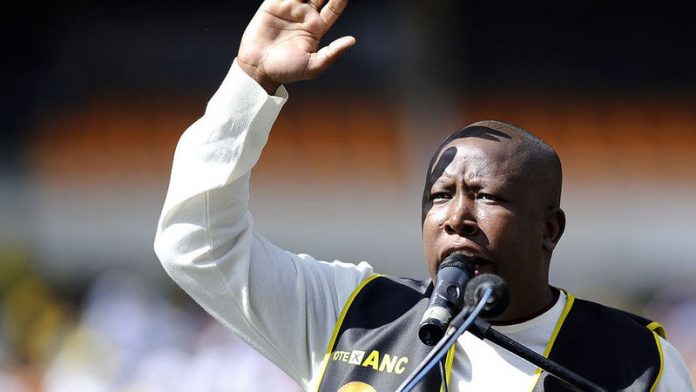 "The government is caring only about themselves. They don't care about you," Malema told a large crowd. Earlier on Thursday, the former youth league president launched his new platform the Economic Freedom Fighters (EFF).

Malema, EFF spokesperson Floyd Shivambu and businessperson Kenny Kunene had attended an urgent application brought by lawyer Dali Mpofu for the state to fund the legal representation for the victims of the Marikana shootings.

Police shot dead 34 striking Lonmin miners and wounded 78 in Marikana, North West, on August 16 while trying to disperse them. The inquiry is into the events surrounding the shooting, and the deaths of 10 people in strike-related violence the previous week.

A large group of miners and their families had gathered in front of the court since Thursday morning, and they sang and danced in Church Square. Some held up placards reading: "Don't let the police get away with murder".

"They pay only the lawyers of murderers. Those who have killed people are getting money."

Phiyega is 'a useless person'
Malema called national police commissioner Riah Phiyega "a useless person", and said that is why she was unable to answer any questions during the inquiry.

Referring to Zuma and Police Minister Nathi Mthethwa, he said: "They must know they will go down in history as murderers".

He said the Farlam commission was a serious matter, as people who were found to have been in the wrong could go to jail. He told the cheering crowd they were constitutionally entitled to legal representation.

"They are not doing you a favour."

He said the government had already decided the people were wrong and believed they were criminals.

"That commission, I personally don't trust it," Malema said, adding he believed it had a predetermined outcome.

Malema urged the crowd to "fight for a monthly wage of R12 500. We must do everything in our power to force them [the commission] to give you that R12 500."

The demand for a R12 500 monthly wage was what motivated the miners' strike in August.

October 31 deadline
During the court proceedings, Mpofu told Judge Joseph Raulinga it was unlikely the commission would finish its work by the extended deadline of October 31.

Mpofu represents the miners wounded and arrested during the shooting on August 16, at the commission's hearings.

He said the legal team had not received any funding for June to October, and suggested interim relief, so as not to interfere with the commission, which is due to resume on Monday.