Noise and the city: Hong Kong’s struggle for quiet 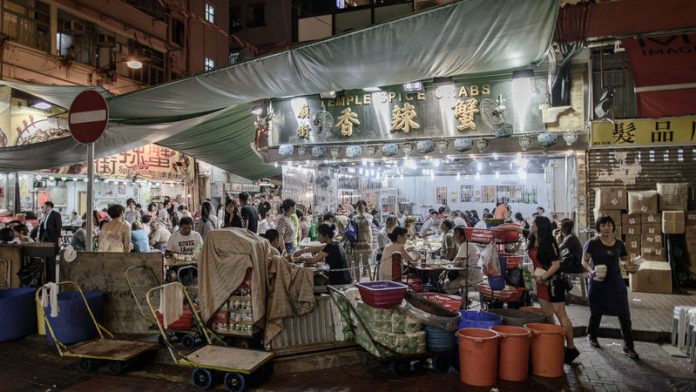 In a densely-packed city with a shortage of housing, older buildings are frequently torn down and replaced as developers snap up prime real estate. On the roads the battle between buses, trams and cars is won by the piercing drone of continuous car horns.

For banker Kenny Chen, 35, the last 15 months have been a nightmare as the area around his apartment block in the upmarket central Mid-Levels neighbourhood has surrendered to juddering construction sites.

"To lay the foundations they have to pound steel into the ground which happens twice a day – the noise and the vibrations are really affecting us," he told AFP, saying that as one construction project finished, another two began.

"My wife had twins a month ago – she was on maternity leave at home but because of all the noise she became very anxious and possibly the babies did too. She ended up giving birth two and a half months early."

His neighbour Debra Rull, a 60-year-old homemaker from Hong Kong who has lived in the city for 50 years, says the noise has got markedly worse in the last decade.

"The construction and roadworks are getting quite something to put up with – it's continuous. I think the government is concentrating too much on urban renewal."

Affecting lifestyles
Hong Kong may boast some of the world's most expensive apartments, but rapid growth in the past 30 years means residents live cheek by jowl even on the outskirts of the city beside busy main roads. While air pollution continues to be a major concern in the city, noise is also affecting lifestyles.

"Noise is a major environmental problem – it's an important aspect of our quality of life that is being compromised," Professor TW Wong, a research professor specialising in public health at the Chinese University of Hong Kong, told AFP.

"We need to do more to protect the residential population."

Wong was part of a research team on a government commissioned report last year that found noise was "the most often complained (about) issue of the living environment".

Traffic, renovations, neighbours, construction and demolition were the worst bugbears, with sleep disturbance and general annoyance the biggest health effects.

"Annoyance is a valid measure of mental health," Wong told AFP. "A large proportion of people are sleep disturbed. There should be a lowering of the acceptable levels of noise."

A form of torture
The government has brought in measures including resurfacing roads, restricting hours for construction work, promoting the use of quieter machinery and creating better-insulated homes, but many residents still suffer.

"The building shakes and you feel it through your chest when you're sitting on the sofa," he told AFP – but it's the drivers leaning on their car horns outside his flat which he hates the most, seemingly undeterred by regulations.

In 2011 the government included the effects of noise for the first time in its regular Thematic Household Survey Report, which showed that 36 percent of people had suffered noise disturbance at home. Seven percent said they were "disturbed a lot or nearly all the time".

The effects on mental health can be detrimental, says Assistant Professor Arthur Mak of the department of psychiatry at the Chinese University of Hong Kong.

"For people with anxiety and depression noise can exacerbate their condition," he told AFP.

Patients who live in public housing have even gone as far as asking him for a medical recommendation for them to move elsewhere. Relocation can take up to two years.

Reduction
"I have done that lots of times, where the level of noise is contributing adversely to mental condition," said Mak. "The people asking for it are desperate."

The EPD figure has decreased slightly over the past decade, a reduction it attributes to the steps it has taken.

It admits, though, that more than a million residents are exposed at home to traffic noise over the government's 70-decibel guideline, also the World Health Organisation's recommended limit.

"We are finding sites to construct residential buildings because we are facing a shortage of flats. We understand that people will find it noisy and we try to control it with the restricted hours," Yeung told AFP –although some residents complain that works are done outside those hours, which is possible with a special permit.

Yeung added that the government was dealing with problems "inherited" by the rapid expansion of Hong Kong in the last three decades — the population has gone from 5.7 million in 1990 to over 7 million today.

Public policy think tank Civic Exchange, which recently submitted a critique of noise policy to lawmakers, says the authorities could do more.

"If you are not providing a good environment, whether it's for citizens or business, the competitiveness of Hong Kong will decrease," said CEO Yan-yan Yip, calling for more research into advanced technologies and the strict implementation of current noise restrictions, as well as public education.

"I think there are ways that we can get both development and quality of life," she says. "We are talking about green growth — green and development, instead of green or development." – Sapa-AFP