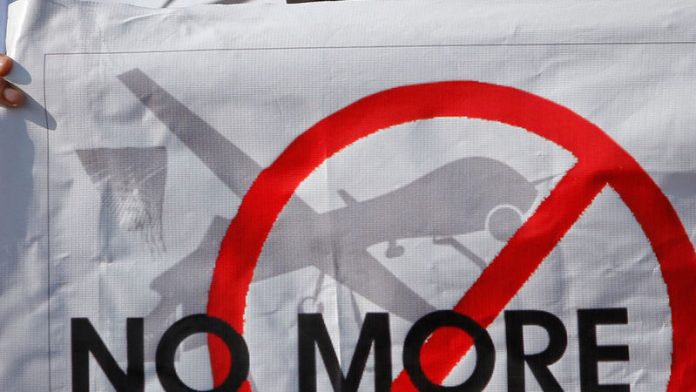 At least nine suspected militants, including two foreigners, have been killed in Pakistan's lawless tribal region in a US drone strike and a separate Pakistan military operation, security officials said on Sunday.

Pakistan has seen a spate of militant attacks since Prime Minister Nawaz Sharif took office last month, putting pressure on his team to act more aggressively to curb the insurgency.

Missile strikes by unmanned US aircraft have inflicted the most damage against Taliban fighters in the mountainous areas straddling the Afghan border in past years, sometimes with heavy civilian casualties.

In the third such attack since Sharif came to power, two suspected militants riding a motorcycle were struck by missiles in the Mir Ali area of North Waziristan on Saturday night, one official said.

"The two men, probably Arab nationals, were passing through Mosaki village when the drone fired two missiles and hit them," said the official.

Their identities were not clear. Another security source said they were foreign militants of Turkmen origin.

Drone attacks impacts
It is difficult to check the impact drone attacks have on both militants and civilians because independent observers and journalists have almost no access to the areas where most of the strikes occur.

The government, while condemning drone attacks as a violation of its sovereignty, wants to appear decisive in its own efforts to combat militants on its soil and has vowed to map out a new security strategy to tackle the insurgency.

"These areas are known as strongholds of the militants from where they stage deadly attacks in Kohat and Peshawar," one official in Kohat told Reuters on condition of anonymity.

Pakistani military officials believe mountains linking the Orakzai, Khyber and Kurram tribal areas are one of the main strongholds for the Taliban-linked militants in Pakistan.

Seeing flames
Another senior military official in the northwestern frontier city of Peshawar confirmed that air strikes had taken place "somewhere between Orakzai and Khyber".

"We could hear the sounds of fighter jets and see flames when bombs were dropped in the mountains," Shafqat Hussain, a local resident in Kohat, said of the overnight operation.

Many Taliban and their al-Qaeda allies fled Afghanistan to Pakistan's tribal areas after the US invasion in 2001. They retreated even deeper into the mountains following a Pakistan army offensive in 2009, launching attacks from places where ground forces cannot reach them. –