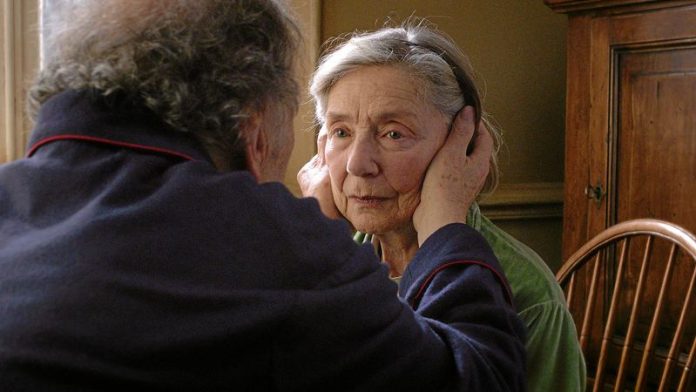 “Love” is boiled down to something elemental, something like survival, or perhaps the exact opposite, though calling it L’Amour might have been to risk a pun.

This is Haneke’s second Cannes Palme d’Or winner and shows the director as a filmmaker of incomparable seriousness and weight. This is a passionate, painful, intimate drama to be compared with Ingmar Bergman’s Scenes from a Marriage.

When I first saw Amour, I wrote that Haneke’s severity and mastery resounded like an orchestral chord – an idea that I now realise was indirectly inspired by the start of Franz Schubert’s Impromptu being played in the opening scene’s piano recital.

That severity in Haneke’s movies had in the past an edge of sadism, to both his characters and audiences. It appears to have lessened a little in recent years, and arguably lessens here. His characters are closer to ordinary sympathetic humanity, with ordinary foibles and absurdities. But there is no question of Haneke softening. The deliberate chill, the measure of liquid nitrogen, is still there.

The drama is a chamber piece consisting mostly of two characters, Georges and Anne, retired music teachers in their 80s, played by Jean-Louis Trintignant and Emmanuelle Riva. They live in Paris in an elegant, book-lined apartment where Anne’s baby grand piano is a central feature. They are very happy; their interest in life is undimmed, and they are still in love.

On returning from a concert given by a former pupil, Georges playfully and gallantly tells Anne that she looks very pretty. But soon disaster strikes – Anne suffers the first of two strokes, complicated by what appears to be vascular dementia. While she is still able to speak and reason, Anne makes Georges promise never to put her in a hospital or a home; and so, as her condition deteriorates, Georges must care for Anne in the flat, without normal palliative care, until her final hour.

Their apartment is to be their Calvary. Georges’s face is etched not merely with the cares of age but also with fear: the person whom he loved and loves is beginning to vanish before his eyes. As Anne’s life ebbs away, so does her identity. Is their love itself being dismantled?

Relations of teaching music
?Students of Haneke’s films will see the traces of the earlier work. As in his ordeal shocker Funny Games, people are menaced by a malign agency that has somehow insinuated itself into their private space. Tellingly, there’s evidence of a break-in attempt at their apartment – the lock has been damaged by a screwdriver.

As in The Piano Teacher, music, and the power relations of teaching music, are important; Isabelle Huppert, the star of that film, returns here as Eva, the couple’s grown-up daughter. And Amour resembles Haneke’s nightmarish The Seventh Continent, particularly its chilling scene where a little girl terrifies her parents by pretending to have gone blind.

Trintignant’s performance as Georges is disturbing and enigmatic – at no point does he lose his composure and break down. It is as if he needs to conserve all his energy and emotion for the impossible task ahead. With courage, good humour and gentleness, Georges and Anne confront their destiny, and in the shadow of death their relationship is deeply moving.

As the situation advances, Haneke shows how the outside world begins to lose its meaning. A visit from the former pupil whose concert they had attended is well meant, but deeply misjudged; even his daughter and son-in-law Geoff (British performer William Shimell) become irrelevant to their barricaded existence. Georges and Anne are thrown back, almost primevally, on each other.

And, throughout it all, we, the audience, have superimposed on our collective retina an awful memento mori image from the flash-forward sequence that begins the film.

It is a gesture of mystery and menace and shock that only Haneke could create. The icy message may be that love is not a consolation as we face death. Rather the reverse. Love will give your death meaning, but make it no less unbearable. – © Guardian News & Media 2013

It’s the odd that makes the Durban film festival

The Durban International Film Festival begins on July 18 and, in keeping with its role as SA's leading festival, it features a huge range of movies.
Read more
Advertising
Continue to the category
Politics