NUM burns: The mighty have fallen 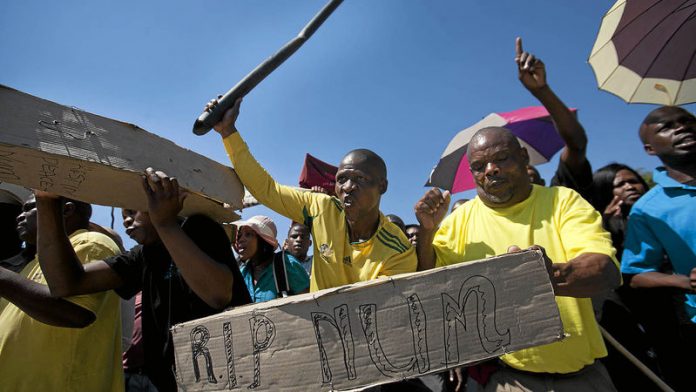 The National Union of Mineworkers (NUM) has not only lost its majority on the platinum mines but its dwindling membership has seen it forfeit its prestige position as the largest Cosatu affiliate.

This means it will suffer a financial blow as it will lose millions of rands in fees each month.

The National Union of Metalworkers of South Africa (Numsa) announced last week that it was the biggest affiliate of trade union federation Cosatu, because the latest figures show it has 320 000 members.

Irvin Jim, Numsa general secretary, told the Mail & Guardian that the new numbers were submitted to Cosatu at its request and that all the federation’s affiliates were asked to do so.

Jim said the union could not inflate its figures as it would have to produce the fees to back up the membership numbers.

Cosatu insiders say the NUM will now move to fourth spot in terms of size — after Numsa, the National Education Health and Allied Workers Union and the South African Democratic Teachers Union.

A senior Cosatu leader, who asked not to be named because of the sensitivity of the matter, told the M&G that the NUM’s membership now stands at less than 250 000, after it revealed it had lost more than 40 000 members during Cosatu’s central executive committee meeting last month.

NUM loses
Labour analyst at Adcorp, Loane Sharp, said by his calculations on losses in the platinum sector alone the NUM could rank as low as sixth in terms of size.

The NUM does not dispute that it has lost the 40 000, but it claims that the loss comes off a higher base.

It denies that the loss of members will result in the union dropping in rank to fifth or sixth in size within Cosatu.

In 2012, Cosatu reported that the NUM had more than 310 000 members but NUM spokesperson Lesiba Seshoka said the membership numbers had dropped from 327 000 in 2012 to 287 000 when official numbers were last produced in May this year.

“Why would people within Cosatu say that until there has been an audit. If they are saying that, it is their responsibility to offer proof … I think it is people who are desperate to see NUM go down [who spread these rumours].”

Cosatu mum
Cosatu spokesperson Patrick Craven said he “would certainly not like to comment” on whether the NUM has slipped further in ranking than reported and could only comment on the official figures once they are released.

Regardless of the ranking, Seshoka said size does not affect the weighting of an affiliate’s vote on Cosatu matters. But what it does affect is cash flow.

NUM general secretary Frans Baleni could not say what a member pays in membership fees because it is confidential information, intended for union members only. However, a number of industry sources say the general rule is 1% of income — although a cap comes in at a certain level.

“On average a safe number would be R80 per person per month,” said one senior executive at a platinum mine.

According to Sharp’s calculations, the loss could be as much as ­R45-million a year.

At the top
Looking at the stop orders at Impala, Lonmin and Anglo Platinum mines, it appears that the NUM has lost at least 45 000 members at Rustenburg mines, the mining executive said.

This does not include the gold mining sector, where the Association of Mineworkers and Construction Union (Amcu) is now said to hold about 17% membership overall.

It has recently claimed the status of majority union at a few mines such as Sibanye Gold’s Driefontein mine, and is said to also have a majority at Harmony Gold’s Kusasalethu mine, AngloGold Ashanti’s Mponeng mine and the Blyvooruitsig mine, although it is yet to be officially recognised.

“It is an absolute hammer blow. They may never recover,” said labour law expert Andrew Levy. “It is indicative that [the NUM] has lost sight of reality, of responsibility and of their membership.”

Levy said that, financially, this will immediately put the union under huge cash flow restrictions.

“They are soon going to be asking how can we pay our bills … it is quite likely staff will start to defect.

“I have great doubts that [the NUM] will recover. Its ability to recover is dependent on Amcu’s ability to survive,” said Levy.

He said the most likely outcome is further fractured relations in mining.

Labour law expert Tony Healy agreed such a hit is not just bad news for the NUM but Cosatu too. Its loss in membership and the rise of Amcu will mean increased union rivalry and the consequences of that rivalry.

“NUM is not going to roll over at Lonmin, Impala and Driefontein. We can expect them to come back strongly in terms of membership drives,” Healy said.

And all of this is generally disruptive, he said, and caused great concern among investors.

Sharp said Cosatu’s facts are self-serving and seek to underplay the significance of Amcu.

“Factions rivalries, self-interest, corruption — all of these things mean a dramatic change — like the loss of NUM could make Cosatu unsustainable in the long run,” said Sharp.

“This is such an exciting development. It is the most important development in the labour market in 25 years. Nobody thought Cosatu was vulnerable, but here it is.”

Findings
According to the findings of the Cosatu Workers’ survey for 2012, a third of union members said there was corruption in their unions, and one in seven said they had personally experienced it.

More than 20% of respondents belonging to the NUM said they had personally seen corruption — higher than all of Cosatu other affiliates’ members.

Amcu’s general secretary, Jeff Mphahlele, said that its membership has jumped from between 40 000 and 50 000 a year ago to a conservative estimate of 130 000.

Mphahlele said he believed that Amcu has made inroads in the sector and could well be “neck and neck” in terms of membership numbers in the gold mining sector.

However, Seshoka stood firm that the NUM is by far the majority in the gold mines and aims to have it stay that way.

“Of course we are working around the clock to make sure we don’t lose members in the gold sector … and we are in the process of rebuilding our membership in platinum mines.”