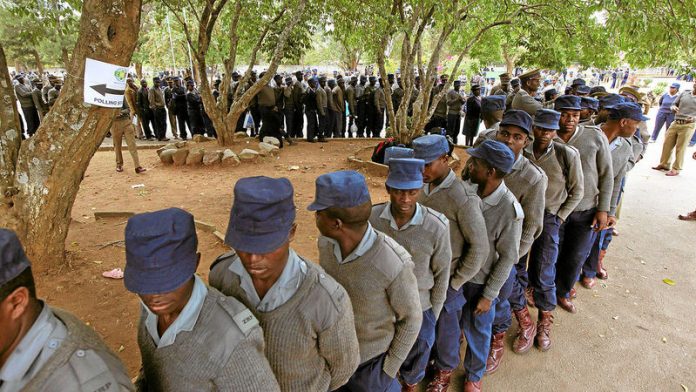 If the special voting process conducted by the Zimbabwe Electoral Commission (ZEC) this week is anything to go by, then Zimbabwe’s July 31 poll will be a nightmare.

The lack of readiness, owing to time constraints and limited funds, was evident during the special voting by security forces on Sunday and Monday.

Police and other members of the uniformed services were due to cast their ballots over the two days as they will be on duty on election day. But that voting was marred by logistical chaos.

It emerged this week that the ZEC had still not received adequate funding from the treasury, with just over a week before the polls.

The electoral body asked for $133‑million, but had only received $38‑million by last week.

Most of that money has been used for voter registration, the sitting of the nomination court for candidates and the special voting process.

No funds
Last week, ZEC chairperson Rita Makarau said she was expecting the treasury to release an additional $95‑million, but Finance Minister Tendai Biti said the government did not have the funds.

“Nothing has changed. We do not have the money,” said Biti this week.

Police spokesperson Charity Charamba said the chaos during special voting was due to delays caused by the MDC-T’s court challenges over the electoral process.

But MDC-T spokesperson Douglas Mwonzora told the Mail & Guardian that the delays had nothing to do with his party.

“It’s clear that the ZEC is ill-prepared and it’s also clear that the decision to fast-track the election without the necessary preparations and resources has backfired. We are in this position because of Zanu-PF’s foolishness and hard-headedness,” he said.

At some centres, voting could not take place on Sunday because ballot papers were not available.

Shortage of ballot papers
The ZEC said it had been unable to print enough ballots because of problems with printers and candidates who had submitted photographs late.

Voting delays extended into Monday and, in some cases, Tuesday. On Monday evening, at the Town House voting centre in Harare, the anti-riot squad arrived to control policemen who were trying to force their way into the polling station after spending several hours waiting for ballots to arrive.

The police said they had also spent all of Sunday queueing to vote. There were also reports of frustrated police breaking windows in Mount Pleasant on Sunday.

The delays and ensuing chaos have resulted in questions being asked about how the ZEC, which could not properly manage the 80 000 special voters in two days, will cope with six million registered voters in one day in the harmonised elections.

Biti, who is also the MDC-T secretary general, said his party had observed numerous anomalies.

Voters' roll not used
He said that in Mashonaland Central presiding officers refused to sign off the voting tallies with election agents at the end of the vote.

At some centres such as Mabvuku, Biti said, the voters’ roll was not used, and in certain areas MDC-accredited agents and monitors were expelled.

ZEC officials who asked not to be named told the M&G that the commission had resorted to desperate measures.

“We are trying everything within our means to make things work, but we are limited by the lack of financial resources. We have really done our best, even bending over backwards to negotiate credit from our service providers. We are in a dilemma because time is running out,” said one official.

Zimbabwe has sought funding for its polls from the international community, including the United Nations Development Programme (UNDP).

The UNDP helped to fund Zimbabwe’s constitution-making exercise, but the body wanted to send an election assessment team to the country before guaranteeing funds.

UNDP team blocked
The team was blocked, however, after it said it wanted to meet members of civil society, diplomats, churches and political parties. Harare turned down its offer.

Zimbabwe also sought funding from the Southern African Development Community (SADC), but nothing has materialised.

“SADC leaders have invested so much time and effort in Zimbabwe,” said an SADC diplomat in Harare.

“The region was ready to assist, but the controversy surrounding the electoral process has not been helpful. No one wants to fund a sham election.”

Makarau apologised for the chaos, saying the ZEC will ensure that those who failed to cast their ballot this week can do so on July 31.

But the MDC-T’s Mwonzora said that legally anybody who had applied for a special vote should not vote in the normal election.

He said the MDC did not want anyone to be disenfranchised, but asked the ZEC to produce the numbers of those who were not able to vote “because there is a real danger of double voting”.

​Heartwarming #ElectionDay as the personal becomes the political for voters