Legodi resigns from arms commission on eve of hearings 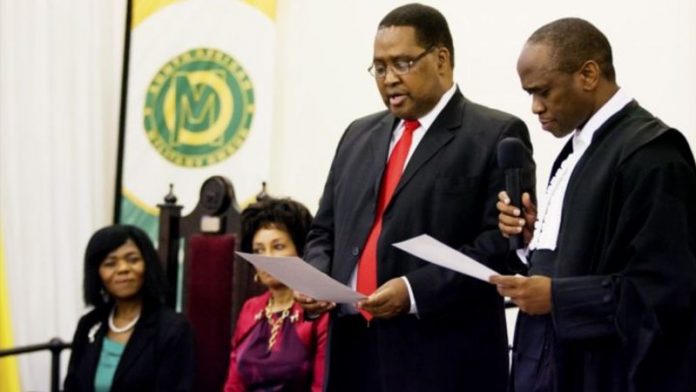 His resignation comes on the eve of the public hearings, which start on Monday.

The decision by Legodi to resign from the commission follows the dramatic resignation in January of senior researcher Mokgale Norman Moabi, whose resignation letter was leaked to the Mail & Guardian. In his letter Moabi claimed the commission chairperson, Judge Willie Seriti, had a "second agenda" and was running a covert operation.

Legodi is known to have been unhappy with the secrecy surrounding the workings of the commission, the covert handling of the documentation, and the fact Seriti ruled with "an iron fist", according to sources close to the process.

The departure of Legodi is also expected to create a stir among witnesses and whistleblowers at the public hearings, who have expressed concern about the credibility of the commission since Moabi's departure.

In another blow to the commission, after Moabi's sudden resignation, law researcher Kate Painting also walked off the job in March and told her colleagues she was quitting her post to retain her integrity.

Painting accompanied Seriti on trips abroad to attempt to get documentation from foreign investigators on allegations against ANC government officials and others allegedly involved in corruption in the arms deal scandal.

The trips to London and Germany yielded little for the commission, as the team came back empty-handed, the M&G was told.

Concern
Legal sources close to events told the M&G some evidence leaders are equally concerned about the workings of the commission under Seriti.

While Legodi is expected to "go quietly" as he is still employed by the justice department, his departure allows him to keep his integrity intact, said the sources.

It is expected Legodi will report back to work at the North Gauteng High Court on Thursday.

At the time, the M&G asked the commission why Legodi was tackling complex cases, and whether he had resigned. The commission denied it, but it is believed that in the end Legodi could not be persuaded to stay.

The spokesperson for the commission, William Baloyi, declined to comment. "I can't comment on that," he said. "This is a matter for the presidency."

Mac Maharaj, spokesperson for President Jacob Zuma, could not be reached for comment.

Extended arms inquiry expected
Zuma was considering extending the commission of inquiry, according to the presidency on Wednesday.

"President Jacob Zuma has received and is considering a request to extend [it] by 12 months," Maharaj said.

The commission's term was due to expire in November. Its public hearings were scheduled to start next week.

Former president Thabo Mbeki, Minister in the Presidency Trevor Manuel, Former Intelligence Minister Ronnie Kasrils and Congress of the People president Mosiuoa Lekota were some of the people expected to testify in the first phase of the inquiry.

The commission, which is probing the R70-billion arms procurement deal, would hold public hearings from August 5 until January 31 at the council chambers of the Sammy Marks Conference Centre, Pretoria.

The deal, which was initially estimated to cost R43-million, has dogged South Africa's politics since it was signed in 1999, after then Pan Africanist Congress MP Patricia de Lille raised allegations of corruption in Parliament.

Zuma himself was once charged with corruption after his financial adviser Schabir Shaik, who had a tender to supply part of the requirements, was found to have facilitated a bribe for him from a French arms company.

The charges against Zuma were dropped in April 2009. – Additional reporting by Sapa