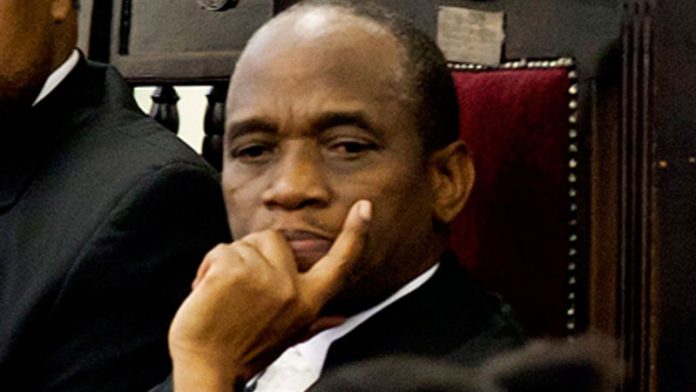 Mokgale Norman Moabi, the former senior researcher at the Arms Procurement Commission who caused a furore when he resigned in January, has commended commissioner Judge Francis Legodi for "listening to his conscience" and quitting his post.

In his resignation letter, Moabi claimed commission chairperson Judge Willie Seriti had a "second agenda" and was running a covert operation.

Legodi resigned on Wednesday, on the eve of the opening of the public hearings in Pretoria next week.

Several sources familiar with events said Legodi had indicated he was unhappy with the secrecy surrounding the workings of the commission, the covert handling of evidence by Seriti and the commission's head of legal research Fanyane Moses Mdumbe; and the way Seriti ruled with an "iron fist".

Contacted for comment about Legodi's departure, Moabi told the Mail & Guardian he had heard the news.

"I commend the judge for having listened to his conscience and subsequently leaving the commission," said Moabi. "People should be very wary and watch what unfolds at the commission, if it proceeds. Particularly if any evidence will be heard in camera, for alleged security related issues in the interest of the State."

Moabi declined to elaborate on why he believed any aspect of the public hearings would be heard in camera, and the commission spokesperson William Baloyi could not be reached for comment.

Turmoil
The commission has been thrown into turmoil after the esteemed commissioner resigned, with its credibility already severely damaged after Moabi quit his post. His dramatic resignation was followed in March by the exit of the commission's law researcher Kate Painting, who also walked off the job.

While Painting has declined to speak to the press, her colleagues at the commission said she quit her post to retain her integrity.

Painting accompanied Seriti on trips abroad in a bid to get documentation from foreign investigators on allegations against ANC government officials and others allegedly involved in corruption in the arms deal scandal. The trips to London and German yielded little for the commission, as the team came back empty-handed, the M&G was informed by sources familiar with events.

While Legodi is expected to "go quietly" as he is still employed by the justice department, his departure allows him to keep his integrity intact, said the sources. It is expected Legodi will report back to work at the North Gauteng high court.

At the time, the M&G asked the commission why Legodi was tackling complex cases while working at the commission, and asked whether he had resigned. The commission denied it, but it is believed that in the end Legodi could not be persuaded to stay.

Latest setback
One of the witnesses called to the public hearings is David Maynier, who is the Democratic Alliance's spokesperson on defence and military veterans.

Maynier said Legodi's resignation was a serious concern, and it was one of many setbacks for the commission.

"The resignation of Judge Legodi is therefore the latest setback in a series of setbacks that have plagued the Commission," he said.

Maynier was due to be heard at the first session of the public hearings starting next week, but Seriti announced a revised 24-person list of witnesses.

These include former president Thabo Mbeki, former defence minister Mosiuoa Lekota and his deputy Ronnie Kasrils, the trade and industry minister at the time of the arms deal, Alec Erwin, and then finance minister Trevor Manual.

While the line-up is weighty, the M&G has been told that this session of public hearings will be a scene-setter and witnesses will not be cross-examined on corruption allegations that have emerged against ANC officials and others.

Not one of the 12 original witnesses for the first session of public hearings were included on the list, including arms consultant Fana Hlongwane who had surprisingly appeared on the list with whistleblowers.

While some witnesses and whistleblowers have been informed by the commission they will appear in the first quarter of next year, concerns are growing as the commission appears to have run out of money, and recently requested an extra R20-million from the justice department. Others close to the commission have queried whether there is the political will required for the whistleblowers to take the stand.

Tension growing
Legal sources told the M&G that some evidence leaders are equally concerned about the workings of the commission under Seriti.

The arms deal, which is believed to have cost between R45-billion to R70-billion, has dogged South African politics since it was signed in 1999, after Cape Town's mayor Patricia de Lille raised allegations of corruption in Parliament when she was a Pan Africanist Congress MP.

The M&G ran the story that Legodi had resigned on Wednesday night, but the presidency waited and put out a nation-wide statement late on Thursday morning.

Zuma thanked Legodi for his contribution and wished him well in his future endeavours. Despite the presidency's best efforts, tensions are growing among arms deal witnesses, whistleblowers and members of the public who had hoped this commission of inquiry might finally put the long-running arms deal corruption story to rest.

It is critical that efforts to put quality seeds in the hands of smallholder farmers, who represent 70% of Africa’s agricultural production, are accelerated.
Advertising