US charges two men with illegally lobbying for Mugabe 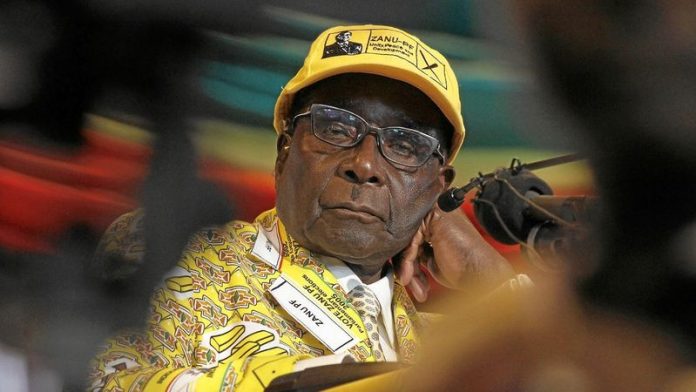 United States federal prosecutors have announced charges against two Chicago men, who they accuse of illegally lobbying US lawmakers to lift sanctions against long-time Zimbabwe's President Robert Mugabe and members of his regime in exchange for a promised $3.4-million.

Prince Asiel Ben Israel (72) and Gregory Turner (71) allegedly tried to persuade unnamed US state and federal lawmakers to oppose the sanctions against Zimbabwe.

The charges against them indicate that the men met with Mugabe, Zimbabwe Reserve Bank governor Dr Gideon Gono and other officials "multiple times" in the US and in Africa, and allegedly agreed to lobby US federal and state officials on Zimbabwe's behalf in exchange for the promised payments, which the defendants apparently weren't able to collect in full.

The accused allegedly also got several unnamed state and federal lawmakers to write letters expressing their interest or commitment to helping Mugabe and Gono, arranged for Mugabe to meet with federal and state government officials in New York and attempted to get Gono and other Zimbabwean officials on a list of speakers at a forum hosted by a Californian member of the House of Representatives.

According to the charges, Ben Israel and Turner began talking with Mugabe and other Zimbabwean leaders in early November 2008 regarding the influence they could exert to lift the sanctions originally imposed by former US president George W Bush.

The defendants allegedly discussed with Mugabe, Gono and others their ties to several public officials who supposedly had close connections to then-President-elect Barack Obama.

‘Consulting agreement’
The complaint states that Ben Israel and Turner engaged in public relations, political consulting and lobbying efforts and had a "consulting agreement" from November 2008 that called for an initial payment of $90 000 and three subsequent instalments of $1.1-million each.

The defendants allegedly arranged for Ben Israel to travel to South Africa with two Illinois lawmakers in early December 2008. Travel records allegedly show that the two lawmakers travelled to Israel, but did not return as scheduled and extended their overseas stay.

Three days after the men from Illinois return in mid-December, a scheduler for President-elect Obama's transition team sent an email to another transition team member saying that one of the two men "wants a phone call from [transition team officials] regarding a meeting he had last week in Zimbabwe. I am not sure who to pass this on to but it's the second time they have called."

The transition team forwarded the email on to the FBI based on its concerns that the state representative may have violated sanctions by traveling to Zimbabwe.

No lawmakers have been accused of wrongdoing, although the investigation is ongoing, the US attorney's office in Chicago said in a news release.

It's not illegal for public officials to meet with sanctioned Zimbabweans, but the sanctions do bar US citizens and residents from providing lobbying, public relations and media consultation services to the designated nationals.

20-year penalty
Ben Israel appeared in a federal courtroom in Chicago on Tuesday, where the terms of his bail were changed to require him to remain in contact with the court's pre-trial services department. His wife, Hattie Brown, also appeared in court and promised the magistrate that she would turn in her husband if he attempts to flee.

The complaint against the pair alleges that they violated the International Emergency Economic Powers Act. The violation carries a maximum penalty of 20 years in prison and a $1-million fine.

Ben Israel's attorney, Viviana Ramirez, said that it's too early to address the merits of the case. Turner, a Chicagoan, is believed to be currently living in Israel. A warrant has been issued for his arrest.

Mugabe's government has been under sanctions since 2003 for alleged democratic violations.

Obama has decided each year of his presidency to keep the Zimbabwe sanctions in place, most recently in March 2013.

Mugabe (89) has been president of Zimbabwe for 33 years. He was re-elected by a wide margin last week, although his political opponents say voting wasn't free or fair and was marred by widespread irregularities.– Sapa-AP, AFP