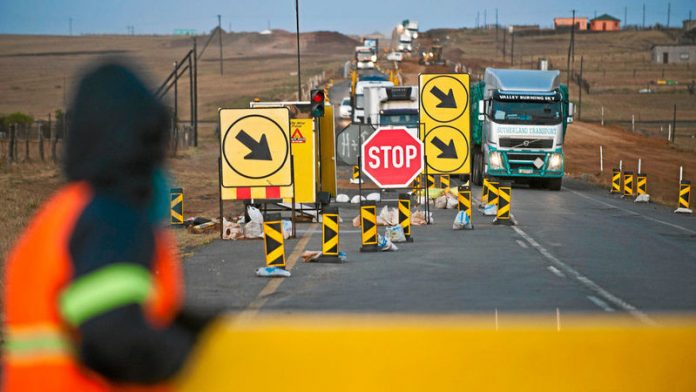 Three contractors and about R200-million later, motorists have yet to benefit from a rehabilitated road between Koster and Lichtenburg, connecting Gauteng and the North West Province.

The 50km stretch of road has been under construction since 2009 and four years later it is still incomplete. Construction was halted for the third time last week after losing bidder Roucomm Systems successfully interdicted the continuation of work on the road.

The company went to court, alleging irregularities that raised questions about how the department of public works, roads and transport had awarded Tau Pele Construction the R72.5-million tender despite the bid falling short on several requirements.

The tender is now scheduled to be reviewed after the North West High Court in Mafikeng accepted evidence presented by Roucomm that a review is necessary.

Roucomm was initially recommended for the tender by the bid evaluation committee, but the department instructed that Tau Pele, which was disqualified in the early stages of the bid process, should be given a second chance.

The acting communications director in the department, Wandi Tong, disputed the contention that Tau Pele was disqualified and subsequently reconsidered.

However, the Mail & Guardian saw a compliance verification document, which remarked that Tau Pele submitted one identity document that was not certified and two expired validity certificates, contributing to its disqualification.

In court, however, Roucomm presented more evidence for why Tau Pele was the “wrong” winner: the company had been under business rescue since September 2012, which in effect meant that it was “commercially bankrupt”, according to a Roucomm official. Tau Pele needed financial assistance of at least R43.8-million to pay suppliers and subcontractors, as well as salaries and wages.

Roucomm is demanding a R15-million settlement, which is the amount the company says could have been its profit if tender processes had not been meddled with.

Tong said the department followed every lawful step regarding the tax clearance certificate, letter of good standing and business rescue in the evaluation process. She said the department is not aware of Roucomm’s compensation claim and that “there is no basis for payment of such”.

The role of consultants in securing the contract for Tau Pele is also under scrutiny. Bagale Consulting, the project manager appointed by the department, is accused of helping to put pressure on consulting engineers Mothibatsela & Associates to reverse the decision to disqualify Tau Pele.

After Mothibatsela filed a tender evaluation report that put Roucomm on top, Bagale’s Tony Richardson wrote to Mothibatsela, saying the uncertified ID that formed part of the reasons Tau Pele was disqualified should have been disregarded because it is “for an individual who is not listed as a company director. It appears to be a document which is superfluous and as such not a reason for disqualification,” said Richardson’s letter to Tshipa Mothibatsela, managing director of Mothibatsela & Associates.

In the email communication Mothibatsela tried to resist the pressure, saying tender requirements were clear to all bidders.

“I therefore do not understand why on earth the ID of Mr Vumile Gogela, who you tell me is a non-director, would be submitted unless there was a sinister motive,” Mothibatsela wrote. “Our adjudication was based on documentation submitted by the tenderers and I am not about to selectively disregard some of the submitted documentation.”

However, Mothibatsela eventually gave in. He said: “We attach a copy received from Bagale Consulting of the compliance verification on [the] list of bids opened as captured by the client [the department] on which we had based our disqualification of one of the bidders. The roads evaluation committee, however, feels that the elimination of this bidder was unfair and he should be afforded an opportunity to be considered further.”

This week Richardson referred “all queries in this regard” to the provincial public works department.

Tong said no pressure was put on Mothibatsela to change his recommendation, but that discrepancies were found in the company’s report.  “He [Mothibatsela] agreed with the [bid evaluation] committee to rework his report and correct his discrepancies,” said Tong. “As professional engineers they could still have insisted on their opinion.”

It is not the first time construction on this road has been halted. The first contractor, Kaulani Civils, was fired following allegations of poor performance, but not before it was paid R115-million of the R208-million contract.

Down Touch Investments, the second company contracted for R93-million, was paid a R44-million out-of-court settlement in August last year, after it was unlawfully evicted from the site by the government. Down Touch’s work was suspended in 2011, following losing bidder Globul Roads’ contention that it should have been the winner because its bid was R18-million cheaper.

The public works department undertook to ensure the safety of road users “until the matter is finalised by the courts”, Tong said.