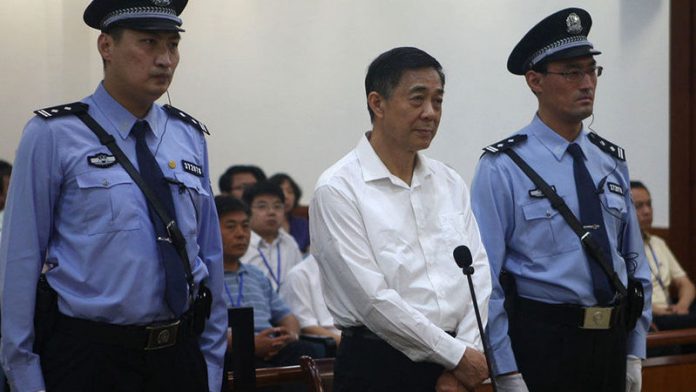 Bo Xilai on Thursday denied bribery charges as he appeared in public for the first time in more than a year. The 64-year-old former Communist Party chief of the south-west city of Chongqing has been charged with bribery, corruption and abuse of power and will almost certainly be found guilty. But his denial of one of the charges could mean that he will not go quietly.

President Xi Jinping, who wants to rebalance the world's second-biggest economy, will be keen to put the trial behind him with a minimum of fuss to ensure stability and party unity. Bo's downfall has pitted supporters of his Maoist-themed egalitarian social programmes against the capitalist-leaning economic road taken by the leadership, exposing divisions within the ruling party as well as Chinese society.

His trial in the eastern city of Jinan marks the culmination of China's biggest political scandal since the 1976 downfall of the Gang of Four at the end of the Cultural Revolution.

Appearing sombre, a clean-shaven Bo, whose hair looked like it was still dyed black, stood in the dock without handcuffs, according to a picture issued by the court. He was dressed in a long-sleeved white shirt and stood with his hands crossed in front of him, flanked by two police officers.

"Regarding the matter of Tang Xiaolin giving me money three times, I once admitted it against my will during the Central Discipline Inspection Commission's investigation against me," Bo said, referring to the party's top anti-graft body.

"[I'm] willing to bear the legal responsibilities, but at that time I did not know the circumstances of these matters, my mind was a blank."

State television said Bo did not contest the evidence shown in court.

Bribes through his wife
Bo was charged with receiving about ¥21.8-million in bribes from Xu Ming, a plastics-to-property entrepreneur who is a close friend, and Tang Xiaolin, the general manager of Hong Kong-based export company Dalian International Development, the court said.

He received the bribes through his wife, Gu Kailai, and his son, Bo Guagua, it said, citing the indictment.

It was the first time that authorities had named the younger Bo in the case against his father. Guagua is now in the United States, pursuing a law degree at Columbia University.

Bo's language suggests that he could fight the charges against him, and the court account did not say whether he had or would plead guilty to any of the charges.

A guilty plea would almost certainly signal he has worked out a deal for leniency, but he is likely to plead not guilty to the abuse of power charge to show that he is a victim of a power struggle, according to a source with ties to the leadership.

"The court session proceeded in an orderly fashion," he said.

Two-day trial
Bo's trial will last for two days and the verdict is likely to be in early September, state broadcaster CCTV said.

The Jinan Intermediate Court said on its microblog feed that five of Bo's family members and 19 journalists attended the hearing. In another picture published by the court, Bo's siblings appeared to be in court. The court said over 100 people filled the courtroom.

Underscoring popular support for Bo, a handful of supporters protested outside the courthouse for a second day to denounce what they said was politically motivated persecution. Police, who had blocked off the courthouse, hustled them away.

One protester's sign read: "The Chongqing experience is good for the country and the people, common prosperity is what the people want". Another held up a photo of Mao Zedong.

Bo also allegedly embezzled ¥5-million from a government project in the north-east city of Dalian, where he served as mayor, the court said.

The charge of abuse of power against Bo relates to the murder case involving Gu, the court said. Bo was a rising star in China's leadership circles when his career was stopped short last year by the murder scandal involving Gu, who was convicted of the November 2011 murder of British businessperson Neil Heywood, a business partner and family friend.

Bo's former police chief in Chongqing, Wang Lijun, has also been jailed for trying to cover up the case. Bo was furious with Wang when he was told that his wife was a murder suspect, and sacked him despite not having party authority to do so, sources with knowledge of the case have said.

Neither did he report the matter to his bosses in Beijing, all of which led to the abuse of power charge, they said.

Victim of a power struggle
"Bo violated regulations to block the investigation of the murder in which Bogu Kailai was a suspect," said court spokesperson Liu, using Gu's official but rarely used name.

Nevertheless he has been seen by his backers as the victim of a power struggle. Bo's downfall has triggered heated debate between his leftist followers, who are nostalgic for the revolutionary ideals of the Mao Zedong era, and reformers, who advocate faster political and economic change.

Bo could face a death sentence for his charges, though a suspended death sentence is more likely, which effectively means life imprisonment, or a 20-year term.

The trial will be watched as a test case of China's commitment to the rule of law, especially whether Bo will be given a chance to defend himself.

Yet his guilt is an almost foregone conclusion given that prosecutors and courts come under Communist Party control. Courts have a 98% conviction rate.

The new administration of President Xi, who formally took the reins of state power in March, will likely trumpet Bo's case as a success in its fight against deep-rooted corruption. – Reuters