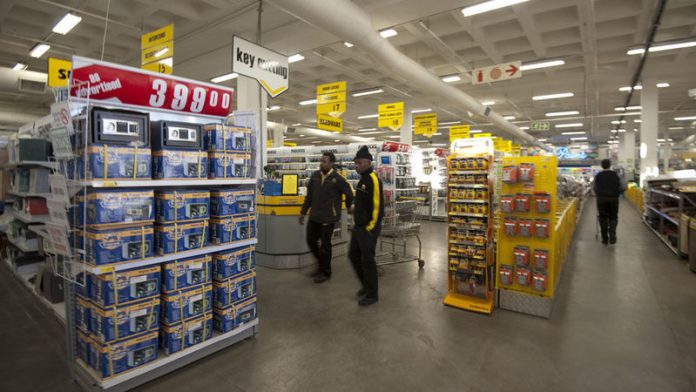 Massmart Holdings, the South African food and goods wholesaler owned by Wal-Mart Stores, said sales growth slowed down. Sales advanced 8.9% to R32.37-billion in the 26 weeks through June 23, the Johannesburg-based company said on Thursday. That compares with a 15% increase in the six months through December 23.

Earnings per share excluding one-time items and foreign-exchange gains fell 9.4% to R392-million. When foreign exchange movements are taken into account, earnings climbed 52%. “Disposable income levels are fragile,” chief executive Grant Pattison said in the statement. “Total retail capacity needs to be reduced, competition for market share will increase, and new avenues for growth need to be found.” Those with lower incomes are particularly under pressure, he said.

Massmart, which owns the cash and carry chain Makro and DIY specialist Builders Warehouse, said sales would continue to be under pressure for the remainder of the year and most of management’s focus will be on maintaining market share and reducing costs. The company, in which Bentonville, Arkansas-based Wal-Mart Stores has a controlling stake, maintained the half-year dividend at 146 cents a share.

Flagging growth
Massmart shares fell as much as 2.9% and traded 1.5% lower at R152.39 by 10.14am in Johannesburg on Thursday, increasing this year’s decline to 20%. The stock hit an almost two-year low when the company said on August 13 its first-half earnings per share had declined.

South African retail sales rose at the slowest pace in eight months in June as flagging economic growth and rising joblessness curbed consumer spending. The unemployment rate climbed to 25.6% in the second quarter from 25.2% in the previous three months as the labour force expanded and the retail, finance and construction industries cut jobs.

Massmart will focus on introducing new lines in its clothing and e-commerce units, the company said. This will include the introduction of George, a clothing brand owned by Asda, Walmart’s UK subsidiary, into Game and Makro stores.

Sales in Africa outside of its home market, which account for 7.6% of sales, increased by 10.7% in rand terms, the company said. – Bloomberg

Preparing graduates for the workplace