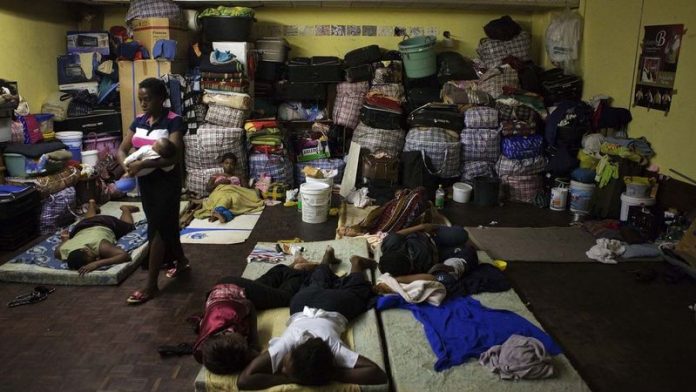 These words, from We Need New Names (Random House), the debut novel of a festival panellist and Zimbabwean author NoViolet Bulawayo, capture migration both as a collective phenomenon and as  something deeply personal and emotive.

Too often, however, the image of the collective overshadows the personal journey. Migrants are represented in the mass media or in politics as groups inhabiting camps, mines or slums, as masses flooding into alien countries, or victims of mob violence. The personal journeys – the disappointed hopes, lost loves, family quibbles, weddings and funerals, the daily experiences of hope or failure – have little public space.

In the panel discussion Migration: There Was a Country, we will explore the ways in which the more intimate journeys of migration can be told without ignoring the powerful social and political forces shaping migrant journeys. What role can these stories tell us of our ideas of home or ­country?

We Need New Names tells of 10-year-old Zimbabwean girl Darling's abandonment by her father, who has migrated to South Africa. He returns home only when dying of Aids, and the narrative follows Darling's migrant journey to the United States.

The narrator's voice is, however, not the voice of a victim but riotous, tender and funny. It tells the story of political violence and turmoil as witnessed by a gang of guava-stealing kids – the brutal innocence and humorous violence no less stark.

Academic responses
Achmat Dangor, another novelist on this panel, explores themes of journeying and exile in his new collection of short stories, Strange Pilgrimages (Picador Africa). The stories, focusing on both the apartheid and post-apartheid eras, chronicle the transient and fleeting forms of refuge on offer to exiles and migrants – sex and physical intimacy offer a temporary sanctuary from politics and struggle.

In one of the stories, Goodbye, Goodnight, a returned political exile sits sketching a poem in a Fordsburg café – "think of the wayward lusts, you may inspire in the wayward, traffic of clowns".

The notion of "pilgrimage" offers a power motif to explore the journeys of migrants: migration is not only flight but also a journeying to some promised, perhaps sacred, space across the border. The sacred space may be safety or a site of healing, but there are also private pilgrimages, as Dangor explores: pilgrimages to the sources of memory and longing.

At this session, we launch the eBook, Writing Invisibility: Conversations on the Hidden City, a collaboration between the Mail & Guardian and the African Centre for Migration and Society.

The book – eight long-form narrative nonfiction pieces and academic responses to these – is a collection of the invisible pilgrimages that crisscross the city. It tells the stories of sailors, graffiti artists, hairdressers, prophets and corpses all on their own migrant paths. The writers trace the intimate journeys that are made invisible against the spectacle of violence and politics.

But the book, which also shows that invisibility itself can be a refuge,  revolves around a series of dialogues between academic analysis and narrative writing and plays on the tension between the political and the intimate.

The city is a locus for a multitude of journeys that intersect and become entangled. Writing Invisibility explores how individuals rebuild their lives in the aftermaths of violence.

The contribution, The Bookseller of Kibera, by panellist Caroline Wanjiku Kihato, is not a story of migration as such but of how individuals are displaced and remake their worlds in the aftermath of violence. It tells the story of a bookseller re-establishing his store in a Nairobi slum devastated by ethnic violence. The story shows how people can became  migrants without moving – the world around one can change suddenly, irreparably.

Panellist Kwanele Sosibo, in his contribution to Writing Invisibility, charts the journey of the corpse of a miner who was found hanged in the aftermath of the Marikana massacre. The story explores the importance of the spiritual world in finding meaning in death, and how the rural home remains a locus of meaning even for those living in mine and peri-urban settlements.

In my own contribution to Writing Invisibility, I explore the migrant journeys of prophets in the city: Old Testament motifs of exile, promise and salvation are refigured in the city: the mine dump replaces the holy mountain, the highway holy ground. Prophecy becomes a way of articulating the daily but disregarded troubles of the present.

Writing Invisibility aims to prompt reflection on how individuals negotiate the adversities and possibilities of the city, how they are made invisible or choose invisibility, how their journeyings become a way of finding meaning. To narrate the intimate and personal is not to efface the political: it is rather to show the ways in which politics enters into, ruins and disrupts the lives of families and individuals. Telling personal narratives allows the possibility to resist the reducing of migrants to a collective, which is the violence of nationalism and xenophobia.

Taking this line, we will also explore the meanings of home, hospitality and refuge.

Christa Kuljian's book, Sanctuary (Jacana), on the Central Methodist Mission in central Johannesburg, is a compelling narrative of the possibilities and limits of hospitality.

Radical hospitality
The mission, led by the charismatic and controversial Paul Verryn, opened its doors to migrants, refugees and the homeless over the past decade. In the anti-immigrant violence of 2008, it was a place of safety and refuge. The mission courted controversy – being accused by local business, law firms and childcare nongovernmental organisations alike of creating a space rife for violence, criminality and child abuse. It remains, however, a site in which the dispossessed and displaced seek sanctuary.

Kuljian's book, sympathetic but critical, captures both the possibilities and adversities of what she terms "radical hospitality". The mission is, in a sense, an experiment in open borders – a place where no one is turned away. But with this comes an attendant disorder.

Kuljian's work investigates how we understand the limit to refuge and hospitality. At what point does a sanctuary turn into a slum, and does refuge incite riots? The city is a space of possibility but refuge is fought for, not given.  These are central and fraught questions facing the City of Johannesburg.

In this panel, we also host Wandile Zwane from the city's migrant health desk. It is one of several ways the city aims to support and welcome its migrant population.

But what are the limits to hospitality, to care, in the context of a country that also has one of the largest deportation rates in the world?

The state is viewed by many foreign migrants as ambivalent: on the one hand it offers support, care and healing, on the other many migrants suffer continual police harassment and, for those who are undocumented, the risk of deportation.

We will ask in this panel: How can the personal stories of migrants shape, if at all, the politics of migration, and whether stories do have the ability to cross the frontiers of the state?

Matthew Wilhelm-Solomon is a researcher at the African Centre for Migration and Society at the University of the Witwatersrand. He will chair session nine, Migration: There was a Country, on Sunday September 1, from 12.30 to 2pm. The panellists are NoViolet Bulawayo, Christa Kuljian, Caroline Wanjiku Kihato, Kwanele Sosibo, Achmat Dangor and Wandile Zwane