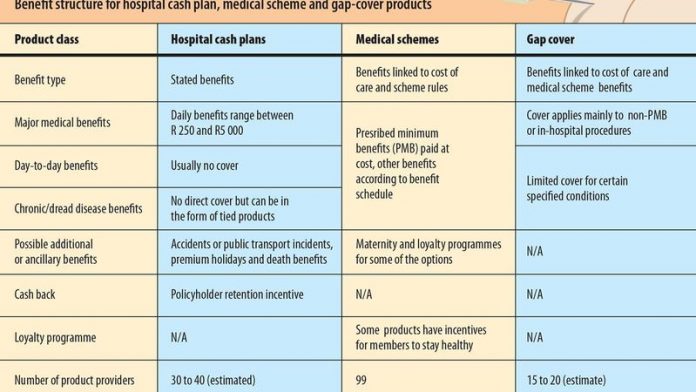 The effect of insurance products on private medical schemes is a concern to policy experts. As South Africans battle rising healthcare costs, the use of these products to help to pay medical expenses is increasing.

But ongoing government efforts to regulate these products have left insurance providers uneasy about the future of offerings such as hospital cash plans and other insurance options, such as gap cover.

Health policy experts and civil society groups have warned that these products threaten to cannibalise medical aid schemes and undermine the social solidarity principles that underpin them by ensuring that the young and healthy subsidise the elderly and sickly.

But insurance association bodies argue that they clearly meet a need, and this will persist as private healthcare costs continue to rise and the state seeks ways to fund public healthcare adequately — notably through the long-delayed national health insurance scheme.

Research into the hospital cash plan market was prepared by Lighthouse Actuarial Consulting and released by the Finmark Trust in September last year. It goes some way towards revealing the complexity of these issues.

The price of medical aid cover is still seen as too expensive for many South Africans, with only 16% of people covered by private medical schemes, it noted.

Many don't qualify for free state healthcare
Meanwhile, many lower- to middle-income earners do not qualify for free state healthcare, as individuals earning R6 000 or more a month are required to pay for government services — leaving this segment of the market poorly covered. This has contributed to the appeal of products such as hospital cash plans.

The difference between what medical aid schemes pay out to beneficiaries and what doctors and specialists charge has left many scheme members out of pocket, giving rise to products such as gap cover.

The research revealed that the market for these products has expanded in recent years. An estimated one million to 1.5-million policies have been sold, covering about 2.24-million people.

The research estimated that the market was roughly 27% of size of the medical schemes market. At the time of the report’s release, between 50 000 and 75 000 policies were being sold monthly.

The report found that hospital cash plans products are less expensive than the cheapest open income-rated medical schemes for most ages and cover levels, as they offer significantly lower benefit levels and apply lighter underwriting conditions.

It also found that they offer those who earn below R6 000 a month some form of protection against direct and indirect costs, particularly in a state facility.

Hospital plans
Although hospital cash plans are unable to cover private hospital care, they offer “affordable value to low-income members of the population who use public hospital facilities but have to pay for services under the state means test”.

The report said that using insurance products to deliver health cover is “not ideal”. These plans have limitations — they are not available to people over 65, they only provide benefits if exclusions are met such as no pre-existing health conditions, HIV infection and they set waiting periods on claims.

“Even given these flaws, hospital cash plan products can be a very effective and affordable means of providing some form of cover to low-income individuals who would have no alternative option available to them,” the research found. “This is especially true in the instances of serious medical events requiring prolonged periods of hospitalisation.”

But the continued proliferation of such products will have a devastating effect on medical schemes, and in turn broader healthcare, according to Alex van den Heever, chair of social security systems administration and management studies at the University of the Witwatersrand’s graduate school of public and development management.

A valid market for these types of products is where they ameliorate related costs of unplanned medical emergencies, such as transport or loss of income during a hospital stay.

The Medical Aid Schemes Act enshrines a rights-based approach to healthcare, protecting the elderly, sickly and people with pre-existing conditions from discrimination by medical schemes. Products in the insurance environment offer no such protection, said Van Den Heever.

Unfettered growth in this market would see the “rights-based framework of medical schemes improperly deregulated by the back door”.

In a bid to address the difficulties posed by these products, the treasury, the financial services board and the department of health published draft revised regulations on the demarcation between health insurance products and medical aid cover early last year.

The regulations have caused some consternation in the insurance sector, particularly amid gap cover providers such as Guardrisk, which believe that the regulations could prevent consumers from buying gap cover that protects them against unforeseen medical costs.

The Finmark report said that the income replacement limits that the regulations proposed on policies such as hospital cash plans would “hamper the ability of these products to meet the needs of policyholders” and limit the business rational for insurers to provide these products.

Draft regulations
The draft regulations provide that the benefits of health insurance products cannot be related to the cost of treatment, and cap daily hospital cash plan benefits to 70% of a policyholder’s daily income.

Van den Heever, on behalf of Wits, and the Helen Suzman Foundation and public interest law centre Section27 are opposed to these regulations but for different reasons.

In a letter to the ministers of health and finance, they say that, within the proposed regulations, various product categories licensed in terms of the Long- and Short-term Insurance Acts were given permission to operate outside of the Medical Schemes Act.

These categories are wide-ranging and take in important forms of care such as frail care, and HIV and Aids. The regulations also exclude gap cover from the regulations, according to these organisations.

They argued that the provisions allow for the arbitrary withdrawal of the rights provided by the Medical Schemes Act through the approval of substitutive products that have the real potential to systematically exclude from coverage the groups who need medical cover the most — the sick and elderly.

The letter also raised related concerns over industry behaviour and lobbying around these regulations, which it claimed could ultimately undermine the prescribed minimum benefits within medical schemes.

Kept "in check"
Van Den Heever said that, although medical aid schemes are by no means perfect, the current regulatory framework under the Act keeps them “in check”.

Any change in regulations should be made under that Act, not under other legislation such as insurance law, as in this instance.

“If medical schemes were a province they would be the third largest, or the equivalent of the Western Cape, in terms of healthcare coverage, at 8.7-million people,” he said.

“In 10 years time they will grow to the size of KwaZulu-Natal, the second largest. To mess with that is to create a massive mess for South Africa.”

The health department has turned all its attention towards the national health insurance scheme, not concentrating efforts on changes that will affect current conditions on the ground, said Van den Heever.

As the department has “dithered”, these products have proliferated, he said. But Peter Dempsey, deputy chief executive at the association for savings and investment South Africa, said these products, which are not a replacement for medical aid, fill a vital role in defraying medical expenses for many South Africans.

The reality is that people who can afford medical aid care are unlikely to opt out of this kind of coverage entirely, he said.

The industry is agnostic about how these products will ultimately be demarcated, but it wants to see them remain available to consumers, said Dempsey Healthcare costs the world over are on the rise, and the funding of state healthcare is becoming increasingly expensive, even in countries with good public services.

“Until we agree on ways to bring down the cost of healthcare and all roleplayers play their part, this debate will continue to rage 10 years from now.”

Efforts to rein in insurance
State efforts to find a solution to health insurance dilemmas culminated in the release of draft demarcation regulations in March 2012 for public comment by the treasury, health department and financial services board — the ­regulatory authority of the ­insurance sector.

“While there is a role to play for health insurance products in the market, these products need to operate within a framework in which they complement medical schemes and support the social solidarity principles embodied in medical schemes,” said Ismail Momoniat, the deputy director general for tax and financial-sector policy at the treasury.

Given the 343 submissions received, the departments aims to publish revised draft regulations in December for a further period of public comment, before they are finalised and gazetted.

“The envisaged revised draft regulations seek to strike a balance between access to health insurance and ensuring that the cross-subsidisation principles in medical schemes are not ­undermined,” said Momoniat.

Insurance a headache for medical schemes
Hospital cash plans are insurance products, typically sold by a short or long-term insurer, that pay beneficiaries for hospital stays out of a fixed daily amount, usually after day three of their stay.

According to research released by the Finmark Trust, these plans typically offer fixed payouts for hospitalisation of between R250 a day to R5 000 a day for monthly premiums of about R100 to R800.

They are distinct from medical-scheme products, notes the report, which operate under the Medical Schemes Act and are regulated by the Council for Medical Schemes. And, they must meet very different requirements for cover, including the requirement to pay for prescribed minimum benefits, or a list of conditions all medical aid schemes must cover.

Gap cover, meanwhile, is a type of short-term insurance that is available only to medical aid scheme members.

It is designed to make up the difference between what medical aid schemes pay to cover treatments and what specialists and other healthcare service providers charge for treatments In 2008, the council took provider Guardrisk to court over its gap-cover products. The Supreme Court of Appeal found in favour of the insurer, however, allowing the sale of these ­products to continue.

According to the Finmark Trust report, the court case was the catalyst for the review of the demarcation between medical schemes and health insurance offerings, which is not yet finalised.