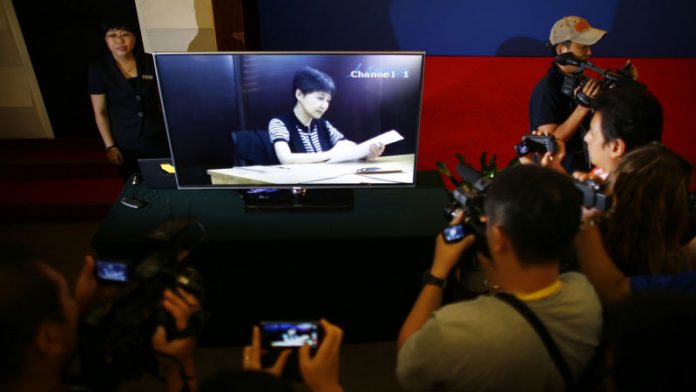 Bo was a rising star in China's leadership circles when his career was stopped short last year by a murder scandal which saw his wife Gu Kailai convicted of poisoning a British businessman.

Bo is now on trial charged with corruption, taking bribes and abuse of power, the last of which is especially sensitive as it involves allegations Bo challenged the authority of the ruling Communist Party.

Despite Bo's feisty defence, a guilty verdict is a foregone conclusion as China's courts are controlled by the Communist Party. State media, which speaks for the party, has already all but condemned him.

Since the trial began on Thursday in eastern Jinan city, Bo has repeatedly said he is not guilty of any wrongdoing and has called his wife's testimony against him the ravings of a mad woman. The trial will be adjourned on Sunday at midday until Monday morning, the court said.

On Sunday, Bo rebutted earlier testimony from his former police chief, Wang Lijun, who carried out Bo's crackdown on crime and gangs in Chongqing, where Bo was Communist Party chief.

Wang said he had told Bo that his wife, Gu, once a glamorous lawyer, had murdered British businessman Neil Heywood, who had been a family friend.

"During Wang Lijun's testimony he is continuing to lie obviously, and what he is saying is totally unreliable, it is full of deception, he's just mouthing off," Bo told the court, according to the court's official microblog.

"He has a vile character, spreading rumours here and muddying the waters."

Glimpse into lives of the rich

Wang said when he told Bo that Gu had poisoned Heywood, Bo was furious and punched him on his left ear, leaving him "bleeding from the mouth", according to Wang's testimony on Saturday. Wang said Bo did not accept Gu's involvement in the murder and had illegally sacked him.

"He said it was not a slap but a punch, but I've never learned how to box and have no great strength to strike out," Bo said.

Wang fled to the US consulate in the nearby city of Chengdu in February last year after confronting Bo with evidence about Gu, according to official accounts.

After first helping Gu evade suspicion of poisoning Heywood, Wang hushed up evidence of the murder, according to the official account of Wang's trial. Wang has also been convicted and jailed over Heywood's murder.

On Saturday, Bo admitted to shaming his country and poorly handling a defection attempt by Wang, but Bo denied trying to protect his wife from Wang's murder accusation.

Many in China have been fascinated by the trial and the unusual decision to carry at least part of the proceedings on the court's official microblog, though what is coming out is likely highly edited.

The testimony has also offered a salacious glimpse into the glitzy lifestyles of China's elite politicians, complete with private jets and expensive foreign holidays, reinforcing a campaign by President Xi Jinping against corruption and opulence.

Communist Party mouthpiece the People's Daily, in a front page editorial on Sunday, warned officials that the "worship of gold and material possessions" was the road to ruin.