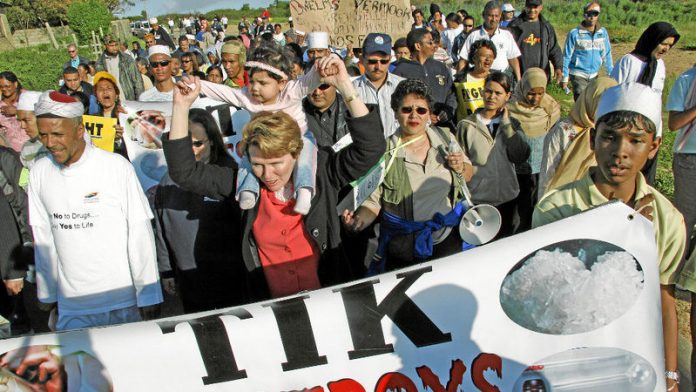 While you were at work on Monday, Helen Zille put down her smartphone long enough to hold a joint press conference with social development MEC Albert Fritz at the provincial legislature in her capacity as the premier of the Western Cape.

Zille and Fritz were outlining the province’s plan to tackle substance abuse in the Western Cape over the next five years.

Zille did not say: “Our crisis of substance abuse is harming another generation of young people worse than even what the Holocaust did to their forefathers. The Holocaust didn’t incapacitate people, but it mobilised them to demand their rights and to claim control of their lives.”

Drug and alcohol abuse is indeed fraying large patches in the fabric of our society. The death camps were bad, but drugs are – wait, what?

If she had, and if she had made that statement online, she would have been breaking the law: Godwin’s Law – also known as Godwin’s Rule of Nazi Analogies – which holds that, “as an online discussion grows longer, the probability of a comparison involving Nazis or Hitler approaches”.

In more basic terms, give any internet discussion thread enough time, and someone will make a comparison to Hitler or the Nazis.

(Thank you for that, Wikipedia. You were very helpful.)

One of the widely accepted applications of the law stipulates that in any argument, the first party who arbitrarily compares their opponent or their standpoint either to Hitler or Nazism for the sake of discrediting their opponent or drawing sympathy to their cause automatically forfeits the result.

Of course, Godwin’s Law is moot (not in the North American sense) when the actual subject of the discussion is Hitler or Nazism.

But in almost all cases, Godwin’s Law protects those of us who keep it from a low-grade level of discourse, in which we might be tempted to usurp the unfathomable agony and long-term emotional suffering of millions of people from a small but brutal chapter of history and apply it to our context for the sake of smiting our opponent’s ruin upon the mountainside of the comment section.

And I’d suggest that an application of that sort has some real value to add to the general political conversation of South Africa, online and offline.

Premier Zille didn’t violate any corollary of Godwin’s Law on Monday. She sailed merrily into unlegislated waters, stood on the prow and shouted: “Land, ho! Look how good I am at making points!”

For the record, her actual remarks were as follows: “Our crisis of substance abuse is harming another generation of young people worse than even what apartheid did to their forefathers. Apartheid didn’t incapacitate people, but it mobilised them to demand their rights and to claim control of their lives.”

For the majority of South Africans, nothing was, and could ever be, worse than apartheid, regardless of the “benefits” of agency that Zille outlines.

But that’s a separate branch of the discussion.

Also, one cannot imagine Helen Zille ever daring to compare a localised (or even national) social malaise with the atrocities of the Holocaust.

By poor choice of analogy, Zille reinforced existing barriers between her party and South Africans at large, and relegated the very serious issue of substance abuse in the Western Cape to the bottom of the conversational agenda.

With that in mind, I propose a solution – a law.

The law asserts the following: as a discussion between South Africans grows longer, the probability of a comparison involving apartheid or the National Party approaches.

Like Godwin’s Law, common application of this law would stipulate that, in any argument, the first party who arbitrarily compares their opponent or their standpoint either to the National Party or apartheid for the sake of discrediting their opponent or drawing sympathy to their cause automatically forfeits the result.

Judicious application of this law to our online debates will save us a lot of time, as well as a lot of energy that would otherwise fuel the insatiable furnace of our barely controlled outrage.

The road to rational discussion is a long one. This won’t be an easy law to enforce.