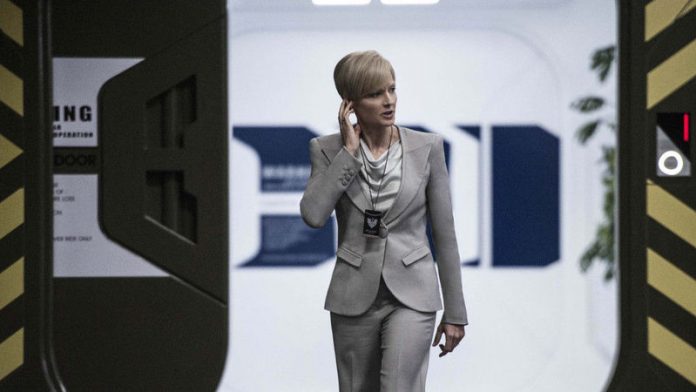 Not only do the 1% live in the land of milk and honey, but for them death and disease can be wiped clean by a quick recline in a day-bed structure called a Med-Pod.

But the rich of the future are not content with the high walls and boom gates we use today to corral in the wealthy and keep the poor out. They have built themselves Elysium, a habitat out in space, which they protect with ferocity.

Jodie Foster plays their militant guardian, Secretary of Defence Jessica Delacourt. In her sharp and shiny power suits and with her clipped speech (and a hard-to-place accent), she kisses her children by day and by night she blows up intruder ships to secure her nation’s borders. Tired of the pesky president with moral inhibitions, she plans to take over the top seat.

Her collaborator and the one man who regularly travels down to Earth, Carlyle (William Fichtner), does so only to watch over the business interests that fund their spaceship home. He goes around this filthy Earth under heavy guard, careful not to be breathed on by the workers. Of course, many of the poor left behind on Earth, who are plagued by poverty and disease, will risk it all to get to Elysium: the crippled mothers with dying children pay a fee to a renegade group so that they can get fake ID codes burned on to their arms, which will allow them a ride up to Elysium.

Max (Matt Damon) dreamed of getting up there when he was an orphaned child. But his yearning dissipated as his adult life devolved into one of crime. Now out on parole, he’s holding down his first real job at the power plant owned by Carlyle, a power plant that makes robots, weapons and machinery. Max has resigned himself to a life of working-class servitude.

That is, until he is exposed to deadly radiation at the plant–and now his life depends on his being smuggled up to Elysium to be cured in a Med-Pod.

Lacking the necessary resources, Max agrees that in exchange for his free ride he will capture the heavily guarded Carlyle to get all the information in his head, codes that will open up Elysium to Earth. It’s a suicide mission, but Max suits up and that’s when the real action starts.

If you know nothing else about Elysium, you should know by now that this is South African filmmaker Neill Blomkamp’s second science-fiction thriller, after the much-lauded District 9. And you would have seen images of Sharlto Copley, who played an everyman character in District 9, doing the red-carpet rounds since the movie’s opening overseas.

Copley, who seems to be to Blomkamp what Denzel Washington was to Spike Lee (Copley and Blomkamp are collaborating on Blomkamp’s next movie, Chappie), plays one of the movie’s key characters, the villainous and psychotic Kruger. Like District 9, Elysium belongs to Copley.

Damon makes a tolerable action hero of his character, if you don’t mind yours baby-faced. Not even Foster makes that much of an impression.

To play Kruger, the hulking mercenary killer contracted by Delacourt to keep the masses under control, Copley keeps his Pretoria Afrikaans accent and dialect (“we’ll sort this kak out”). Any discernible humour in the movie comes from him.

Like District 9, the movie carries the themes of inequality and apartheid, where the disenfranchised live in a place of complete desolation, their lives policed by robots.

But, for all the similarities, Elysium lacks the emotional impact of District 9. There’s no character you can latch on to or root for. The human relationships, such as that of Max and his love interest, or his friend, or those between mother and child, fail to move you.

It’s so hard to root for Max that one switches sides–in a scene in the middle of the movie, when Kruger gets blown up and I thought he’d died, my heart sank.

Not that the movie isn’t worth watching. Apart from the South African connections and the relevant themes, though it is, for me, a very standard Hollywood action movie.

Mostly, what it did for me was make me want to watch District 9 again.