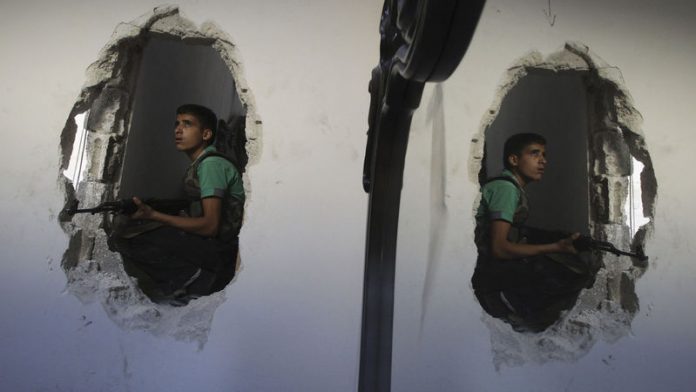 The United States said on Friday it was planning a limited response to punish Syria's President Bashar al-Assad for a "brutal and flagrant" chemical weapons attack it says killed more than 1 400 people in Damascus two weeks ago.

But Islamist rebels are wary, particularly experienced foreign militants who have joined their ranks and may have seen at first-hand US military campaigns and drone strikes on al-Qaeda fighters across the region.

Islamist forces have cleared many of their bases of fighters, vehicles and weaponry, according to rebels and sources close to al-Qaeda-linked fighters.

"Of course we've been moving our fighters and equipment. Do you think we trust the Americans?" said a fighter from the moderate Islamist rebel group called Liwa al-Islam, speaking by Skype from a suburb outside the capital Damascus.

"They gave Assad two weeks' notice to clear his bases. We know we're the real target."

Al-Qaeda-linked groups such as the Nusra Front and the Islamic State of Iraq and the Levant (ISIL) appear to be taking even more extensive and secretive measures.

"ISIL has evacuated many of its centres, mainly in northern and eastern Syria. They've increased security for the emirs [leaders], changing their locations and their cars – they fear homing chips could have been placed in the cars," said a source in Lebanon who is close Qaeda-linked groups in Syria.

"But they are essentially hedging their bets. There's too much to lose if no precautions are taken," he said. "Syria has provided jihadists with an incredibly valuable opportunity to establish a concrete foothold in the heart of the Middle East."

Syria, which sits on the faultlines of several sectarian and ethnic conflicts in the region, has been mired in years of conflict that has killed more than 100 000 people.

Foreign powers have been deadlocked over action, and Western forces have grown increasingly hesitant as radical Islamist groups rose to power in an uprising that began as peaceful protests against four decades of Assad family rule.

But US President Barack Obama said chemical weapons use would cross a "red line" and has vowed to take action.

Sharing tips online
Militants have been trading advice online about going into hiding – from tips about food stockpiling to strategic advice on pre-planning attacks to maintain operations while leaders were in hiding.

Lister said lessons from attacks on militants in Mali, Iraq and Afghanistan were being shared on the internet.

Abdullah Saqr, linked to the Fateh al-Islam group that has roots in Lebanon, posted some of his advice on Twitter.

"Start changing your locations and finding shelters, do not move in announced or large convoys. Take the mobile phones from all your fighters and distance them from the leadership to maintain a security layer," he wrote.

"My brothers, the situation is serious, it's not a joke. The Americans are being tricky in timing the attacks, which means it will be nothing more than a surprise attack as happened in Afghanistan or Iraq."

The Islamist source close to the Qaeda groups in Syria said fighters had already redeployed in new hideouts "away from prying eyes", but declined to give further details.

'Abandon the people'
​Activists in rebel-held parts of the northern city of Aleppo said they saw ISIL fighters leaving their bases in large numbers.

"They cleared out their main headquarters and much of the city. All they left behind were a few guards," said an activist in Aleppo, speaking by Skype.

"The others left behind were their social service and proselytising groups. These groups cannot abandon the people." – Reuters