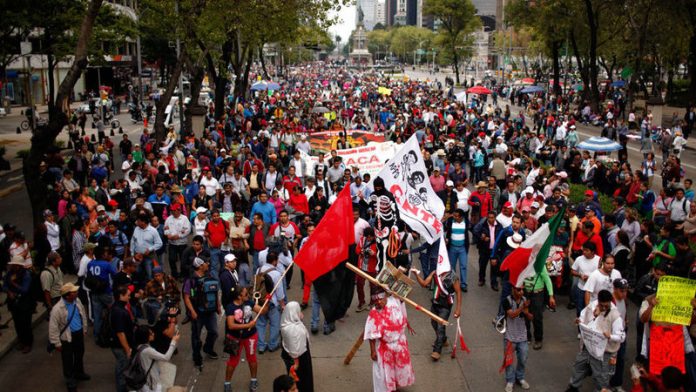 Mexico's Senate overwhelmingly passed a sweeping reform of the notoriously dysfunctional public school system early on Wednesday, handing President Enrique Peña Nieto an important victory in his push to remake some of his country's worst-run institutions.

The Senate voted 102-22 in favour of a standardised system of test-based hiring and promotion that would give the government the tools to break teachers unions' near-total control of school staffing.

That control includes the corrupt sale and inheritance of teaching jobs, and it has been widely blamed for much of the poor performance of Mexican schools, which have higher relative costs and worse results than any other in the 34-nation Organisation for Economic Cooperation and Development.

"The inheritance and sale of jobs has ended," education secretary Emilio Chuayffet said on Twitter. "Merit is the ideal means of access to, and progress in, a teaching career."

The late-night vote clears a path for Peña Nieto to move forward with a series of even more controversial reforms, including a measure that would violate one of modern Mexico's longest-standing taboos by allowing private investment in the state-run oil company.

But there is potential trouble ahead.

Education advocates say a series of concessions to the smaller of the two main teachers unions undermined the reform's ability to create true change in the national education system.

And despite those concessions, the smaller teachers union continued days of debilitating demonstrations in Mexico City, sending tens of thousands of supporters to shut down the capital's main boulevard and protest outside key government buildings on Wednesday. Thousands attended smaller protests in cities around the country. The union also pledged to throw its support behind a weekend protest against the oil reform by leftist leader Andrés Manuel López Obrado.

Taking to the streets
"When Congress is rendered void, the only thing that remains is the streets," leftist Senator Mario Delgado said as a series of his Democratic Revolution Party's objections to specific measures of the reform were rejected in relatively narrow votes.

The education reform initially pitted Peña Nieto against the country's main teachers union – Latin America's largest union and once one of the most important allies of his Institutional Revolutionary Party. The union, known by the Spanish acronym SNTE, fell into line after its head, Elba Esther Gordillo, was arrested on corruption charges in February. She remains jailed pending trial.

A smaller, dissident union known as the National Education Workers' Coordinating Committee, or CNTE, continued protesting and eventually rallied thousands of teachers from poor southern states, paralysing large sections of the capital for more than a week.

In the end, the CNTE won a series of concessions that help protect its members. Reform advocates called the law an important first step but said much more remained to be done in order to change the system.

"It's not everything we would have hoped for but it's an historic change," said David Calderon, director of the education reform advocacy group Mexicans First. "Of course it's just a change in the rules that still has to be turned into reality."

Much of Mexico's educational dysfunction is attributed to the relationship formed more than a half-century ago between the Institutional Revolutionary Party and the teachers unions, which gained increasing control of the education system in exchange for throwing their strength behind the government in the voting box and on the streets.

Over the years the unions developed a virtual lock on teacher hiring and promotion. Almost every new teacher must go through a union to gain a school assignment, a practice that has spawned notorious levels of corruption, including the sale and inheritance of teaching positions.

Fighting for funds
Particularly in states with schools controlled by the CNTE, critics said, union influence has transformed schools from educational institutions into mechanisms for extracting funds from the state. The CNTE has become notorious for threatening elected officials with debilitating strikes and marches in order to maintain and increase benefits that make teaching one of the primary sources of legal income in much of rural Mexico.

Mexico today spends a greater share of its budget on education than any other member of the OECD except New Zealand. Out of that budget, the country spends more than 90% on staff compensation, again higher than any other member of the OECD. That spending doesn't translate into better results or smaller class sizes, however. Only 47 % of Mexican children graduate from the equivalent of high school and Mexico also has the OECD's highest student-to-teacher ratio – 25 pupils to every teacher, on average.

Among the benefits ended by the educational reform are payments of more than $100-million a year by some estimates to thousands of teachers who work full-time as union organisers and rarely, if ever, set foot inside a classroom. Education reform groups have found some union representatives earning hundreds of thousands of dollars per semester.

The rest of the reform focuses on reasserting government control by awarding teaching jobs to the highest scorers on a standardised test instead of funnelling them through a teachers union, a measure weakened by a series of back-room compromises with the CNTE.

Union control
​The law maintains union control over the current crop of teaching students by delaying purely test-based hiring for two years. Serving teachers will have three chances to pass an annual performance test. If they fail all three, they will be moved to an administrative job or given the chance to retire instead of being fired. In another compromise, failing teachers can appeal transfers to local labour law magistrates, a measure that reduces federal control in favour of local officials more easily influenced by the unions.

The law was also weakened by a measure that classifies individual teachers' test results as private, personal information, angering reform advocates who said that broached a key promise to empower parents by giving them more information about their children's schooling.

"Obstacles that kept us from having qualified teachers have been removed, but that's not enough to move the positive part forward," said Calderon. "That requires new study plans, it requires the involvement of universities in teacher training, it requires parents participating more and demanding more."

With the education reform headed to Peña Nieto's desk, still pending are the oil reform; detailed reform of the country's weak tax laws; and strengthening of its telecommunications regulations, which have allowed two families to control most of the multi-billion dollar market while charging prices, particularly for phone service, that are well above global norms. – Sapa-AP

The City of Cape Town tacitly condones it when wealthy landowners behave illegally, something that is not the case if you’re poor
Read more
Opinion

Because of the government’s indecisiveness, we have missed the boat on charting new territory for learning
Read more
Sport

The Indomitable Lions’ class of 1990 put Africa on the international football map with their showing in Italy, where they stunned the world champions. But they have since gone backwards. Why?
Read more
Coronavirus

After unions demanded that schools be closed this week, the department has said it is the cabinet’s prerogative to decide whether schools should close
Read more
Sport

With a world-class gauntlet laid out in front of them, could South Africa make an expectant nation proud?
Read more
Advertising
Continue to the category
Politics