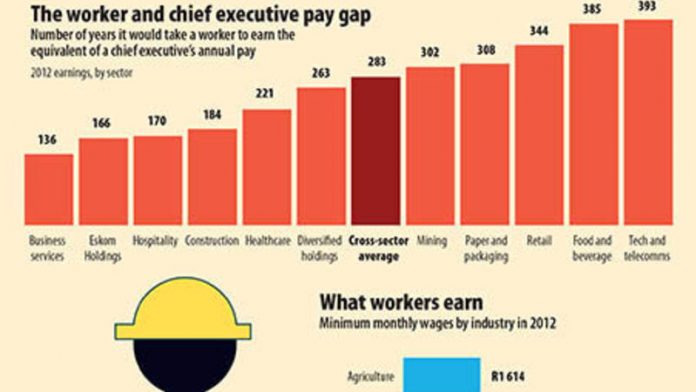 Observers would be forgiven for assuming that the sectors that are continually hardest hit by strikes are those in which the wages are lowest.

However, research shows that two of the three sectors currently on strike are, in fact, the highest paid in the country, with median minimum wages higher than any others.

According to the Labour Research Service (LRS), the striking transport and mining sectors have basic minimum wages of R4 778 and R4 743 respectively, almost 50% higher than the median minimum wage of R3 500 across all industries.

After wage negotiations in the gold sector failed to yield the desired outcomes for the dominant union, the National Union of Mineworkers (NUM), about 80 000 workers at most of the country’s major gold mines downed tools at the beginning of Tuesday’s night shift.

There have been work stoppages in the industry for several years, which lost more than R10-billion due to platinum and gold strikes last year, and experienced a total of 11 strikes in 2011 and 17 strikes in 2010.

Minimum wage demand
This year, the NUM is demanding a wage adjustment of R2 300 for surface workers and R3 000 for underground workers, amounting to an increase of about 60%, which would bring the minimum wage up to R7 645.

However, it has more recently indicated that it may consider revising the wage adjustment to 15%, or an increase of about R700. This minimum wage is a basic salary and does not include company contributions.

Mining producers say their offered increase of between 6% and 6.5% would mean a guaranteed minimum income of R9 170 a month. However, this includes contributions made towards pension funds, medical aids and ­living expenses.

On Wednesday, two small mines settled for an 8% increase, but the NUM did not.

So, why is there ongoing labour action in a sector that has received higher wage increases and has higher median wages than any other in South Africa?

According to Martin Westcott, the executive chair at PE Corporate Services, one of the reasons is protesters’ awareness of the wage differential between the average worker and top executives at their companies.

Chief executive's salary
According to preliminary research conducted by the LRS, which includes information from 33 companies listed on the JSE, the average chief executive in the mining sector earns R12 689 000 a year.

This amount is still moderate compared with some. Nick Holland, the chief executive of Gold Fields, topped the lot at R45-million last year.

“If we include the … wages of executive levels in our graph, the previous benchmarks are dwarfed,” wrote the LRS in its September 2012 Bargaining Monitor ­publication.

“What looked like substantial demands by workers were really just shadows of the total wealth in our economy.”

It compared the workers’ living wage with the median living wage of chief executives, which is R758 000 a month, excluding long-term incentives.

According to George Mthethwa, a researcher in collective bargaining at the LRS, the strikes in the mining sector have more to do with inter-union rivalry than with wages.

Aftermath of Marikana
“It’s no longer about wages, it’s about competition,” he said. The NUM was “trying to impress its members” and avoid losing more supporters.

Similarly, the now-dominant union in the platinum sector, the Association of Mineworkers and Construction Union, had a “standard” to uphold, after negotiating a so-called R12 500 salary in the aftermath of the violence at Marikana in August last year for its members.

In addition to the gold strikes, about 600 technical staff at South African Airways have been off duty since August 26.

Their demand is an increase of 12%, which is 50% higher than last year’s median wage increase of 8%, and double that of inflation.

The median minimum wage in the transport industry is the highest in the country, at R4 778. Nevertheless, according to Mthethwa, lower-band employees feel the effects of inflation more than higher-band staff.

An increase higher than inflation is necessary to negate that, he said.

Wage levels
Westcott cautioned that although wages differed from one sector to the next, they needed to be viewed in context. Wage levels were often in line with the skills required for the job and the risks involved.

The sector has rejected a 10% wage increase offer for its R3 578 monthly median minimum.

According to the NUM’s national motor sector co-ordinator, Elias Kubeka, many of its workers are not getting the salaries they should.

The same applied to workers in the fuel retail sector. At the moment, the stipulated minimum wage for petrol attendants is R3 088, more than R400 lower than the national median.

The National Union of Metalworkers of South Africa (Numsa), which is demanding a 16.5% pay increase for its lower-band workers, will meet the Fuel Retailers Association and the Retail Motor Industry Organisation at the weekend. If negotiations fail, the 72 000 Numsa members in the sector will down tools on September 9.