Twixt the virtual and substantial 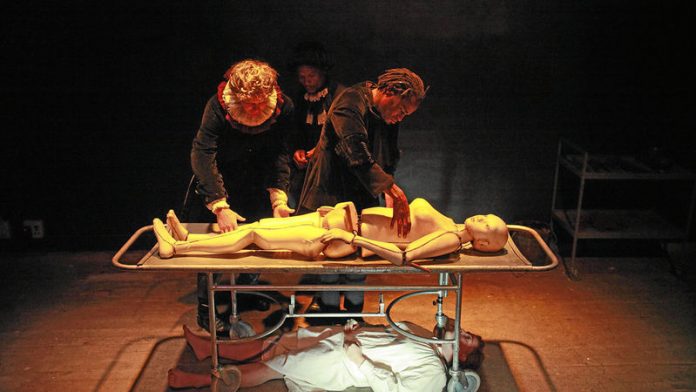 In 1650 a young woman, Ann Green, was hanged for infanticide in Oxford. Her body was handed over to members of the university's medical community for the purposes of anatomy.

This was an opportunity of considerable intellectual (and spiritual) interest. In particular kinds of death — that of the executed criminal, for example — the corpse could be dissected, and examined internally, as part of a vast, diffuse exploration into the workings of the human being. Remarkably, the woman revived on the anatomy table just as the doctors were about to begin their investigations.

This remarkable set of circumstances formed the basis of a new work of theatre that I wrote on a commission from Renaissance scholar Stephen Greenblatt.

In researching the story of Ann Green's "resurrection", I uncovered materials which indicate that, despite her relative anonymity, Ann Green's saga has had a significant impact on the history of neurology as well as philosophy.

The doctor who oversaw Green's recovery, Thomas Willis, is now generally recognised as the father of modern neurology, and there is every cause to believe that her case provoked serious thinking in him. He began to write about "coma", for instance, and the questions raised by the events circulated widely among the Oxford dons. Willis was a member of the Royal Society at Oxford, and he worked closely with several significant young scholars — so it is provocative to consider what impact these events had on shaping understanding of the mind-body split.

Radically interdisciplinary work was being undertaken at the time by this group of researchers and fellows. One of Willis's closest working mentorships was with an exceptionally gifted young scholar, Christopher Wren, who went on to become one of the world's greatest architects.

Wren provided fine illustrations for Willis's great study of the brain; Willis also worked with scientist and engineer Robert Boyle, whose theory of pumps and pressure would inform understanding of blood circulation and the vascular system; Robert Hooke, who was the great engineer of the microscope and whose extraordinary studies of the flea and "the mouth parts of the snail" exploded the world of relative size and scale forever, worked as assistant to Willis and Boyle. It was Hooke who, based on his observations, first referred to the minute units of living matter as cells, because they reminded him of monks' living quarters.

My lecture at the Body Knowledge conference at Wits suggested something of the context of this laboratory of ideas and practices in a sketch of the context of Ann Green's history. That context is not a purely biomedical one: it arises from a conjunction of factors including discourses on infant mortality as well as women's reproductive rights, sex, gender and power in the ideological battles of the Reformation and the Counter-Reformation.

I also discussed my understanding of the dialogue between creative play and historical fidelity when working with archives. In this instance, my conception of the piece arises from my discovery of a woodcut documenting the hanging of Ann Green, as well as from the literary imaginations of Shakespeare and Cervantes, two of the major figures of early modern writing in the West.

That literary link results from the circumstance of the commission of the play. It was Greenblatt who commissioned the work in his ongoing engagement with Shakespeare. In recent years, as part of an editorial enquiry, he has been one of several scholars attempting to define the absolute limits of all verifiable works by Shakespeare, or by Shakespeare with one of several key collaborators.

The text in question here is a so-called "missing" Shakespeare play, Cardenio, and Greenblatt has created a situation through which to grasp some of the resonances of the title of the play, which is the name of a character from Cervantes's novel Don Quixote. My play, After Cardenio, brings together some of the elements explored by both Shakespeare and Cervantes, and considers the perennial concerns of these writers, such as love, death, power, sexual infidelity, loss, brutality and romance.

What I have made is a new theatre work that is not a pastiche of the greats but rather an oblique homage to the writers often invoked as the historical geniuses of theatre and the novel in the West. At the same time, the work arises from the context of contemporary South Africa, in that it is a meditation on the situation of women under patriarchy.

The play is a combination of comic, grotesque, violent and idealised elements such as generally characterised the work of both Cervantes and Shakespeare. Particular themes in the last of Shakespeare's plays are used to shape the action of the plot.

The performance is largely structured around a life-sized vellum puppet. In these terms it might be described as image theatre, but the work also engages with the rich linguistic worlds of these two colossal figures from literary history.

At the conference, I discussed the processes of the making of the play, in particular my collaboration with the performers and with South African artists Penny Siopis and Gavin Younge. I also considered my choice to work with a life-sized puppet figure. I have worked for several decades with the Handspring Puppet Company and am its dramaturg. I have also written extensively on the object, the puppet and the prosthesis.

What provoked my choice in part in this instance was again a matter of history. Ann Green was hanged and revived in 1650, the year the philosopher Descartes died. Descartes has come to represent the philosophical principle of dualism, holding that soul and matter are of fundamentally different substances. In puppetry arts, what is theatrically explored is the power of projective thinking to make inanimate stuff become invested with autonomy and agency.

The play revolves around this 17th-century enquiry in order to raise 21st-century deliberations about the avatar and the human subject, as we explore our own thresholds between the virtual and the substantial.

I have had an ongoing interest in the history of medical modernity using the arts. In August, I gave the opening address at the medical humanities conference hosted by the Gordon Institute for Performing and Creative Arts at the University of Cape Town, on the first South African heart transplant, work that arose out of my novel, The Transplant Men. That talk was presented in what used to be the University of Cape Town's old anatomy theatre, the site that was coincidentally the context in which my play After Cardenio was originally performed.

I have worked in various idioms and modes that touch on this motif of the "resurrected" ones. My enquiry began with Fault Lines and Ubu and the Truth Commission, artistic projects that engaged with the processes of the Truth and Reconciliation Commission.

More recently I wrote the The Transplant Men in a series of meditations about the "second-life" experience of those who have been recipients of organ transplants. And now this play about the "Lazarus-like" experience of Ann Green pursues a line of metaphors and puzzles about identity, continuity and rupture.

​Nanotechnology may one day unlock a mind trapped in the body