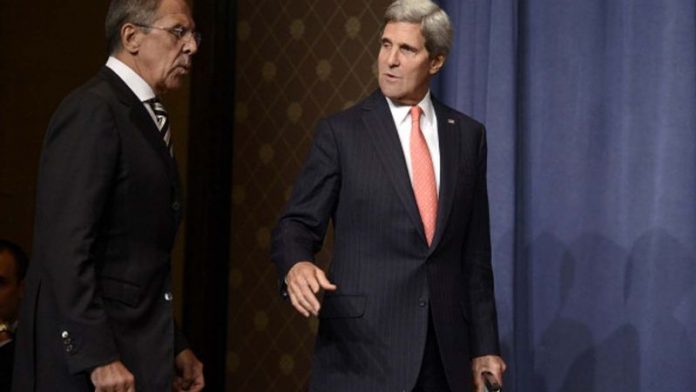 The two powers have given Syrian President Bashar al-Assad a week to hand over the details and location of his regime's stockpile, drastically cutting back on the 30 days usually accorded to new signatories of the international Chemical Weapons Convention.

US Secretary of State John Kerry said Assad's regime must also provide "immediate and unfettered" access to inspectors from the Organisation for the Prohibition of Chemical Weapons (OPCW). "The inspectors must be on the ground no later than November… and the goal is to establish the removal by halfway through next year," Kerry told reporters at a joint press conference with Russian Foreign Minister Sergei Lavrov after they wrapped up their talks.

Echoing a warning from President Barack Obama that military action by the US and its allies remained an option if diplomacy fails, Kerry warned that there must be "no games, no room for avoidance of anything less than full compliance by the Assad regime."

Kerry said the steps agreed on would be encapsulated in a UN Security Council resolution drawn up under chapter seven of the organisation's charter, which provides for enforcement through sanctions, including the possible use of military force.

But with Russia strongly opposed to the use of military threats and wielding a veto on the Security Council, Kerry acknowledged it was "impossible to have a pre-agreement" on what would happen in the event of non-compliance.

Lavrov signalled that Moscow would back some form of sanction, saying the Security Council would act if Syria fails to meet its demands. Kerry also acknowledged that Syria's bloody civil war, which has resulted in more than 110 000 deaths in a little over two years, could only be ended through negotiations between the warring parties – another nod to Russia's opposition to any form of military intervention.

"There is no military solution to the conflict in Syria, it has to be political," Kerry said. "And we together remain committed to getting there."

Lavrov hailed Saturday's accord as an "excellent" agreement that reflected the priorities of both countries. "The aim has been achieved that was set in a conversation between our presidents on September 5 on the sidelines of the G20, about putting under international control Syria's arsenal of chemical weapons," Lavrov said.

Russia's surprise announcement that Syria could hand over its chemical arsenal prompted Obama to put on hold military strikes the US and France had threatened to unleash in response to an August chemical attack near Damascus, which Washington blames on the regime and says killed about 1 400 people.

France on Saturday welcomed the Geneva deal as a breakthrough. "The plan is a significant step forward," Foreign Minister Laurent Fabius said. The US has estimated that Syria possesses around 1 000 metric tonnes of various chemical agents, including mustard and sarin gas, sulfur and VX.

The Russian estimates had been initially much lower, according to US officials, but Kerry said Saturday that the two countries had reconciled their different assessments. He also said it would be feasible to locate the weapons, despite the ongoing fighting in many parts of the country.

"One of the reasons we believe this is achievable is because the Assad regime has taken extraordinary means to keep control of these weapons," he added, noting that the chemical weapons were mainly in regions under Damascus' control. "So that's the silver lining," he said.

"We should not have a problem achieving access to these sites and that will soon be put to the test," he added.

Despite the upbeat tone of Saturday's press conference, Kerry acknowledged that "a hard road" lies ahead and international scepticism about Assad's good faith was underlined by UN chief Ban Ki-moon. Assad seemed to have responded "positively" so far, Ban told France 24 television, "but at the same time I sense in the international community some sense of scepticism."

Ban has also accused Assad of multiple crimes against humanity as he said a UN inspectors' report into the incident, due to be published next week, would provide "overwhelming" confirmation that chemical weapons were used on August 21.

Washington and Moscow are also hoping to revive plans for peace talks in Geneva that would bring together Assad's regime and the opposition to agree a political transition to end the war that erupted in March 2011. Kerry and Lavrov will meet again in a few weeks on the sidelines of the UN General Assembly in New York, with the hope of setting a date for the stalled peace conference.

As the diplomatic drive intensifies, Kerry will fly to Israel to brief Prime Minister Benjamin Netanyahu on Sunday. He will then travel to Paris to meet French Foreign Minister Laurent Fabius and British Foreign Secretary William Hague as well as the Saudi Foreign Minister Saud al-Faisal.  – AFP