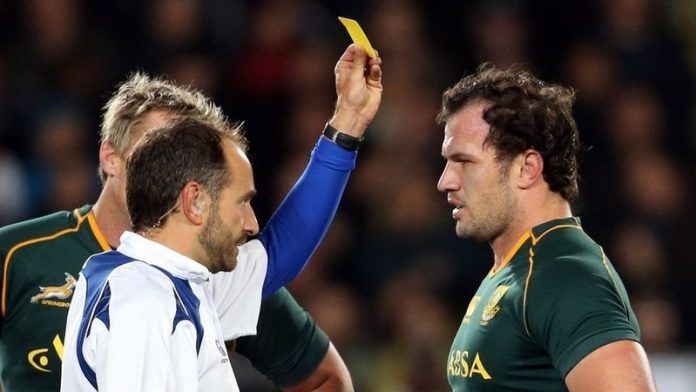 "The judicial officer found that the decision made by referee Romain Poite to issue a yellow card as a result of the tackle by Du Plessis on Dan Carter was wrong, as it was within the laws of the game," Southern hemisphere rugby body Sanzar said on Monday.

"No further sanction was imposed on the player. However, the second yellow card remains on his record for the remainder of the Rugby Championship."

Du Plessis received a yellow card in the 17th minute of the Rugby Championship match in Auckland on Saturday, for what proved to be a perfectly legitimate tackle on New Zealand flyhalf Dan Carter.

Ignored
Poite ignored the advice of the television match official and deemed his tackle to have been high and without arms.

The International Rugby Board (IRB) admitted in a statement on Sunday that Poite had made the wrong decision in carding Du Plessis for the tackle.

"Just as players and coaches make mistakes, the decision was an unfortunate case of human error by the match officials who, having reviewed the match, fully recognise and accept that they made a mistake in the application of the law," the IRB said.

"All match official performances are thoroughly reviewed and assessed by the IRB and are considered when appointments are made for future test matches."

Du Plessis copped a second yellow card in the 42nd minute for elbowing flanker Liam Messam in the throat, which resulted in a red card.

Gerrie Swart appeared at the hearing – which was originally scheduled for Tuesday – on behalf of Du Plessis, via teleconference.

"Submissions were made on behalf of the player and the video footage was reviewed," Sanzar said. – Sapa