Malema and the DA: Marikana politicking ahead of 2014 elections? 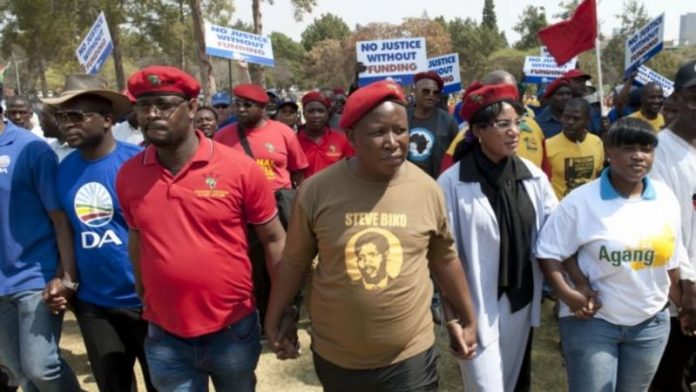 Have the Marikana miners been reduced to an electioneering tool?

A civilian-organised march campaigning for legal funding on Thursday turned into a political affair featuring a riot of colours. The blue shirts of the Democratic Alliance (DA) competed with the red berets of the Economic Freedom Fighters (EFF) and the yellow regalia of the Congress of the People (Cope) as one opposition leader after another took to the stage.

Citizens4Marikana, a loose group of concerned individuals who came together a few days before the first commemoration of the August 16 massacre to campaign for legal financing for miners wounded and arrested after the watershed shootings, initiated the march. The miners are currently unrepresented in hearings at the Farlam commission of inquiry into the shooting.

But the group’s cause rapidly proved to be popular with political parties.

With national elections just months away, the question of political opportunism lingered.

"I would have expected to see Citizens4Marikana T-shirts and banners, not individuals grandstanding in their respective political party regalia," wrote blogger Tendai Joe. "There is a thin line between political opportunism and real solidarity with the poor."

The EFF spoke openly about political opportunism at the march. "We can see those who are very opportunistic using this moment to gain and seek election votes, but what we are saying is that if they are pushing the same policies as the African National Congress government … well then we’re quite clear they are here for political gains," said a party representative.

Malema's impact
But the EFF has used the Marikana shootings and related issues as a springboard since before the party’s inception, and is now making it a core part of their campaign.

"In publicity terms … it is Julius Malema who has had more impact," wrote the Forum for Public Dialogue’s Terry Bell before the one-year anniversary of the shootings. "Malema and his newly launched Economic Freedom Fighters hope to win electoral support on the platinum belt."

Citizens4Marikana has been accommodating of the various groups that have latched on to their cause.

"It is not possible to prevent politicians from politicking," spokesperson Erik de Ridder said. "In a democratic society, the voice of political leaders is an important factor that helps outline the shape of things to come or the shape of things as they are."

He added: "Citizens4Marikana is pleased to see powerful groups, whoever they may be, whether they are the DA, Cosatu or the EFF or the SACC [South African Council of Churches] – all of which have punted the campaign through their own platforms – throw their weight behind the cause of truth, justice and fairness."

The political activity around the Marikana incident is nothing new. The Mail & Guardian’s Kwanele Sosibo, reflecting on his long-running coverage in the area, wrote about a "confluence of agendas" around the incident. "The clergy, Julius Malema and the fractured left – all seeking a reinvigorating cause – descended on the town like famished vultures on to a corpse."

The EFF’s Mbuyiseni Ndlozi was scathing of the charge of political opportunism, while acknowledging how important Marikana was to the radical party’s cause.

The EFF had aimed to launch the party in Marikana around the one-year anniversary of the shootings. But its plans were scuppered when a complaint to the Independent Electoral Commission held up its registration process as a political party.

But with that hiccup over, the party still intends to launch at the loaded site on October 13.

EFF pillars
​Ndlozi said the EFF chose the site because it resonated with two of their most important policy pillars: land expropriation and the nationalisation of mines. "We want to associate ourselves with the memory of the community of Marikana because of the major policies we want to implement," he told the M&G on Monday.

"Marikana served as an important symbol for the failure of the 1994 social pact, which has fallen apart."

The plan's success depends on whether or not the EFF can prove a credible commitment to the Marikana miners beyond pre-election campaigning.

Police shot dead 34 people, almost all of them striking mineworkers, while trying to disperse a group gathered on a hill near the mine on August 16 2012. Ten people, including two police officers and two security guards, died in the preceding week.

The protracted Farlam inquiry has seen costs run into tens of millions of rands, and the state and mining firm Lonmin appear to have deep enough pockets to continue paying top-notch lawyers. But the miners' lawyers, in the form of Dali Mpofu's team, have run out of funds and explored nearly every avenue – from applying to Legal Aid South Africa to requesting the High and Constitutional Courts to compel the government to foot the bill – with no success.

The commission is continuing without representation for the injured and arrested mineworkers. Representatives of the families of the deceased and the Association of Mineworkers and Construction Union have withdrawn in solidarity. Any witness called to testify at present is done on the basis of a detailed written statement and short oral evidence.

Miners passed around a bucket at a Rustenburg ceremony marking the anniversary of the Marikana massacre for contributions towards their legal fees, according to Mpofu. The money was mostly in coins and came to R17 201.