Will physicists ever be bang on? 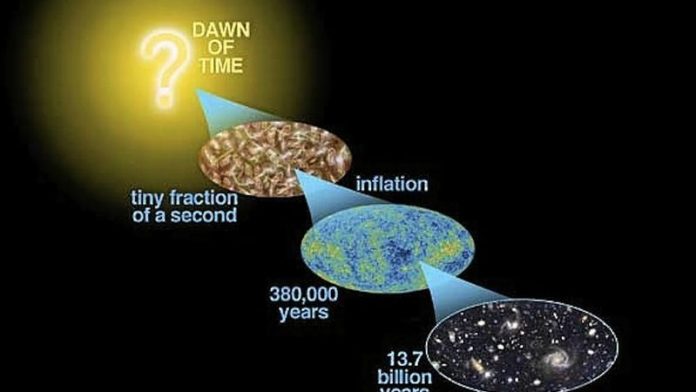 There was a bang, we think. About 14-billion years ago, a tiny singularity – a point smaller than a pinhead, containing all the matter in our universe – exploded. We're pretty sure. If we accept that the universe started with a bang – an "if" that is infinite and expanding at about 70km per second per megaparsec as you read this – we still don't know what exploded, what happened in the seconds before it did and where all of that energy came from.

What was the Big Bang, and can we believe that it happened?

Although the Big Bang remains a theory, the evidence is mounting that this cataclysmic explosion did occur in our universe and that matter is accelerating away from the scene of the crime.

The main feathers in this inflationary universe theory's cap are the cosmic background radiation, which permeates the universe and has been measured – this left-over radiation from the Big Bang is weaker than a microwave's and raises the temperature of the universe by about three degrees – and empirical proof in 1998 that the universe wasn't just expanding, it was accelerating.

But there is still a big question that perplexes scientists and philosophers. To be fair, there are many questions that remain, but this particular question – what was this singularity, and where did the massive amount of energy come from – is a major source of vexation because we can't "see" what happened at the moment of the Big Bang, this point at which time did not exist, and everything we think we know was contained in a tiny, incredibly dense knot.

There are theories. And here are some of the ideas about what happened in that moment before everything exploded.

On the one hand are some Christians who – holding to a literal interpretation of the Bible – believe that God created the world in seven days about 10 000 years ago. The Qur'an also says that creation took place over a matter of days, and many Muslims read this literally.

However, on the other end of the spectrum is the belief that God is responsible for that initial burst of energy that galvanised the Big Bang. One of the main arguments for this is the Law of Conservation of Energy, which states: "Energy can be neither created nor destroyed, only transferred from one state to another."

So where did the Big Bang energy come from?

A supernatural source, they argue.

One interpretation of this is intelligent design: that the universe was created by an intelligent entity, with agency. Intelligent design is seen as a way to reconcile science with religion, and an omniscient, omnipotent God with the chaotic swirl of universe expansion.

But many scientists reject the concept of supernatural causes in favour of empirical natural science. Also, not all proponents of intelligent design are religious. Many are secular, and some say that these intelligent designers could be aliens.

According to the multiverse theory, our universe is one of many, an argument allegedly supported by convoluted equations. I say allegedly because these equations are the dominion of the few who can read these highfalutin symbols that explain the world.

Our universe is like a page in a book, a thin membrane (aka a "brane"), one page among many. But in the same way that words on one page cannot slide on to another, so each universe is self-contained and distinct from the other. But if these "branes" do touch, they spark and ignite a new universe, a new "brane". The brane theory argues that this is where the energy for the Big Bang came from.

We are pretty sure that black holes exist: massive stars that have collapsed in on themselves, creating a mass whose gravity is so strong that it sucks surrounding matter and light into it. It is called a "black" hole because not even light can escape from it, and – although it cannot be observed directly – its existence is inferred by the effect it has on surrounding matter and radiation. But where does all this energy go?

But maybe the Big Bang singularity already contained the carcass of this universe and with it the detritus of millions of civilisations that lived and advanced and died, and we are caught in a Sisyphus-esque cycle.

At the moment, the universe is expanding, but perhaps at some point in the future it will begin contracting. The aforementioned cipher of mathematicians allegedly also predicts that this is possible.

This would hold with the Law of Conservation of Energy – no energy was created, and like a Russian matryoshka doll, the singularity already contained the energy that would explode to become our universe. And after the infinite atoms have returned like homing pigeons to a tiny, incredibly hot, inconceivably dense singularity, they will explode outwards all over again.

Where to from here?

Most of the large scientific experiments in the world – from those looking at the circuits of the stars to those divining how bosons behave – are trying to answer this perplexing question.

The Square Kilometre Array, which will be the largest radio telescope in the world, will be able to detect radiation from the Big Bang, and perhaps tell us how galaxies are formed, among many other things. At the Large Hadron Collider, which is a 27km particle accelerator, scientists are smashing particles together at massive speeds to see whether these can force minuscule atom debris on to another dimension.

But perhaps the most insightful theory of the origins of the universe comes from Douglas Adams's Hitchhiker's Guide to the Galaxy: "There is a theory which states that if ever anybody discovers exactly what the universe is for and why it is here, it will instantly disappear and be replaced by something even more bizarre and inexplicable.

"There is another theory which states that this has already happened."

Many people have never heard of the Technology Innovation Agency (TIA); they see it as another acronym in a science system (and government) beset with lettered shorthand.

But the TIA is a pivotal – and expensive – hinge in South Africa’s innovation system, and has been beleaguered by criticism since its launch in 2009.

In South Africa, you often hear the lament that there are many innovative ideas but few patents; many academics doing applied research but little of this being transformed into prototypes; and many entrepreneurs who can’t get the technical support to get their ideas off the ground.

This is what the TIA – established by the Department of Science and Technology and which received R482-million this financial year – is meant to do.

To be fair, it was always going to be a rough ride: the agency was a merger of seven existing entities, each its own little fiefdom. Many of the former heads of these organisations were incorporated into the TIA’s board, which was headed by Agang leader Mamphela Ramphele.

A review of the TIA, which was completed this year, mentions jostling for influence within the agency, a “toxic” relationship between the executives and the line department and confusion about its mandate.

Now the TIA is in the middle of a forensic audit following allegations of a corporate governance breakdown and irregular procurement of services and investment processes. The agency’s chief executive, Simphiwe Duma, is on special leave.

Last week, Ramphele called a briefing of “selected journalists”, denying that she benefited financially from a TIA project that was located in her home village in Limpopo.

Why should you care? The TIA is necessary to get products to market, fulfilling the need to improve economic competitiveness and job creation, and taxpayers are spending an exorbitant sum every year on it.

And what is interesting is how high-profile people behave when they think no one is watching, in an entity that many don’t know about.