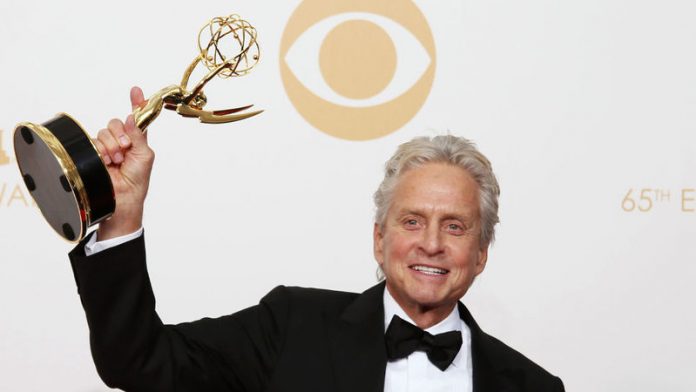 They are brilliantly played by a reptilian Michael Douglas and monumentally buff Matt Damon. Their love emerges from this film as one of the most tempestuous affairs in showbusiness history, reeking with anxiety, unhappiness, passion and denial – probably topped only by the relationship between Elton John and Watford Football Club in the 1980s.

The movie takes us from the couple's ecstatic first meeting backstage in Las Vegas in 1976, right through to Scott having to be ejected, with zero dignity, from his kept-man apartment some years later. Since this premiered last month at the Cannes film festival, it has dawned on us all that Thorson himself may not have been exactly on oath with every detail in his 1988 autobiography, Behind the Candelabra: My Life With Liberace, on which the film is based. This applies especially to his jaw-dropping assertion that the cosmetic surgery he underwent was forced on him by his famous lover, specifically to make him look like a younger Liberace.

There is no independent corroboration for this claim, but its unreliability only adds to the story's fascination: a bizarre, anti-Pinocchio parable in which the power of loneliness and toxic love transforms a handsome young guy into a deeply unhappy, plump-nosed, cleft-chin latex doll.

Douglas is hilarious, a primped and toupéed peacock of the ivories with a quavering, querulous voice that combines conventional impersonation with hints of Truman Capote and Katherine Hepburn. Liberace's technical genius at the keyboard means he does not need to rehearse, and his excess energy and artistry are channelled into chasing after young men. He demonstrates a casual, awe-inspiring ability to thump out a boogie-woogie left-hand at an impossibly fast 16 beats to the bar, and perhaps it inspires some of Soderbergh's own movie-making energy and exactitude.

Matt Damon sports a classic disco centre-parting and cheesecloth shirt as the pert Scott, an animal trainer who initially wins Liberace's heart by offering to treat his blind poodle, Baby Boy; Liberace murmurs this same endearment to Scott when they are in bed. Dan Aykroyd plays Liberace's glowering manager, Seymour, and Debbie Reynolds the only woman in Liberace's life  – his elderly mother, Frances.

Scott is first taken by a boyfriend to see Liberace at the Las Vegas show. Soon Liberace and Scott embark on a career of co-dependency on an operatic scale. Behind the Candelabra starts off super-camp and hyper-kitsch, and long after the storm of parting it ends up gently sentimental and celebratory. In between, the movie is eerily affectless and airless: the couple rarely go outside; they socialise with other celebs. We are locked in their bizarre private world, a preposterously over-furnished palace-cum-prison where they float in their own neuroses and dependencies. The fat gold rings he wears around almost every finger form an interesting currency in Liberace's dysfunctional world: he challenges the audience to admit he can play brilliantly despite this chunky jewellery; he loves giving rings to his conquests, who they hang on to them as a form of capital.

And that title: "behind" the candelabra? The candelabra conceals nothing, in the literal sense – unlike Liberace's wig. The great man doesn't have secrets from us, the audience. The comic grammar of the movie resides in the obviousness of everything we see him getting away with. Were the American public, as Scott's friend claimed, really unaware of Liberace's true nature? To the press, Liberace denies being gay; he prides himself on a 1956 libel claim against the British newspaper that called him a "mincing ice-covered heap of mother love". That famous victory enforced wary caution on papers on both sides of the Atlantic, and was in fact the foundation of the polite media doublethink about Liberace that persisted until the end of his life.

Scott challenges him on the issue of being discreet, not hypocritical. But who are the hypocrites anyway? The heterosexuals of showbusiness loved excess and kitsch and bad taste, too. They also loved abusive relationships, vanity and cosmetic surgery, and rich older straights loved to be "sugar daddies". As biopic, black comedy and portrait of celebrity loneliness, Behind the Candelabra really is hard to beat.  – © Guardian News & Media 2013

Moving encounters with misfits and megastars