Morgues in Nairobi prepare for an influx of bodies 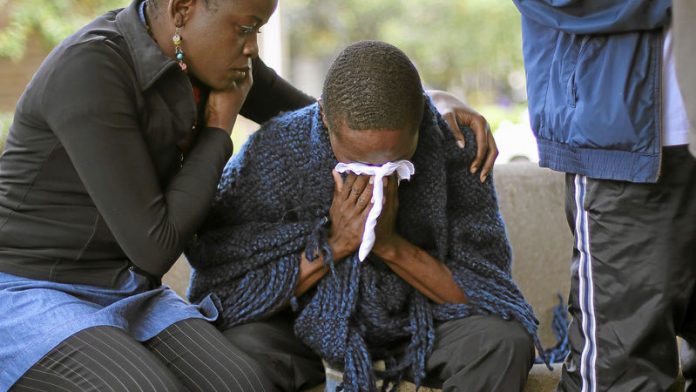 Gruesome details continue to emerge from the aftermath of the four-day terrorist siege.

One morgue in Nairobi said it was preparing for up to 160 more corpses, and an intelligence source told the Guardian there was evidence that the number of bodies buried under rubble could be in the hundreds, adding that at least one attacker was still engaged in conflict with security forces inside the mall – five days after the shopping centre was stormed on Saturday.

"One attacker is still alive," said the source, who is involved in the rescue operation inside Westgate, and who asked not to be named.

Read more:
Terror in Kenya: The 'White Widow' and the SA link
Kenyatta urges unity after attacks
Somalians fearful of reprisal in SA

"There were 200 workers in Nakumatt [supermarket] and about 800 people shopping. The walls of Nakumatt collapsed. There are a lot of bodies inside."

Al-Shabab, the Somali-based, al-Qaeda-linked group behind the attack, claimed the government had carried out a "demolition" of the building, burying 137 hostages.

On Thursday, the Kenyan government rejected claims that any militants remained alive, or that they had demolished part of the building, but said the mall's upper-level car park had collapsed, bringing the second level down on to the ground floor on top of at least eight civilians and one or more attackers.

Government spokesperson Manoah Esipisu said the number of dead – which was reported at 67 – already included the bodies of those buried beneath the rubble, and denied the figure would rise further.

Kenya's Interior Minister Joseph Ole Lenku said the process of determining the number of dead and gathering evidence from the mall could take another week. He said the United States, Israel, Britain, Germany, Canada and Interpol were helping with the investigation.

"This morning [Thursday], forensic experts began sifting through the rubble at the Westgate mall," Lenku said at a press conference close to the centre. "This process involves finger-printing, DNA and ballistics examination. We do not expect the numbers of the dead to increase in any significant way. Yes, there could still be bodies trapped in the rubble. We can only confirm that after we have gone through the rubble."

The US ambassador to Kenya, Robert Godec, said US experts were providing technical support and equipment to Kenyan security forces and paramedics.

As questions remained about whether any of the attackers were from the United Kingdom, the British high commissioner in Kenya, Christian Turner, confirmed that a Briton had been arrested, but said: "We do not believe that the individual was of central interest to this operation."

The statement came after intense speculation as to the role of foreign al-Shabab recruits in carrying out the attack, following reports that a British woman and two or three Americans may have been involved.

Neither country has ruled out the claims, but the US attorney general, said there had been no verification that Americans were involved.

"Most of the jihadis are diaspora Somalis who have been living in the West," said a Kenyan intelligence source, who did not want to be named. "We know this was an operation by a faction of al-Shabab, with Somalis, probably working with al-Qaeda."

More details were beginning to emerge about the attack itself. One military expert told the Guardian he had information that al-Shabab had set up inside the mall, where they stockpiled weapons and ammunition in preparation for the siege.

"This is a terrorist cell that has been operating in Kenya for a while," said Colonel Benjamin Muema, a security expert in Nairobi. "It is a cell that knows the mall, had a blueprint of the building, and was a step ahead of the security forces.

"I believe that this group has had premises within the mall, and that explains how they were able to continue for four days without running out of grenades and explosives."

The government did not rule out that a female attacker was involved. "Regarding the identity of the terrorists, we want to request the public and the international community to allow our experts to undertake the forensics," said Lenku.

Al-Shabab also made claims about the way the attack was carried out, stating in an email exchange with Associated Press that foreigners were a "legitimate target" and that Muslims had been spared.

Late on Wednesday night, al-Shabab's leader for the first time confirmed claims by his group's members that it was behind the attack on the mall, Reuters reported.

In an audio clip posted on the al-Shabab-linked website, Ahmed Godane said the attack was in retaliation for Kenya's incursion in October 2011 into southern Somalia to crush the insurgents.

"Take your troops out or prepare for a long-lasting war, blood, destruction and evacuation," Godane said in the message delivered in the Somali language and apparently directed at Kenya. Kenyan troops are fighting alongside African peacekeepers against militants in Somalia. Al-Shabab had threatened revenge since Kenyan troops joined the conflict.

"You are part of the massacre Kenya carried out in Kismayu and in other towns because you had elected your politicians. The tax you pay is used to arm Uhuru [Kenyatta] forces that massacre Muslims. You had supported the fight against us," Godane said. – © Guardian News & Media 2013