Amplats should not concede to Amcu demands, says analyst 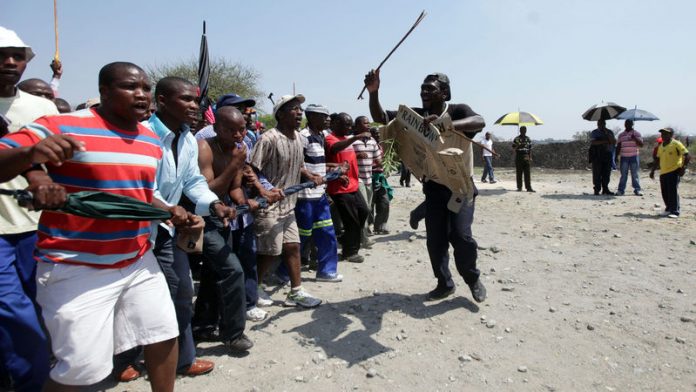 Anglo American Platinum, the largest producer of the metal, will do better to see out the strike at its mines than by giving in on planned job cuts, said Coronation Asset Management.

Mines run by the Johannesburg-based company known as Amplats have been halted since September 27 because of a strike called by the Association of Mineworkers and Construction Union (Amcu) over proposals to cut 3 300 jobs.

The union, the largest at Anglo American Platinum, is challenging a decision by the company to consolidate five mines into three at its Rustenburg complex. The sites are losing more than R1-billion every six months, chief executive Chris Griffith said on August 30. Plans to cut as many as 14 000 jobs, announced in January, were scaled back following pressure by unions and the government.

"It is better in the long-term interest of the business to take a strike to establish a realistic wage base and to put the company in a profitable position," Neill Young, an analyst at Cape Town-based Coronation, said on Tuesday.

The strike is continuing and Anglo American Platinum remains in talks with the Amcu union, Mpumi Sithole, a company spokesperson, said. A spokesperson for Amcu wasn’t available to comment.

Implement job cuts
Amplats has no choice other than to implement the job cuts, according to RBC Capital Markets LLC analyst Des Kilalea.

"This is a business that in its current structure doesn’t work," Kilalea said by phone from London. "They're going to lose money either way."

The Johannesburg Labour Court on Tuesday reserved judgment in a case brought by the National Union of Mineworkers (NUM) in a separate bid to halt the job cuts, union spokesperson Lesiba Seshoka said. The NUM was unseated by Amcu as Anglo American Platinum’s biggest recognised union in March.

Less than 20% of workers reported for duty at the company’s operations in the North West province on the first day of the strike, the company said on Friday. Operations at its processing division were not interrupted, the company said. – Bloomberg