On the trail of al-Shabab’s Kenyan recruitment ‘pipeline’ 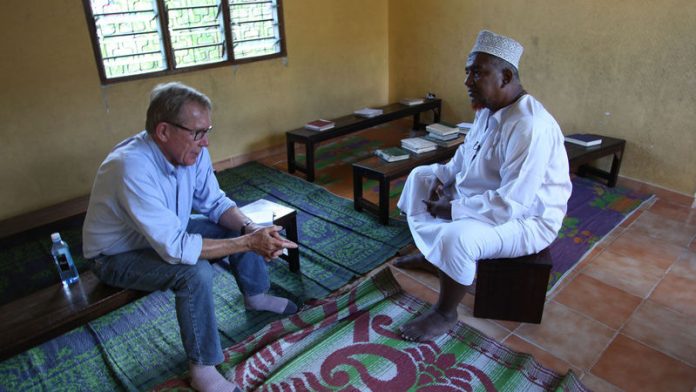 The armed siege at Westgate shopping mall in Nairobi has focused attention on the extremist group, al-Shabab. When the attack happened, the BBC's Panorama programme had been investigating the recruitment pipeline of young Muslims through Kenya to join the group in Somalia.

I meet Makaburi in a room not much bigger than a cupboard, in Mombasa, eastern Kenya.

It is not a place you would expect to meet a radical cleric who describes himself as Kenya's number one target in the country's fight to disrupt al-Shabab's recruitment network.

Makaburi, whose real name is Abubaker Shariff Ahmed, was placed on a UN Security Council list which banned him from travel outside Kenya and froze his assets in 2012.

The indictment describes him as "a leading facilitator and recruiter of young Kenyan Muslims for violent militant activity in Somalia", who has preached that "young men should travel to Somalia, commit extremist acts, fight for al-Qaeda, and kill US citizens".

Makaburi makes no apology for his activities and believes they are justified according to his own controversial interpretation of verses in the Qu'ran.

'Islam is Islam'
"There's no such thing as a moderate muslim. The prophets did not teach us moderation in Islam – Islam is Islam," he said.

"Being a moderate muslim is accepting what your enemies want you to be."

Although Makaburi is guarded in his movements – as he fears assassination – he is not in hiding.

I met him quite openly at his home and travelled with him to a village where he prayed publicly in a mosque.

Makaburi said accusations that he directly funds al-Shabab are false – but defended its right to use violence.

"Al-Shabab are using violence to stop their country from being invaded by people from outside," he said.

"It's not the right of America or any other country to interfere in what they believe in or how they want to run the country."

Police hit squad
He took me to an Islamic boarding school just outside Mombasa where young Muslims, roughly between the ages of six and 10, some of whom are orphans, learn to memorise the Qu'ran by heart.

He proudly pointed out that his young son is one of its students.

The school was established by Sheikh Aboud Rogo Mohammed, who was described by the UN as a "close associate" of Makaburi. Sheikh Rogo was assassinated in Mombasa in August 2012. His supporters have no doubt that he was targeted by a police hit squad but there has never been any evidence to prove it.

I followed the trail from Mombasa via Lamu in the north and on to the remote islands off its shores from which the Somali border is only a couple of hours away by boat.

I discovered that would-be jihadis, whatever their national origin, do not chance upon the route for themselves, but are actively guided along it by radical preachers such as Makaburi.

They are told which islands they should head for, where they should stay, and who they should contact to transport them on boats from isolated outposts like Pate Island to their ultimate destination, Somalia.

I interviewed two young Kenyan al-Shabab recruits who had travelled through a network such as this one to join al-Shabab in Somalia. They did not wish to be called by their real names.

They had been promised money for their families back home and a place in paradise as a reward for their commitment.

Forced to watch a beheading
When they arrived in Somalia, their dreams of jihad and glory were shattered.

Ali said he was 13 or 14 when he travelled to Somalia. He described being forced to watch the beheading of a recruit who had tried to escape from the al-Shabab camp in Kismayo.

"His hands and legs were tied behind his back. They made him kneel down and then they took a very sharp knife, right in front of me, and slaughtered him.

"He was screaming, like an animal, the way a goat can be slaughtered."

It was a shocking warning to others who might contemplate running away.

Ali was traumatised by what he saw and still has nightmares about the horror he witnessed.

Despite all the risks involved, he managed to escape and make it back to Nairobi. He now lives away from his family because he fears he would be killed if he were identified as an al-Shabab deserter.

Khalid said it was Sheikh Rogo who encouraged him to travel to Somalia and become a jihadi.

"He used to tell us: 'Instead of sitting in the slum doing nothing, it's better to go to Somalia and fight for your religion, you'll go straight to heaven.'"

Khalid was also shocked by what he experienced in Somalia. He said he knew of children as young as six and seven having been used as suicide bombers by al-Shabab.

Many of the young Kenyans who travel to Somalia are still at school. Often, the authorities only learn about their decision to join al-Shabab when mothers report them as missing.

The Kenyan navy and other agencies – with support from their UK, US and European partners – have had some success in disrupting the pipeline of recruits.

In September 2012, Kenyan armed forces successfully attacked Kismayo, al-Shabab's main port and logistical base in south Somalia, and an important source of income for the group.

As a result, the notorious activities of Somali pirates have also been curtailed. The commander of the Kenyan raid on Kismayo told me that the pirates use ransom money to pay al-Shabab for a license to operate. He also suggested that some of the personnel may be interchangeable.

Preserve the pipeline
The key question is how these radical clerics are able to operate openly without being prosecuted.

In September 2012, Makaburi was charged with several counts of incitement for his part in the riots following Sheikh Rogo's assassination. He is currently on bail pending a trial.

The Kenyan authorities I spoke to said Makaburi and other radical clerics operate to the very limit of what the law allows and gathering the evidence to convict them is extremely difficult. The United Kingdom faces the same problem.

Their fear is that failure to stop radical clerics such as Makaburi will preserve the pipeline of young Muslims being recruited to al-Shabab.