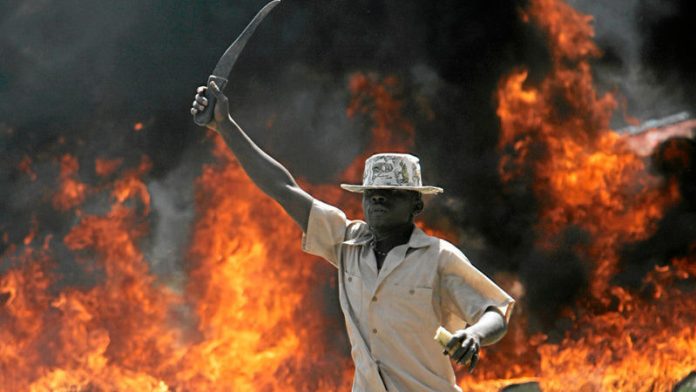 As evening fell on December 31 2007, the mood on the streets of Nairobi was tense. The post-election violence had only just started, and Jane had gone home to the relative sanctuary of her compound in a Nairobi slum. As she was waiting for a security guard to unlock the gate, she was approached by three police officers. For no apparent reason, one of them drew his gun and shot her in the leg.

While she lay on the ground bleeding, she watched the police officer and his two colleagues stroll away.

Jane was shot at the outbreak of the post-election violence that rocked Kenya following a disputed presidential election result in December 2007.

In the chaos that followed, politically motivated and ethnic killing by armed gangs and the police claimed the lives of more than 1 000 people and forced half a million to leave their homes.

Jane survived the incident, but is now crippled. Six years on, she and the other victims of the violence have yet to see anyone held to account for what happened in those dreadful months.

It is the stories of people like Jane that we ask the leaders gathering at the African Union next week to keep at the forefront of their minds when they consider mass withdrawal from the International Criminal Court (ICC).

Critical juncture
The outcome of the extraordinary summit due to be held in Addis Ababa on October 10 and 11 represents a critical juncture in the fight against impunity globally.

The 34 AU members that have ratified the Rome Statute, which established an independent permanent ICC must take a strong stand to protect the international justice mechanism they have committed to.

The ICC is the only permanent criminal court in the world that has the authority to act when national courts are unwilling or unable to prosecute.

An African Union mass withdrawal would be disastrous for civilians in Africa who, like Jane, bear the brunt of human-rights violations and abuses.

African states played a vital role in setting up the ICC and have an unquestionable stake producing a just, fair and effective court.

It is troubling that, in recent years, some have sought to undermine its work with politically motivated claims that it is unfairly targeting Africans.

It was largely thanks to the lobbying role played by African states that efforts to undercut the independence of the court's prosecutor were rejected by ensuring that the United Nations Security Council could not control the court's work.

Actively supported
?African states, including Botswana, Cote d'Ivoire, Guinea, Lesotho, Liberia, South Africa, Nigeria, Senegal, Sierra Leone and South Africa, also helped to bring about the early establishment of the ICC in July 2002 by promptly ratifying the statute. Since then, they have actively supported the ICC and nominated Africans to the position of ICC judges, including current ICC prosecutor Fatou Bensouda from Gambia.

It is understandable that concern has emerged among many African governments that, in practice, the ICC has yet to investigate genocide, crimes against humanity and war crimes outside of Africa.

Indeed, Amnesty International shares this concern. The office of the prosecutor must be more transparent when going about its work. This is especially so in determining whether or not to open new investigations in situations that have been under preliminary examination for a number of years, such as Afghanistan and Colombia.

The office of the prosecutor should also review its decision to close the preliminary examination of Gaza following Palestine's recognition as a nonmember observer state of the United Nations last November.

For many months, Amnesty International has been calling for the UN Security Council to refer the situation in Syria to the ICC prosecutor.

But the fact that the ICC's investigation and cases are all currently focused on eight African situations does not mean that the ICC prosecutor's decisions are without basis or biased.

The ICC can and should play an important role in delivering justice, and reparation, to African victims in these situations.

As an organisation working on behalf of, or alongside, victims of international crimes all over the world, every day we see the importance of ensuring access to justice for the world's most vulnerable people.

Any withdrawal from the ICC would send the wrong signal about Africa's commitment to protect and promote human rights and reject impunity, all of which are values central to the Act upon which the AU itself was founded.