The hunt for Red October’s point 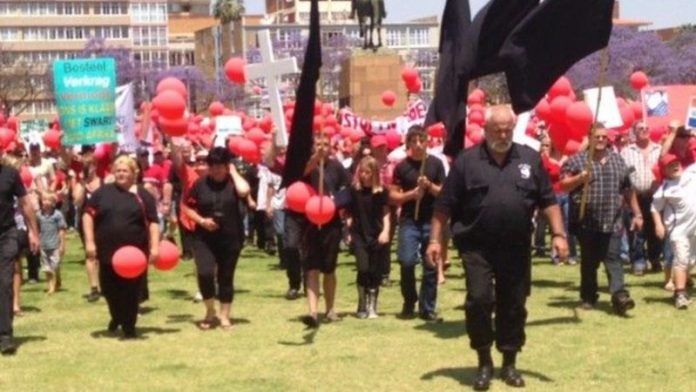 Red October. No, it's not a campaign by the South African Communist Party or even an epic tribute to Tom Clancy's famous novel.

Rather, it's an international campaign by a handful of Afrikaans celebrities and a slightly larger group of conservative and right-wing groups who are bent on the idea that white people – and apparently white people alone – are being murdered and marginalised in South Africa on a massive scale – possibly with some underlying organisation or programme.

This is despite an exhaustive investigation into the oft-quoted issue of "white genocide" by Africa Check that found white people are less likely to be murdered than any other race group in South Africa.

No matter, the campaign wants to fill the skies with red balloons under banners that appropriate a famous communist slogan.

On Thursday October 10, Afrikaans celebrity singers Steve Hofmeyr and Sunette Bridges led a march on the Union Buildings in Pretoria. In Cape Town, on the same day, there was a planned march on the offices of Naspers, the publisher of newspapers such as Beeld and Rapport (which are considered traitorous rags by much of the right wing). In East London, there was to be a gathering at the Heavenly Pancake House, and in Louis Trichardt, the assembly point was a rugby lapa. There were even events planned in Australia, New Zealand and in Chicago at the Trump Tower – wherever the South African white right wing has gathered outside our borders.

At all these events, the intent is to release masses of red balloons (biodegradable ones, in the case of Cape Town) and to protest ­everything these rightists claim has gone wrong under black rule. Protesters carried signs printed against the colours of the old South African flag.

The campaign was very well-organised, with a comprehensive website carrying inspiring slogans and images.

"Our lives begin to end the day we become silent about the things that matter," begins one paragraph, which ends with the famous quote: "All that is necessary for evil to triumph is for good men to do nothing" albeit unattributed.

Academic Nicky Falkof has pointed out that the language and imagery on the site are an appropriation of the language of liberation and struggle.

"According to Red October, white South Africans are an 'Ethnic Minority' who are experiencing 'inhumane Slaughter and Oppression' [yes, the caps are in the original]. In phrasing that could be lifted directly from the liberation years, the 'people of South Africa' will 'no longer be silent'. 'Other minority groups' [one wonders which ones] will join 'in a show of solidarity' against the government’s failure to enforce our 'rights' and provide all citizens with a 'free, fair and safe country'. Not only that, but they've exhumed poor Edmund Burke's aphorism about evil flourishing while good men do nothing, a somewhat ironic choice for a demographic that spent the worst years of the struggle braaiing by its pools and inspecting its maids for signs of communism."

Hofmeyr responded to Falkof's piece on Twitter in a nonsensical jibe that managed to be both sexist and uninformed.

October 10 was a holiday in the old South Africa, called Kruger Day or Heroes' Day, and was celebrated from 1882 to 1899 and again from 1952 to 1993. It celebrated Paul Kruger’s birthday and the breakaway from British rule.

The present-day campaign has been met with little sympathy however, as many white South Africans distanced themselves from the erroneous assumptions of the movement and along with others on social media handled the issue with humour.

Some tweets referenced a campaign promoted by 5fm DJ Gareth Cliff to stay sober in the month of October:

Some Afrikaners are only 10 days into Ocsober and already started to feel oppressed. #Ocsober #RedOctober

Meanwhile others wondered what the point of the day was:

I missed it. Is Red October a thing where we all march to get sunburnt 'cause white is such an embarrassing race?

It's about time gingers got their own month. #redoctober #howtoconfuseracists

So what's this Red October thing? Is it an unlikely mass mobilisation by the SACP?

Meanwhile others relied on good old sarcasm to make their point:

It's #RedOctober Day! What are *you* doing today to defend whiteness and only whiteness?

Others were more to the point:

#RedOctober is a classic example of what happens when News24 commentors get together at one too many braais.