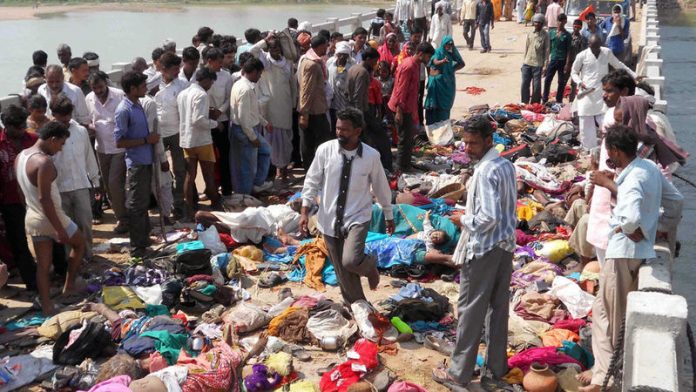 The death toll from a stampede on a bridge in India rose to 109 on Monday after the bodies of more Hindu pilgrims were recovered from the river below, police said.

"The latest information we have from the ground is that 109 people killed and 133 were injured," Anand Mishra, an officer in the local police control room, said in an updated bulletin on Sunday's tragedy.

While scores of victims were crushed to death on the bridge in the town of Ratangarh, others died as they leapt into the Sindh River below in a bid to escape the chaos.

"We recovered the bodies from the river and from where they were crushed to the death," said Mishra, speaking by phone from the nearby city of Datia in the state of Madhya Pradesh.

The tragedy occurred at the same site of another stampede in 2006, in which more than 50 pilgrims were also killed.

Meanwhile, hours after Sunday's collapse, relatives were searching for loved ones among the bodies grouped on the concrete, two-lane bridge over the river in the Chambal region of Madhya Pradesh state.

More than 100 people were being treated in a hospital for injuries including broken bones.

'Shock and deep anguish'
​Police wielding sticks charged the crowd to contain the rush and people retaliated by throwing stones at the officers, DK Arya, deputy inspector general of police, told the Press Trust of India. One officer was badly injured.

Among the people killed by the crush were 17 children, he said.

It was not immediately clear how many people were on the bridge when the stampede started. Local media said about 500 000 people had gone to the remote Ratangarh village temple to honour the Hindu mother goddess Durga on the last day of the popular 10-day Navratri festival.

The state has ordered a judicial inquiry.

Sonia Gandhi, the leader of India's ruling Congress Party, expressed "shock and deep anguish over the tragic incident", according to a party statement. – AFP