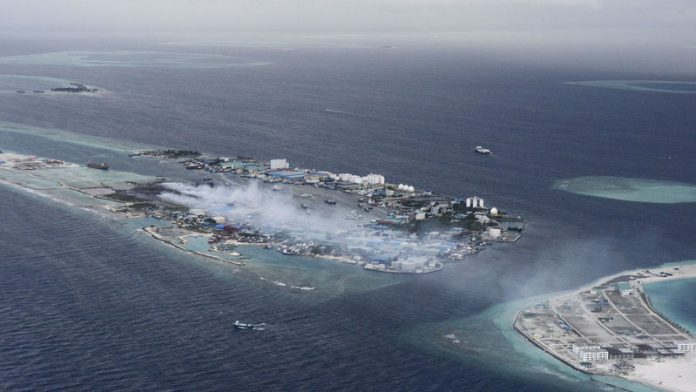 Descending by plane into the Maldives offers a panoramic view of azure seas and coral-fringed islands, but as the tarmac nears, billowing smoke in the middle distance reveals an environmental calamity.

Thilafushi Island, a half-hour boat trip from the capital, is surrounded by the same crystal clear waters and white sand that have made the Indian Ocean archipelago a honeymoon destination for the rich and famous.

But no holidaymaker sets foot here and none could imagine from their plane seats that the rising smoke is the waste from residents and previous visitors being set alight by men like 40-year-old Fusin.

A migrant from Bangladesh, he is one of several dozen employees on "Rubbish Island" — the biggest waste dump in the country where he's paid $350 a month for 12-hour shifts, seven days a week.

With no safety equipment bar a pair of steel-capped boots, he clambers over a stinking mountain of garbage, eyes streaming and voice choked after four years' exposure to thick, toxic fumes.

Beneath his feet lie the discards of the cramped capital Male and the local tourism industry that has helped turn the collection of more than 1 000 islands into the wealthiest country in South Asia.

A discarded plastic diving mask lies in a heap of packets of juice, plastic bags and rotting vegetables that awaits Fusin's attention.

"Before we used to separate cardboard and glass, but now the company is not so strong," says site manager Islam Uddin, a friendly man who has worked here for 16 years.

He complains of neglect from successive governments and laments that a privatisation deal signed in 2008 with a German-Indian waste management company has stalled as a result of local political upheaval.

Only plastic bottles, engine oil, metals and paper are collected, with the waste sent by boat to India, forming the biggest export from the Maldives to its giant neighbour to the north-east.

All of the rest, including electronics that escape the attention of hundreds of human scavengers and batteries, go up in flames — with no sign of the high-tech incinerators promised as part of the privatisation deal.

"The batteries contain lead. There are products with mercury in them. All of these can easily get into the food chain," says Ali Rilwan, an environmentalist with local organisation Bluepeace Maldives.

"Unlike landfill, this is the ocean they are filling."

As he speaks, waves lap at the edge of the dump which has been expanding steadily into the sea since 1993 and upwards — forming one of the highest points in the whole country, 80% of which is less than a metre above sea level.

He cites government figures showing visitors to the Maldives created on average 7.2kg of waste per day, compared with 2.8kgs for residents of Male, which make up a third of the 350 000-strong population.

Tourists, at nearly a million last year, outnumber locals by a ratio of about three-to-one.

Local authorities plan to stop the toxic open burning on the island and the private operator of the site, finally set to start work after a five-year delay, will build an incinerator.

Better waste management in the capital Male through door-to-door collection and recycling will also help to reduce environmental damage, says a city councillor from the capital, Ahmed Kareem.

"The project that is going ahead will monitor air pollution and also the sea pollution near Thilafushi Island and so no further expansion by waste will be done for Thilafushi," Kareem told Agence France-Presse.

The Maldives Association of Tourism Industry declined repeated interview requests from AFP seeking comment on efforts of resorts to reduce their environmental impact.

Site manager Islam is hopeful he will get new machinery allowing them to move waste more easily and sort it. Rows of broken diggers and bulldozers sit nearby in a vehicle graveyard.

Behind him stands a row of palm trees discarded by a hotel resort which were planted in an incongruous attempt to beautify a place of toxic smoke clouds and buzzing swarms of flies.

The trunks are blackened and the leaves are missing.