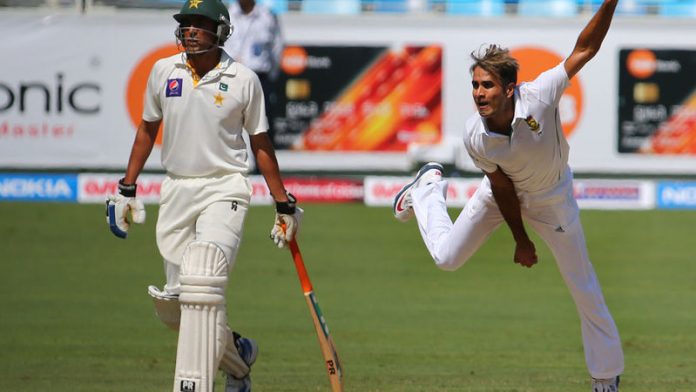 Leg-spinner Imran Tahir took a career-best five-wicket haul to give South Africa an early advantage on the opening day of the second Test against Pakistan in Dubai on Wednesday.

Tahir finished with 5-32 and was ably supported by fit-again paceman Dale Steyn (3-38) as Pakistan were skittled out for 99 in 36.4 overs at Dubai stadium, after they had won the toss and elected to bat.

By tea South Africa, seeking a win to level the two-match series, reached 41 for one, with Graeme Smith on 12 and Dean Elgar on two. Opener Alviro Petersen fell lbw to left-arm spinner Zulfiqar Babar for 26.

In the morning session, Pakistan's top-order batsmen were so dismal that number nine Babar was top-scorer with 25 not out. Of the six boundaries in the innings, Babar hit three.

Steyn, cleared to play despite a hamstring injury, dismissed opener Khurram Manzoor off the second delivery of the match and then dismissed Younis Khan for 10 on a pitch which looked good for batting.

Steyn, doubtful to play after sustaining the injury on Sunday, showed no sign of discomfort as he dismissed Manzoor with a sharp outswinger, which was caught in the gully by Faf du Plessis.

Azhar Ali then put on 38 for the second wicket with Masood before he was trapped lbw by paceman Morne Morkel for 19.

Masood remained steady until he played an over-ambitious drive off Tahir and was bowled off an inside edge.

Steyn returned for his second spell to have Younis caught behind off a rash shot with the score at 60 before Tahir got two more on the same score.

Misbah, Pakistan's most successful batsman this year, misread a googly from Tahir while Akmal went back to play a sharp delivery and was bowled.

After lunch, Tahir bowled Shafiq off a rash shot for ten and then dislodged Mohammad Irfan's stump with a sharp googly.

In between Saeed Ajmal was run out for nought.

Tahir's previous best of 3-55 came against Australia at Johannesburg in 2011. – AFP