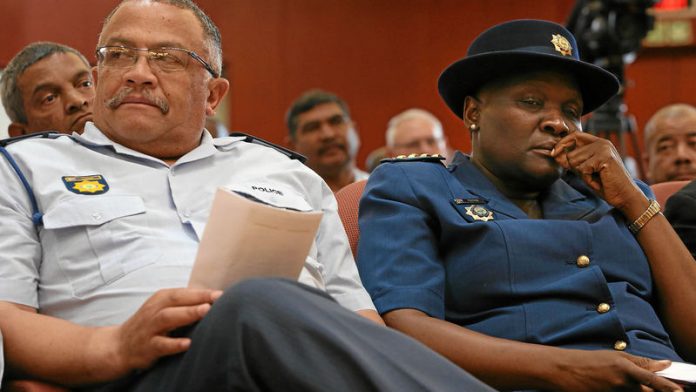 Until this week the battles within the police appeared to have involved mainly the Hawks and the crime intelligence division. But the latest drama involving Phiyega highlights how high the infighting has escalated.

While most of the claims and counter-claims have not been tested in court, they appear to have drawn the focus away from operational issues of crime investigation.

An SAPS colonel in the Western Cape told the Mail & Guardian this week that the paralysis in the division in the province is so serious that the rest of the force has resorted to gathering its own crime intelligence.

Last Monday Phiyega issued a suspension letter to the acting crime intelligence head, Chris Ngcobo, over his qualifications. On Wednesday a docket of defeating the ends of justice was opened against her in Cape Town. The suggestion from various sources, including Phiyega herself, is that the claims are a counter-offensive by Ngcobo and his supporters in the Western Cape against the police commissioner. (See “Top cop hits back at crime intelligence, Page 4)

In a memorandum sent to police staff on Tuesday, Phiyega blamed the Crime Intelligence Division for concocting and launching a criminal case against her.

Ngcobo, the former head of the VIP protection unit in KwaZulu-Natal, was appointed acting head of the intelligence in place of the suspended Richard Mdluli in June last year.

The current move against Phiyega follows a pattern of tit-for-tat court cases, investigations and media leaks that have come to define local law enforcement agencies in recent years.

Hawks investigation on Mdluli sets the tone
The tone was set by the Hawks’ investigation of Mdluli in connection with the 1999 murder of Mdluli’s alleged love rival, Oupa Ramogibe.

A security source told the M&G that the special account had been used for years as a political slush fund and that the division’s officers had merely taken this a step further by abusing it for their private benefit.

Mdluli was arrested on murder charges in early 2011. Since then:

• Hawks boss Anwa Dramat and Gauteng Hawks chief Shadrack Sibiya are reportedly facing possible charges for their alleged involvement in the illegal rendition of Zimbabwean nationals in 2010. The two men have been cleared by police of any involvement in the matter. However, the case against them appears to have been revived.

• Four weeks ago the Sunday Times claimed that Dramat’s arrest was imminent, following a year-long investigation by the Independent Police Investigative Directorate. Following the article, Sibiya told the M&G that it is a matter of public record that crime intelligence had reported the rendition matter to the police, and accused the division of waging a dirty tricks campaign against him and Dramat.

• Following a 2011 report by senior crime intelligence official Mark Hankel, who is understood to have played a key role in assisting the Hawks investigation of his bosses, information was leaked to the media relating to Hankel’s security clearance. The leak alleged that Hankel had failed two polygraph tests, but that the tests were “inconclusive”.

• Senior prosecutor Glynnis Breytenbach was suspended in April 2012 based on an allegation that she had lacked impartiality in her investigation of mining company Imperial Crown Trading. She insists that she was suspended for pursuing criminal charges against Mdluli. Her boss, alleged Mdluli ally Lawrence Mrwebi, signed off on the internal probe that triggered Breytenbach’s suspension.

• Breytenbach wrote to the inspector general of intelligence, Faith Radebe, objecting to Mrwebi’s withdrawal of corruption charges against Mdluli in early 2012. However, Radebe ruled that criminal investigations are a police responsibility and that the matter should go back to the NPA to reinstate criminal charges against the CIS chief.

• Breytenbach was cleared by an internal disciplinary hearing earlier this year, but the NPA is appealing against the ruling. The authority has also continued to investigate Breytenbach.

The battle between commissioner Phiyega and acting intelligence head Ngcobo appears to have been sparked by a State Security Agency (SSA) check on his security status after his appointment in June last year. Ngcobo was refused top security clearance after the SSA found a “discrepancy” in his qualifications and the matter was referred to Phiyega, who placed him on special leave. The charge of defeating the ends of justice was laid against Phiyega two days later.

The latest drama, which some police sources believe is a move to discredit Phiyega, has brought into focus the extent to which the police service has been overtaken by internal battles.

Phiyega’s spokesperson, Solomon Makgale, said this week that the commissioner will not be deterred by those who are not toeing the line.

There has been some opposition to Phiyega’s “clean-up strategy”, he said, but she will continue with her plan to bring back “integrity and discipline” following a “leadership void at the organisation”.

The Hawks’ investigation of crime intelligence appears to have pitted former Scorpions members involved in the corruption probe of then-deputy president Jacob Zuma against those seen as his supporters.

Mdluli, who has been described as a Zuma supporter, was appointed to head the intelligence division in 2009.

The investigation of Ramogibe’s murder was initially led by Sibiya, a former Free State Scorpions boss, before Dramat called in investigators from Cape Town. It was alleged that Sibiya and Johannesburg Hawks investigators initially involved in the case received death threats.

In March 2011 Mdluli and three of his colleagues were arrested for their alleged involvement in the 1999 murder. During the investigation, the Hawks claim to have uncovered allegations relating to senior officers’ abuse of the secret account meant for covert crime intelligence operations .

Secrete police report surface
In September 2011 Mdluli and Barnard were arrested and charged with fraud and corruption relating to their alleged abuse of the account. Lazarus was later arrested on the same charges.  Last year a secret police report surfaced containing allegations of abuse by crime intelligence officers since Mdluli’s appointment in 2009.

The report, compiled by Hankel in 2011 and sent to the inspector general of intelligence, noted the discoveries made by the Hawks investigation into Mdluli and senior crime intelligence officers.

But Mdluli’s alleged supporters appear to have started mobilising. In November 2011 President Zuma appointed Mrwebi to head the National Prosecuting Authority’s Specialised Commercial Crimes Unit. The same month Mrwebi and then acting NPA head Nomgcobo Jiba received representations from Mdluli asking for the corruption charges gainst him to be withdrawn.

The representations centred on assertions that Mdluli was the victim of a conspiracy by police members who disapproved of his promotion in 2009 to head of crime intelligence.

While the police are trying to put out fires arising from crime intelligence, Phiyega and the NPA are also embroiled in an application by legal watchdog Freedom Under Law (FUL) for the reinstatement of criminal charges against Mdluli.

FUL won its case in September, with Judge John Murphy ordering the NPA to reinstate the murder and fraud charges and the police to reinstate and conclude disciplinary charges against Mdluli.

Both the NPA and the police are applying for leave to appeal against Murphy’s judgment.

The advocate for the police, William Mokhari, also laid a complaint of misconduct against Murphy with the Judicial Service Commission this week.

The complaint followed a tense interaction between the two at the appeal hearing last week, during which Mokhari refused to answer a question Murphy put to him.

Murphy has since recused himself from the case.