Smaller bottles could be alcohol brand’s key to Africa 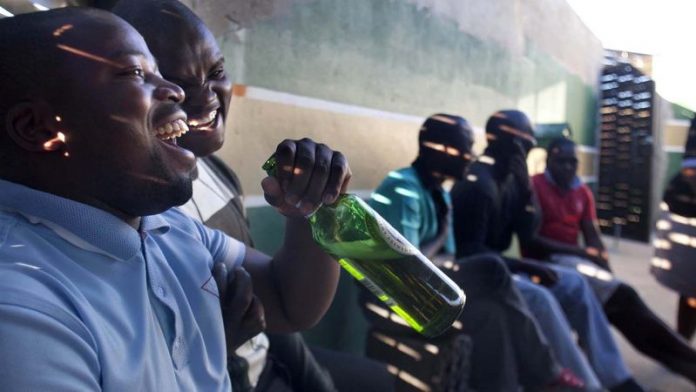 Diageo, the maker of Smirnoff vodka, Johnnie Walker whisky, and scores of other liquor brands, has introduced 200ml containers – a bit less than a third the size of a normal bottle of spirits – in sub-Saharan Africa.

The approach provides a cheaper way for friends to share one of Diageo’s global brands instead of choosing a local tipple or a beer. "There’s a perception that spirits are expensive in Africa," Gerald Mahinda, a managing director at Diageo, said on the sidelines of an investor conference in London. "This allows people to try them."

With fast-growing economies and relatively low alcohol consumption – Nigerians last year drank 0.3 litres of spirits each and Ghanaians 2.4 litres, versus 20.9 litres in Russia and 7.4 litres in the US. Diageo says Africa is becoming a major battleground for alcohol producers. Though the scant consumption is largely due to low incomes, consumer spending power is increasing, Mahinda said.

Diageo has introduced 200ml bottles of Johnnie Walker Red, one of the cheapest variants of the whisky, in three countries. A bottle costing some $5.43 in Ghana has six servings, making it roughly equivalent in price to Guinness beer, which runs about 94 US cents for a 330ml bottle.

Aspirational Drinkers
The smaller bottles have helped the brand grow an average of 60% per year in South Africa since their introduction in 2010, according to Diageo, appealing to aspirational drinkers who want to try something new. Last year, the company started selling the bottles in Ghana and Nigeria.

While beer accounts for about two-thirds of Diageo’s Africa revenue – its Guinness was first exported to Sierra Leone in 1862 – the company lags behind SABMiller and Heineken in the region.

In sub-Saharan Africa sales of branded spirits, by contrast, the company is the clear market leader, according to UBS, eclipsing rival Pernod Ricard South Africa. Diageo had Africa revenue of $2.4-billion last year, or 13% of the company’s global total and almost seven times Pernod’s sales in the region.

Pernod’s incoming chief executive officer, Alexandre Ricard, has said Africa is a priority and in September told reporters that the region is "like Asia was 15 years ago." The company made its first major push in the region outside of South Africa in the past two years, and Africa accounts for roughly 3% of global sales, according to Pernod.

Sampling Strategy
"Diageo has a clear competitive head start" over Pernod, said Melissa Earlam, an analyst at UBS in London. With demand rising fast, though, there’s plenty of opportunity for all players, she said.

Sub-Saharan Africa has expanded at an average of more than 5% annually since 2010, and Diageo’s sales growth in the region has averaged 13% a year since 2004. Diageo’s shares rose 1% to 1999.5 pence as of 8.35am in London on Monday, giving the company a market valuation of 50.19-billion pounds. Its shares have increased 12% this year.

With its mini-bottles, Diageo is taking a page from consumer-goods giant Unilever, which has long sold small sachets of shampoos and soaps in Asia for just pennies apiece, according to Martin Deboo, an analyst at Investec. "It’s about educating the consumer – clearly most Africans aren't going to go straight for 700ml bottles of Johnnie Walker Blue" – a variant that can top $200 per litre, Deboo said. "It’s not just about price – it’s a sampling strategy."

Nigerian Guinness
The company is working with owners of South African shebeens  to attract lower-income drinkers. Diageo sales people tour such taverns urging bartenders to serve shots of its spirits. To woo drinkers of moonshine and local brands, Diageo has created cheaper labels for Africa.

Its Jebel gin, Smirnoff 1818 vodka, and Richot brandy, for instance, typically cost less than $10 for a standard 700ml bottle. Such brands offer better margins than beer, Diageo says, and are almost as profitable as big international spirits like Johnnie Walker or Baileys.

Diageo’s plans what it calls a "ladder" of brands at different prices to cater to consumers who may seek a shot of Johnnie Walker after they get their paycheck but choose a Jebel in tighter times. Africans, Mahinda says, are keen to adopt new products, as seen in the rapid growth of mobile technology across the continent.

"Ten to 15 years ago, there was disbelief about what mobile phones would do to Africa. Now people can’t keep up," he said. "I think people will be shocked in the next four to five years." – Bloomberg