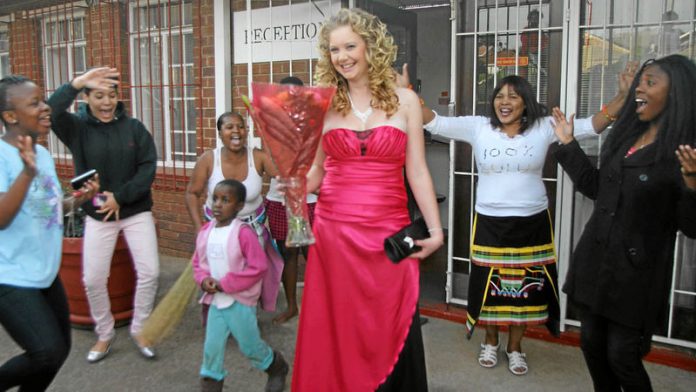 Belinda (18) stands stiffly against the security gate in the hallway, biting her lip as she stares out at the empty parking lot.

"What time did they say they'd be here?" she asks her friend as she glances at the time on her cellphone for the umpteenth time.

Her relief is palpable when there's a hoot at the gate, signalling the arrival of the first of the "carriages" for the afternoon.

"Aunty Cheryl, he's here!" she shouts, sweeping up her backpack and shoving her cellphone into her back pocket.

"Aunty" Cheryl Lee, the soft-spoken energetic Durbanite who runs Strathyre Girls' Home, appears from around the corner. Despite running late on such an important day, Belinda won't leave until she has spoken to Aunty Cheryl, who has arranged for the teenager's hair and nails to be done at nearby Darras Centre in eastern Johannesburg. They quickly go over the plan for the afternoon, then Belinda runs off to the waiting vehicle.

With Belinda gone, it's the first time today Lee has been able to take a breather, and, teacup in hand, she sinks gratefully onto the couch in her office.

'Hurtful and disappointing'
Since early morning she's had to effectively stage-manage this, the most important occasion in Belinda's teenage life, her matric dance. There have been final dress fittings, salon appointments and transport to the venue to be finalised. On top of this, Belinda's parents called to announce they were heading into town to see their daughter off.

One of the hardest parts of the job for Lee is managing what she calls the "often unrealistic" impressions the girls at the home have of their biological parents. Especially when promises, ranging from new wardrobes to being allowed home for good, fail to materialise.

She tells of finding girls standing forlornly by the pay telephone in the dining hall for hours, waiting for the promised call from a parent.

"I find it hurtful and disappointing on their behalf … as an authority figure, yes, but also as a mother myself," she says.

All the staff at the home are surrogate mothers to the 50 girls here; some of whom have grown up at either Strathyre or in the welfare system, and have known no other life.

The home was founded by the Salvation Army nearly a century ago, and has been in the Johannesburg suburb of Kensington since 1968.

The girls have been sent to live there by the courts. Some have been ­victims of abuse and neglect, some were abandoned and others were placed there simply because their families could not afford to keep them.

Exchange programme
Whitney (18) gestures proudly to the satin gown she wore to her matric dance. She's in a different school from Belinda and her dance was two weeks ago.

"Everyone was going for the Beyoncé look, but I chose to be different, with the Kim Kardashian look, but minus the window-wipers [false eyelashes]," she says, giggling.

The confident, articulate teenager who, three years ago, represented her school on an exchange programme in England, has lived at Strathyre for 11 years. She is guarded when asked about growing up in a children's home.

"It's okay, I guess … it's just when your friends at school start saying, 'hey, can we come chill at your crib', then, you know …"

Her best friend, Almonique (18), nods her head vigorously in agreement.

The tall beauty says Whitney has a reputation for being a tomboy. "So we were shocked to see her in a ballgown and heels!"

Neither of the girls had a date for her matric dance because, they say, boys can be put off by the "baggage" of going to the ball with a date who grew up in a home.

Surrogate parent
Matric dance night is also traditionally viewed as the time when your parents are on hand to wish you well and give you the standard life-changing advice as you disappear into the night in a cloud of satin and perfume.

"It was emotional for me because I'd always imagined my mother would be there, helping me get dressed," says Almonique.

Both girls say the sadness of not having their mothers there was eased by the presence of their "other mother", Aunty Cheryl.

Not only is she there as a surrogate parent, after-school teacher and problem solver, but she arranges for the girls' matric dance dresses to be made by a local seamstress and for their hair, make-up and nails to be done at a local salon. Aunty Cheryl is the only mother many of them have ever known.

The 63-year-old mother of four daughters and grandmother of eight grandchildren trained as a missionary, but says she knew her true calling when she first walked through the gates of Strathyre three years ago.

"I just knew it was for me, but …" she says, hesitating, her voice choking with emotion.

An unspoken reality hangs over Strathyre like a grey pall. The home is facing a serious funding crisis.

Falling pregnant
With the costs of running the home increasing, and funding sources drying up, they're battling to make ends meet. This month the home's management had to ask the Salvation Army's headquarters for help, just to pay staff salaries.

The home isn't the revolving door many assume it to be – some of the girls live here for up to a decade before either their parents claim them, they are adopted, or they become old enough to leave.

In many cases, says Lee, prospects are bleak: quite a few of the girls end up falling pregnant shortly after leaving the home, dashing their chances of completing an education.

In a few months both Whitney and Almonique will finish school and will leave Strathyre. For many teenagers, the prospect of leaving home is exciting.

"I'm actually not excited, I'm actually afraid of growing up … of the decisions I'll have to make without anyone guiding me," says Whitney.

It's what Lee says she fears most: that all the lessons the girls learnt at the home, and the sheltering nurturing environment they were raised in, will come to naught when they're on their own.

"That's why I stress to the staff … that they should be patient with the girls, to put up with their moods and … I tell them, you're the only mother they have right now."

Doorframe
The conversation is interrupted by a burst of ululation and shouting from the courtyard. The car is here to collect Belinda and her partner to ferry them to the dance in Boksburg.

The teenager, blushing furiously as she clings to her partner's arm, totters up the stairs in her platform heels, as the staff and girls flank them in a "guard of honour".

Dressed in matching black and cerise, a shy-looking woman stands next to the car with her husband, weeping softly. She dabs at her face with a tissue, a hand over her face.

They are Belinda's parents, and they drove through the night from Nelspruit to be here for their daughter's big day.

Leaning against the doorframe of the entrance hall, Lee waves Belinda off. Her eyes are moist, but she doesn't cry.

It's at moments like this that she knows she made the right decision about what to do with her life. As she did with so many other matric dances that have taken place these past few months, she is putting on a brave face. For the girls' sake.

The burden of the financial situation weighs heavily on her heart, but she is determined to continue.

"I just sat down and had a good cry, but then suddenly the inner strength was there; I'm determined to fight on, because I will not let this happen to them …"

She adds quickly, fiercely: "To us!"

Memories are made of this

Preparing to dance the night away

Having the night of your life