Le Clos: I want to be the best swimmer in the world 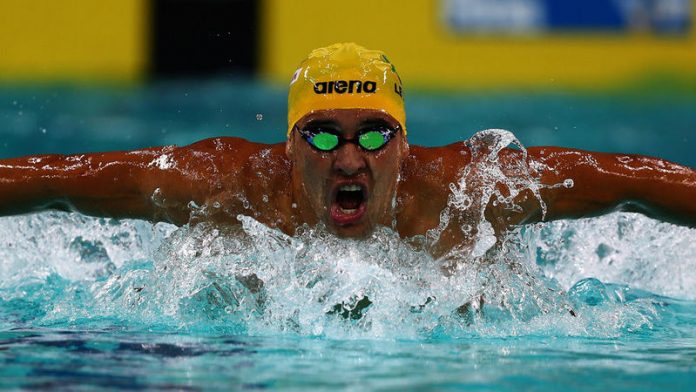 Chad le Clos was woken up by a "scary" earthquake but took care of business as usual as he stormed to victory in the 100 metres butterfly at Sunday's World Cup series in Tokyo.

Shaken but unstirred, the 21-year-old will officially be crowned champion for the second time in three years at the eighth and final stop in Beijing later this week.

Le Clos, who famously out-touched his idol Michael Phelps to win the 200m butterfly gold at last year's London Olympics, told AFP he had his sights on the American's mantel of swimming's greatest ever.

"I want to be the best swimmer in the world – the best all-round swimmer," he said after finishing second in the 200m individual medley.

"I want to make sure I swim as much as I can and get the best out of me that I possibly can, whether that's two races, or seven races, or eight races."

Sensational
The day began with unexpected drama for the swimmers with a quake rocking the capital around the time they would have had their alarm clocks set for.

"I was sleeping in my room and thought my room-mate was playing with my bed, then realised I didn't have a room-mate, so I ran outside."

After his sensational Olympic gold, Le Clos is hungry for more success.

"The first thing is to try and get a long-course world record," added the 100m and 200m butterfly world champion, who ended his weekend with five race victories. "I think the 200 fly is my best shot for now."

That world record is owned by Phelps, the most decorated Olympic athlete of all time with 22 medals, 18 of them gold.

"I'd like to break as many records as I can but I've got to take baby steps, just look at things one at a time," said Le Clos.

Four gold medals
"At the moment it's more about getting my medley right. My breaststroke is probably not the greatest.

"In 2016 I'm going to try to break the world record, maybe a bit before. But for now I want to win four gold medals at (next year's) Commonwealth Games."

Short-course queen Katinka Hosszu added victories in the 400m individual medley, which she won comfortably in 4:25.97, and the 200m butterfly, when she produced a stunning fightback over the final 25 metres to beat Japan's Yai Watanabe.

The Hungarian, who has wrapped up her second successive World Cup title, also dead-heated for first in the 100m individual medley with Australia's Alicia Coutts, making it five more wins over the two days.

Russia's Iuliia Efimova kicked the evening session off with a bang, setting a short-course world record in the women's 50m breaststroke in 28.71.

"I'm a little surprised," she told AFP before coming back to win the 200m. "I had no time to warm up… my hair was still wet."

Japan's Kosuke Hagino beat Le Clos to the men's 200 individual medley gold in a Japanese and World Cup best 1:51.50 while Russia's Vladimir Morozov won the men's 50m freestyle carve-up, thrashing through the water to win in 20.72, ahead of American Anthony Ervin, who touched in 21.10.