A perpetual life of mud, shit and fire 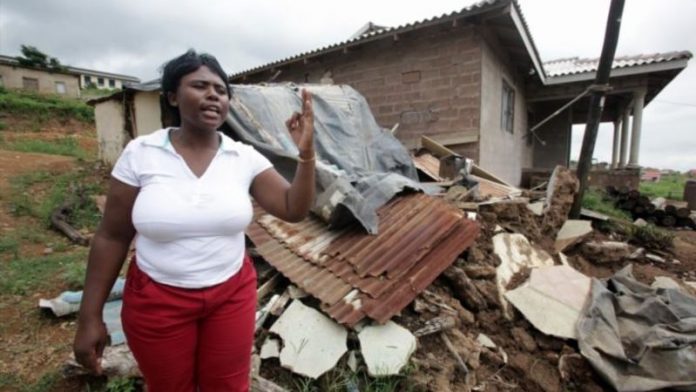 Our movement of shack dwellers – Abahlali baseMjondolo, representing some of South Africa's poorest people – was formed in 2005 in Durban and now has 12 000 members in more than 60 shack settlements.

We campaign against evictions, and for public housing: struggling for a world in which human dignity comes before private profit and land, cities, wealth and power are shared fairly.

We have won many important battles in court, including the overturning of the anti-poor Slums Act, but the law has not bought justice.

Despite that victory, thousands of shack dwellers were forcibly removed to make way for developments ahead of the 2010 World Cup.

Most were dumped in transit camps, left to rot without basic services. Some camps, such as Isipingo, south of Durban, were built on flood plains.

Promises were made to rehouse these people using a state-assisted housing programme, but cities refused to fulfil these promises.

Instead, corrupt politicians benefit from these programmes by allocating funds to loyal members of the ruling ANC and getting kickbacks from the builders to whom they award contracts. Homes are poorly built as a result, and corruptly allocated.

If you are too poor, you cannot pay the bribe to get rehoused; if you are from the Eastern Cape and not an ANC member, you will be excluded; and if you are an active member of Abahlali, you will not simply be denied housing, you may well be arrested, tortured or killed.

Therefore we continue to take direct action to move our rights from paper to reality, from abstract to concrete.

When we are denied land we occupy unused land. The state and the rich call this a criminal act; we call it the democratisation of urban planning and the realisation of our right to the city.

When they evict us, we rebuild. We have rebuilt nine times at the Marikana land occupation in Cato Crest, Durban.

When we are denied water and electricity, we connect ourselves. When we are disconnected, we reconnect. Recently, nine people were shot during a disconnection in Reservoir Hills, Durban. Two people, Malizo Fakaza and Nhlanhla Mkhize, were killed.

When our legal marches are ignored, our court orders are ignored and the Constitution is ignored, when we are treated as dirty people who do not count before the law, then we engage in the politics of disruption. We organise road blockades – we recently organised eight such blockades one morning during rush hour.

It is a tough time for our movement. The rich and the state have decided to drive us out of the city. Our membership is multiethnic, but includes many isiXhosa speakers from the Eastern Cape.

Increasingly the ANC in eThekwini and the province of KwaZulu-Natal presents such non-Zulus as outsiders who should "go back where they come from", and so the idea that South Africa belongs to all who live in it is being replaced by a dangerous and divisive new politics.

The state is so threatened by the poor – especially the organised poor, the strong poor – that it has abandoned the rule of law. A politics of blood has replaced the politics of peace, and municipalities are setting up militarised units to stop land occupations. We have been evicted, driven from our homes by party thugs, beaten, tortured and shot by the police.

Nqobile Nzuza, a 17-year-old schoolgirl, lies in her grave, shot in the back of her head on September 30. Witnesses allege that a senior police officer shot her, but no arrest has been made.

Nkululeko Gwala died after being hit by 12 bullets on June 25.

Thembinkosi Qumbelo was gunned down on March 15. All these murders happened in Cato Crest.

We believe that the reason for the absence of arrests is that these killings were political, carried out with the support of top politicians.

Senior politicians in Durban's city council and the KwaZulu-Natal legislature have acted and spoken in a way that was widely understood to be in support of murder.

The assassination of government critics is now a routine feature of life in the city, and has given rise to a new profession: the hitman. There is a high rate of unemployment in Durban, and no shortage of young people willing to take this blood money.

The recent Manase report exposed massive political corruption in the eThekwini municipality, which includes Durban, and yet no one has been arrested.

Obed Mlaba, who was mayor of Durban when corruption became the order of the day, has been tipped to become the new ambassador to the United Kingdom. The British people should know he is a disgrace to our country.

Much is at stake. If South Africa's urban poor do not win this battle, our cities will become ATMs for the politicians and the rich. They will become cities of walls and guns, of blood and fear.

In Durban and beyond, Nelson Mandela's vision of dignity for all has already been lost. His promise of a universal right to free housing, free education and free healthcare has not been realised.

Thabo Mbeki's administration was too high to descend to the ground; Jacob Zuma's relies on violence to silence the opposition.

We have learnt that by demanding decent housing we make enemies, and that by occupying land we make those enemies even more ruthless. But we cannot wait in the mud, shit and fire of shack life for ever.

We have no choice but to take our own place in the cities and in the political life of the country.

But we are under no illusions. There will be more evictions, more beatings, more torture, more shootings and more killings.

Yet to be poor in South Africa is already a living death and so we have no choice but to keep going forward. – © Guardian News & Media 2013

S'bu Zikode is the chairperson of Abahlali baseMjondolo.

Postcolony SA needs to work out a new way

Not wanted here, there or anywhere