The mayor at the eye of Philippine storm 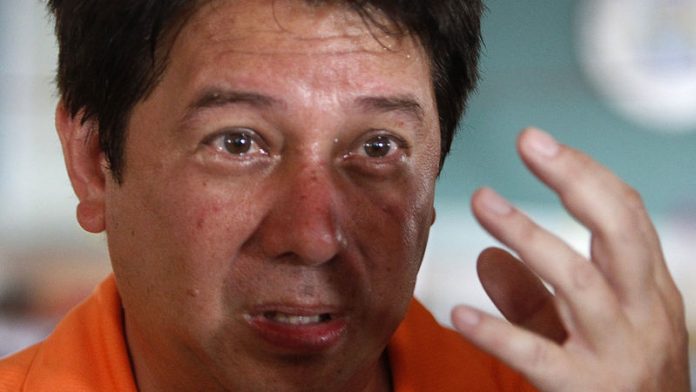 Minutes before a tsunami-like storm surge slammed into the Philippine coastal city of Tacloban, a tall man in a motorcycle helmet strode along the shore through ferocious typhoon winds.

Mayor Alfred Romualdez (51) was wearing the headgear to protect against what he called a wind so strong "it would take your eyes out". He didn't see the wall of water coming and was lucky to survive the catastrophe that killed at least 819 people there and 3 633 across the central Philippines.

The disaster not only flattened his city, it also dredged up a history of enmity between his political clan, led by shoe-loving former first lady Imelda Marcos, and the family of President Benigno Aquino — the country's two most influential political families.

President Aquino, under mounting criticism over his handling of the disaster, has sought to deflect some blame toward Romualdez's administration, whose staff and security forces have been decimated by the storm.

"It appears [Tacloban] was not that prepared, let's just say, compared to other areas," Aquino told reporters in Manila a day after the typhoon hit.

The mayor's wife, formerly a sultry B-movie star and now a Tacloban city councillor, held a tearful news conference in Manila, apparently prompted by Aquino's remarks. "This is not politics," said Cristina Gonzales-Romualdez, her voice breaking.

The finger-pointing, however, is sure to worsen as the typhoon's official death toll rises to nearly 4 000 amid unrelenting recriminations over poorly enforced evacuation orders and tardy relief efforts.

Super Typhoon Haiyan turned Tacloban into a corpse-strewn ruin and made Romualdez — nephew of Imelda and the late dictator Ferdinand Marcos — its most prominent survivor.

It has also stirred up difficult questions over whether the Marcos clan's history of bad blood with the current First Family has hindered the often chaotic rescue and recovery efforts and whether politics had a role in one of the country's worst natural disasters.

President Aquino's father, also called Benigno, was assassinated on his return from exile in 1983 when Ferdinand Marcos was president. The Marcos government said it was a lone gunman who broke through security and shot Benigno Aquino dead on the tarmac.

The corruption-riddled Marcos regime was overthrown three years later by a "people power" revolution, fuelled by Benigno Aquino's death and led by his late wife Corazon.

Captain without a ship

The Romualdez-Marcos clan have long had a political stranglehold over Tacloban. Hanging in City Hall is a typhoon-tilted portrait of the man Romualdez replaced as mayor in 2008: his father Alfredo, who held the position for nine years.

Imelda's birthplace of Tolosa, a short drive south of Tacloban in Leyte province, was badly affected by the typhoon. The former first lady was crowned "The Rose of Tacloban" as a teenage beauty queen.

Romualdez has defended his preparations for the storm, which he said were approved by national government officials at a meeting 24 hours beforehand. "They said everything was okay," he told reporters at the battered City Hall on Friday, his voice hoarse from days of shouting and little sleep. The odour of a nearby open-air morgue wafted through the broken windows.

A week later, an average of only 70 city officials, many of whom lost homes and loved ones, were showing up for work each day, compared to a staff of 2 500 before Haiyan struck.

Romualdez now resembles a captain without a ship, trying to marshal meagre resources while the national government, aided by US military might and international aid agencies, increasingly takes control of resurrecting his city. Romualdez has complained that Aquino's government is undermining him, citing a request from Manila to declare the city administration dysfunctional so the national authorities can take full control.

"This is very lamentable because we are doing everything we can to help the people and fulfil our duties and responsibilities as elected leaders," he said.

As every politician knows, natural disasters can make or break careers.

George Bush's mishandling of the Hurricane Katrina disaster in 2005 overshadowed his second term as US president, while New Jersey Governor Chris Christie's response to Hurricane Sandy seven years later has helped make him a Republican frontrunner for a White House bid in 2016.

Romualdez's heroic story of survival masks criticism that he ignored his own evacuation advice and clear warnings of a dangerous storm surge from the national weather centre.

Marinel Raandaan, a 32-year old mother of four who was among families that have built temporary shelters with no government help at a property owned by Imelda Marcos, said the city should have anticipated the storm surge.

"He's the man of the city, the boss, he is the father of the town so we supported him. But now we're frustrated," she said.

Romualdez was at his home on the coast when he heard by radio that the sea was receding. When he went to the shoreline to investigate he found the sea had pulled back by 100m — the sign of an approaching storm surge or tsunami.

The water came suddenly. Romualdez and several aides took refuge in a two-storey building, then punched a hole in the roof and clung to the rafters as the water, six metres high in places, rushed through the floors below.

It was 90 minutes until the water subsided enough for him to climb down and find his wife and two children clinging to a post. They had been fleeing from another family house when their car was swept up in the wave, city officials said.

Romualdez said nothing in the city's experience prepared it for the power of the wind and water. Many people were killed or injured in schools acting as evacuation centres, but which were built to withstand winds only half the force of Haiyan's.

But even one of history's strongest storms is unlikely to dislodge the Romualdez-Marcos clan's sway over Leyte.

Imelda Marcos is now 84 years old and a second-term congresswoman in Ilocos Norte, her late husband's home province. Her family has launched its own relief operation to deliver portable water treatment plants, her son Ferdinand Marcos Jr., himself a senator, told Reuters.

And rising from a mound of debris in the city's storm-ravaged centre is a statue of the former dictator Marcos. It is completely undamaged. – Reuters