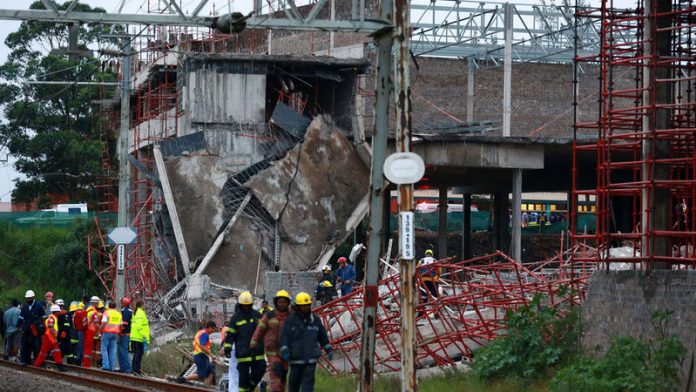 Construction at a shopping mall in Tongaat, north of Duran, where a roof collapsed on Tuesday killing at least one person and injuring 29 others, should not have been taking place, eThekwini deputy mayor Nomvuzo Shabalala said.

"We took them [the contractors] to court a month ago. We thought they had stopped," she told reporters on the scene.

The reason the municipality took the contractors to court was because "they hadn't followed processes".

Netcare 911 spokesperson Chris Botha said a concrete slab the size of a soccer field collapsed at the mall.

He said 50 people were feared trapped under the rubble.

Lieutenant Mandy Govender said one person died and 26 people were injured when the roof collapsed on Tuesday.

'Combing the area'
"Almost the entire area of the construction site in the mall is down," she said.

"We are still combing the area with sniffer dogs searching for survivors. All the workers are not accounted for at this stage. Emergency services are on the scene as we speak."

Botha said earlier that roads surrounding the construction site had been closed.

A South African Press Association reporter on the scene said hundreds of onlookers were standing at the edge of the cordoned off construction site.

Trains passing the mall had to slow right down as people were cleared from the railway line that borders the mall.

Fiona Moonean, whose house is located directly across the railway from the collapsed level of the mall, said she was washing dishes at the time of the incident.

She said that a few days earlier, workers had started removing the scaffolding supporting the level.

'Scaffolding fall'
"Just after 4.30pm it was a thunderous sound. Before the bang, I heard too much scaffolding fall. That's when I picked my eyes up [and looked through her window at the mall]. The whole concrete slab crashed down with the pillars. The smoke and dust was too thick. I heard them screaming out for help in Zulu."

She called the emergency services and a woman took down her details.

"She had to calm me down because I was so freaked out. For me, the most traumatic is the sound of the guys' voices. That is the part that plays in my head," she said. – Sapa