The new Malema: A rabble-rousing orator 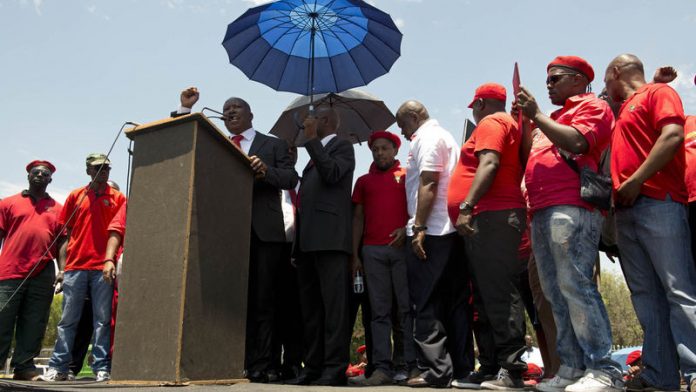 Outside a court in Polokwane recently it was "the apartheid ANC" and the "black Boers" who were running the government. So much for any chance at reconciliation with the ANC, whose colours he once said ran in his veins. But then, pigs will fly before the ANC invites Malema back into the fold.

"We are prepared to die for [President Jacob] Zuma", circa 2008, must have seemed a good idea at the time, but contrast that with "Down with the criminal Jacob Zuma, down!" circa November 2013, and you are going to have some trouble avoiding being tagged a flip-flopper, or worse.

But the snappy phrases notwithstanding, Malema does not shine in the short game. In interviews he comes across as ponderous and, when speaking for anything less than 15 minutes, he appears to have nothing to offer bar call-and-response slogans at the beginning.

It is only around the 20-minute mark (depending on the audience, time of day and, no doubt, his blood-sugar level) that the switch flips and you get to see Malema for what he is: one of the top political speakers the country has to offer.

Of course, the only people who ever get to see that are journalists and, these days, crowds of no more than 1 000 people at a time rallying to the cause of the Economic Freedom Fighters (EFF).

No media outlet in its right mind will give Malema the full one hour he inevitably and unerringly speaks for, and no mainstream audience will sit still for long enough to absorb it. Connoisseurs know that the long game is the most beautiful form, but that does not make it any less dead.

Admittedly, the bar is set unsettlingly low. Zuma can put a room to sleep in 10 minutes flat.

Helen Zille brings power but little charisma to the stage. Trevor Manuel is all intellect; Mamphela Ramphele cannot help but lecture; Lindiwe Mazibuko's fire appears feigned. As for the average level of oratory in Parliament, "dismal" pretty much covers it.

His message is thin and his ideology is internally inconsistent when it is not plain misguided. His tactics are crude and his exposition is fragmented. But his delivery allows him to power through all those failings and keep a crowd spellbound even under the midday summer sun in Polokwane.

It may have something to do with the untutored rawness of the man.

"I don't think he takes instruction too well," says Fiona Forde, the journalist who literally wrote the book (An Inconvenient Youth) on Malema. "I've certainly never seen anyone try to tutor him in these things."

Even so, at some point between 2008, when he was reaching peak prominence with outrageous statements and unflagging campaigning for Zuma, and 2011, when his romance with the ANC mother ship got decidedly rocky, Malema changed from a run-of-the-mill ­demagogue into a notable speaker.

He learnt the tricks of pitch and tone, he adopted a mesmeric cadence and his command of English improved notably. Where before he had needed struggle songs to get crowds to their feet, the new Malema can inflame and cajole, and even admonish, with only words.

His critics still describe him as a buffoon and his opponents paint him as a fool – and he has provided ample ammunition for both charges. Refusing to debate the Democratic Alliance's Mazibuko in a two-header in May 2011, for example, allowed him to be painted as fearful of intellectual combat. In the long run, however, that very same incident may have given Malema one of his most famous victories.

"Even now you can ask people on the street who ‘the madam' is, and they'll laugh and tell you ‘Zille'," says Ford. "That really resonated. It really got the message across."

Mazibuko, Malema explained at the time, was "the tea lady". If he was to debate anyone, it would be her boss, "the madam" – Zille. It was a barb right to the heart of the DA's greatest weakness: the perception that it remained a white-run party.

However, his real victories did not make headlines the way that incident did, buried as they were in the long game. In communities in protest, Malema stood up and spoke for an hour.

He addressed farmworkers and mineworkers; he addressed suspended soldiers and disgruntled security guards. Some meetings were bigger than others, and some produced more adherents than others, but with each performance the Malema brand grew.

Each built the asset base of what would only much later become the EFF.

"In a revolution, size matters," Malema told his supporters in Polokwane on Monday, about 50 minutes into his speech. "The bigger you are in numbers, the [better] chances you have … the chances you have for winning the objective of the revolution."