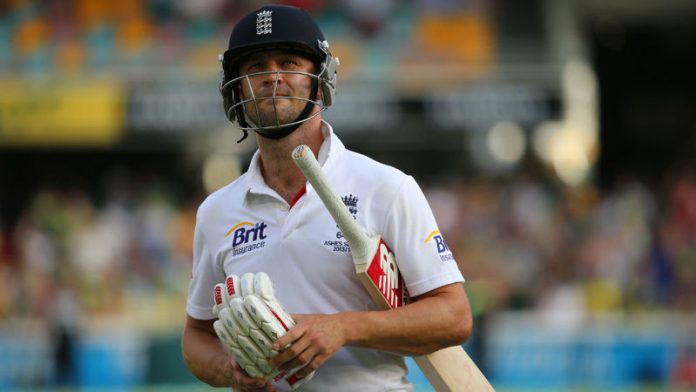 The sight of the normally obdurate Jonathan Trott swishing and missing with alarming regularity during his two brief innings in Australia was a telltale sign that all was not right.

England's number three, so often the rock of his side's batting order since making his test debut in 2009, managed just 19 panicky runs in the 381-run humiliation that ended on Sunday and was clearly unsettled by the fired-up Australian pace attack.

Shaken by the ferocity of Mitchell Johnson's short-pitched bowling in particular, Trott crumbled and, to rub salt into the wound, his second-innings dismissal was labelled as "weak" by Australian opener David Warner.

Trott's performance was also criticised by former England players now working as television or radio pundits but after the announcement that he was leaving the Ashes squad on Monday with a stress-related illness, there was widespread support for his predicament.

Former England captain Michael Vaughan went on Twitter to apologise. "I do feel guilty for criticising Trott this week," he said. "I wasn't to know what he was going through and I can only comment on what I see …"

Speaking to the BBC, Vaughan added: "I'm desperately sorry for him, he's made exactly the right decision.

"I think the hardest thing is that it's not visual. I don't know how long it's been going on but I criticised him in the second innings and you look back and I wish I hadn't now, I wish I'd have known he was going through troubles.

'Serious issue'
"An Ashes series away from home is so pressurised. It's going to be a really tough ask to come back from this.

"It's certainly around the cricketing fraternity, we've seen a number of players come out and talk about it. It's a serious issue because it's not visual and they hide it away."

Long stretches away from home combined with intense media scrutiny have taken a toll on international cricketers in the past with former England batsman Marcus Trescothick leaving the 2006-07 series in Australia because of depression.

"It's debilitating, it grinds you down and just gets to you nonstop. There's no hiding place from it, it's 24/7. He's got to just take a bit of time to get back on track and get back happy again," Trescothick said in a BBC radio phone-in on Monday.

Matthew Hoggard, who was part of Vaughan's 2005 Ashes-winning side, said many cricketers suffered from stress. "If you know that people are suffering and you're not going to take them then you could be losing half your team because I don't think it's just an isolated incident," he told the BBC.

Another former England captain, Nasser Hussain, said the news had come as a shock. "It's amazing news, no-one heard any whispers about it over here," Hussain, part of the Sky Sports commentary team, said.

"You just don't know what is going on in someone's mind and it's obviously a highly stressful situation and it just tipped him over the edge.

"He was the glue that held England's batting line together."

Sympathy also came from Trott's England team mates with bowler Stuart Broad saying on Twitter: "Love Trotty. Absolute champion of a man. He knows he has the support of all the people around him. Puts cricket in perspective." – Reuters