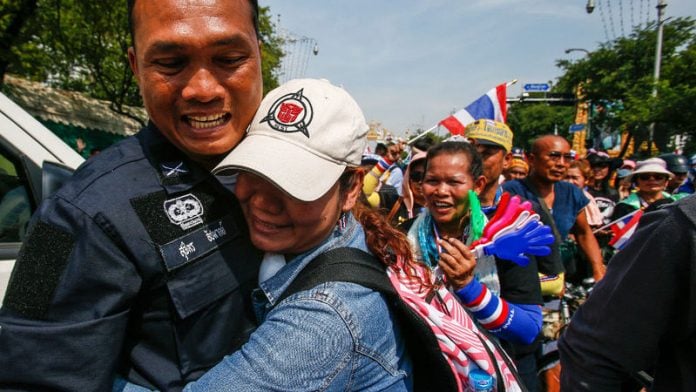 In jubilant scenes hard to imagine after days of clashes, protesters swept aside barricades in old Bangkok on Tuesday to occupy the grounds of Prime Minister Yingluck Shinawatra's office and warmly greet the police who, until just hours before, had rained teargas and rubber bullets upon them.

Cheering, flag-waving crowds marched through the gates of Government House, a heavily fortified flashpoint in a protracted protest aimed at toppling Yingluck's government and banishing the influence of her brother, exiled former prime minister Thaksin Shinawatra.

"I feel great," said Supradith Kamlai (70), a retired nurse who thronged the area with thousands of other protesters after police were ordered to stand down on Tuesday morning. 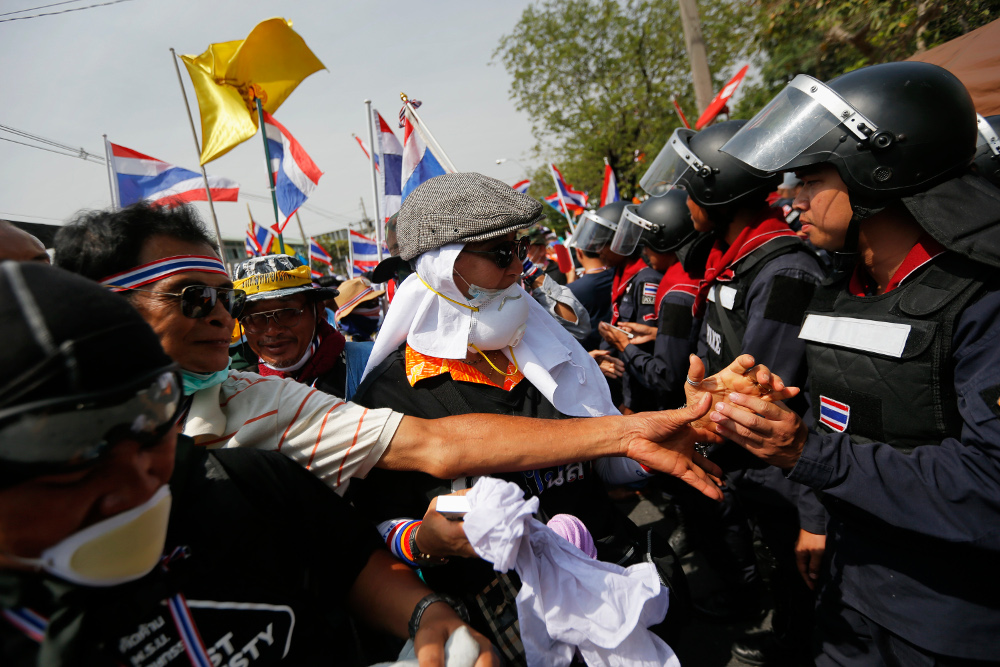 But, along with faint traces of tear gas, questions persist over how the hard-won breaching of police barricades would end the political deadlock.

As Thailand grapples with an uncertain future, it faces a fundamental question: can a crowd that dwindled to 9 000 protesters on Tuesday alter the results of a democratic election in a country of 66-million people? The speed with which street battles turned into smile fests suggested how quickly the country's dysfunctional politics could lurch back to violence again.

Temporary?
With Yingluck's government still in place, and thousands of protesters still occupying the finance ministry and other government buildings, the police withdrawal felt like a temporary de-escalation of tension before the 86th birthday celebrations on Thursday of King Bhumibol Adulyudej, revered by the protesters.

Yingluck shows no sign of heeding demands to either resign or call an election.

"The government is still doing its job," her deputy Pongthep Thepkanchana said.

"This is only a partial victory, it is not final," he said at a government complex in north Bangkok at which his supporters are camped.

At Government House, protesters swarmed over its lawns, but did not occupy the building, where soldiers were stationed.

"The fight isn't over, but we're winning."

'Good people'
The sudden refusal of the police to defend Government House might have made Yingluck look weak, but it has also stripped some of the symbolism from occupying the building.

By 11am on Tuesday, a large frontloader operated by protesters set about removing the concrete barricades protecting the Metropolitan Police Bureau headquarters, a short walk from Government House.

Protest guards linked arms to hold back an ebullient crowd.

"We don't want anyone to go inside and ruin government buildings, said Brenda Nong [51] a protester from Bangkok.

Nearby, as the frontloader made short work of the barricades, hundreds of police watched, ate lunch or dozed in the shade.

Through a loudspeaker, a police officer urged his men to greet the approaching protesters "with a friendly smile".

With noon approaching, the frontloader swept aside the last concrete barrier, and a thousands-strong crowd blowing whistles and waving Thai flags surged into the area.

Police flanked the roadside, forming almost an honour guard, as protesters clasped their hands together in a wai, the traditional Thai greeting, or shook hands or hugged their former adversaries.

Many people were visibly moved.

Protesters made no attempt to enter the police headquarters, where they were met by uniformed officers handing out red roses. 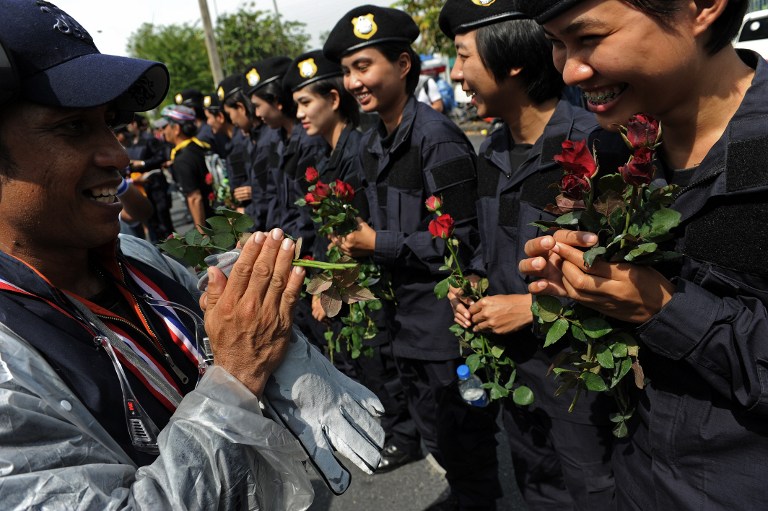 The protesters shouted "Long live the king!" and marched on, holding the flags and flowers aloft.

'Lame-duck minister'
Even if Yingluck didn't immediately resign, she was now a lame-duck prime minister, said 70-year-old protester Supradith, who wore a floppy sun hat and a black T-shirt saying "No negotiations. No talks. No Thaksin regime."

"Nobody will listen to her anymore," she said.

Protest leaders have vilified the police as lackeys of Thaksin, himself a former officer, but protesters claim to bear no ill-will towards the rank-and-file who manned the barricades.

"We are your friends," shouted a protester from a truck moving past police packing up their things.

"You can go home now. Your wives and children are waiting."

For now, Bangkok is saddled with the mother of all clean-ups.

Roads around Government House were clogged with burned-out or broken-down police trucks and littered with rocks and broken glass.

Volunteers, one using a police riot shield, were already sweeping up the debris on Tuesday afternoon, aware that their former battleground is also the historic centre for public celebrations of the king's birthday. – Reuters