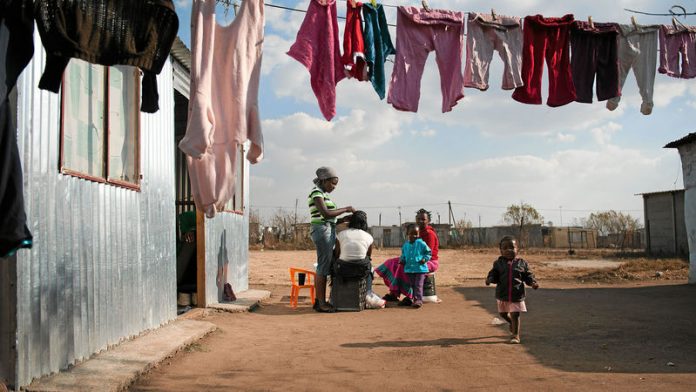 South Africa's poverty levels are decreasing and we are still largely a nation of labour migrants, if the country's first in-depth study into income and poverty is anything to go by.

Established by the presidency, the National Income Dynamics Study (NIDS) looked at over 28 000 people in three separate surveys from 2008, examining how certain factors affected their income and poverty levels.

The result of the third wave, as researchers call it, show that one in seven of the survey sample, which is representative of the population across provinces, had moved in search of work. And those who did, often improved their and their family's income.

About a third of who were poor when they were first surveyed in 2008 managed to fight their way out of poverty by the third survey, conducted in 2012.

'In severe poverty'
"However, a substantial proportion of the sample remained in severe poverty," said Planning Minister Trevor Manuel in his foreword to the study.

Poverty in this case is defined around a line of R636 per month, measured by the value of the rand in 2012.

The mammoth study, the first of its kind in South Africa, was conducted in conjunction with the National Planning Commission (NPC) and the University of Cape Town school of economics.

According to the commission, other national surveys like the national census offers a "snapshot picture" of South Africans at a certain point in time.

NIDS on the other hand "provides a 3D-movie of their [those sampled] lives that lets us step virtually into the shoes of various social groupings, see better for ourselves what the road ahead of them looked like from their point of view, and follow them through their journey as they set off into motion".

One case study told the story of an Eastern Cape family living in a rural area who managed to escape poverty between 2008 and 2010 when they were observed, thanks to "Zuleka", a 49-year-old woman who ran a household of six children, took on some small-scale agricultural work, received child support grants and got money from her husband working in Gauteng. Due to the money she made and received, the income per person in the house increased from just over R200 a month in 2008 to R700 in 2010.

But in 2012 the family was again below the poverty line. Three in the house were adults, neither employed nor eligible for a child grant or state pension. The husband's contribution from Gauteng had dropped sharply and 75% of their meagre income went towards food.

"As an older black women, her chances of finding her way out of extreme poverty is slim," said Manuel, as he related her anonymous story.

Accordingly, the study found the biggest "trigger event" that caused a shift in and out of poverty was a change in the head of the family.

NDP implementation
The study will give President Jacob Zuma's administration the leverage it needs to implement the NPC's National Development Plan. At the ANC's elective conference in December 2012 in Mangaung, Zuma announced that the plan would be something his administration would pursue, amid confusion between contesting growth plans from various government departments.

But the plan has been widely rejected by the left and trade unions. The onus is on former long-serving finance minister Manuel's department to win acceptance for the plan across multiple sectors of society.

The data produced from the NIDS may well allow the commission to show the need for their plan, which aims to overhaul various aspects of government and create 11-million jobs by 2030.

'Raise the living standards'
"We are talking to the converted when we talk to minister Manuel about the need for evidence," said a member of the study's steering committee, Khulekani Mathe. "Making policies informed by credible evidence is of paramount importance."

Manuel spoke at length about the value of policy-making informed by evidence and information.

In the foreword to the findings, Manual noted that 2014 marked 20 years of democracy. "There's going to be a lot of discussion about the quality of our democracy over the next few months," he added at the launch.

"The NIDS tells the story of four years within this period. It tells us that many challenges remain, and that some of our policy choices are having positive effects on the lives of South Africans."