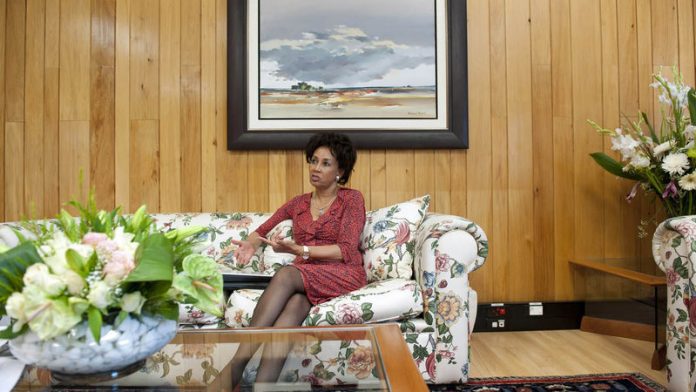 Minister of Public Service and Administration Lindiwe Sisulu is mourning Nelson Mandela, not only as South Africa's first democratically elected president and her political leader, but also as an uncle.

Sisulu is related to Mandela because her aunt, Evelyn Mase, was Madiba's first wife.

Even though she served as deputy minister of home affairs in Mandela's Cabinet and is one of the senior ANC leaders in her own right, to the late peace icon Sisulu remained one of the family children.

Besides being family, Sisulu said, just like many citizens of the world she saw greatness in Madiba and says that his legacy will stay with the world for a long time.

"He's obviously so big and it wasn't a coincidence, he was born big," she said.

"You actually need years to document his life. Just a day before he died I was called to address the launch of his book the Opus [that chronicles Mandela's life and times].

"Even that book doesn't begin to document his life. Once in a while history throws in these giants and he's one of them. With time we'll be able to celebrate his life in much more detail."

Close family
Sisulu's family has been close to the Mandela's since her early years and she said having that relationship put her in a better position to know and understand Madiba well.

"He married my aunt [Evelyn], my father's [Walter Sisulu] sister, so he was an uncle to us.

"Beyond that my father was so incredibly proud of him. It came to a point where my mom [Albertina Sisulu] would say, 'If you want to know whether we should think pink or green or yellow, ask your dad to ask Mandela'."

Mandela had influence in everything, including parents and children politics, Sisulu said.

"When we grew up my brother [the late Zwelakhe] didn't like combing his hair. We had kroeshare [a rounded, thickly curled type of hair]. Madiba came one day and found that there's a struggle to comb my brother's hair and he said just tell them, umThembu akakami (a Thembu doesn't comb his hair). That was the last time they ever brought a comb closer to my brother."

Sisulu said she believes Mandela passed on in a "dignified" way.

"I think it would have been Madiba's wish to go this way. The razzmatazz that we found at the hospital [when he was admitted and media camped outside Pretoria Mediclinic] is not what he would have liked.

"He wanted to go with dignity and he got that. He passed away at night in peace and by the time people heard that, they responded in a respectful manner."

Big screens
The Mandela family put up television screens outside the Houghton family home on Sunday, which continues to see an influx of mourners. The screen allowed everyone to follow prayer services that took place inside Madiba's house.

Sisulu gave reasons: "We've now found a way to incorporate them and we've put up a screen for people outside to join in our services and they sing louder than us."

It was because of the eagerness shown by ordinary people to support the Mandelas in their grief that the family decided to put up a screen.

"Two days ago I had to go on stage and calm them down and you could see they thought 'they're starting now, they want to control us'."

Sisulu has taken leave off her ministerial duties to spend this week with the Mandela family.

"We're a very close family. When my mom passed away, we didn't need for anything because we knew the Mandelas were there to support us all the time."

Sisulu vs. Ramaphosa: the ANC’s war of (stolen) words