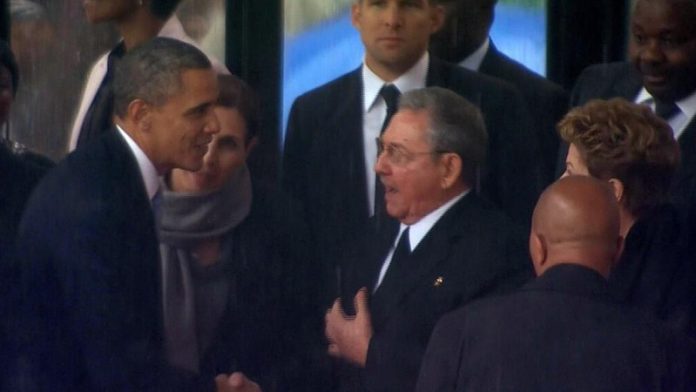 In a politically significant move, US President Barack Obama has shaken hands with Cuba's President Raul Castro at Nelson Mandela's memorial service on Tuesday at the FNB Stadium.​

The handshake between the leaders of the two Cold War enemies came during a ceremony that's focused on Nelson Mandela's legacy of reconciliation.

Obama was greeting a line of world leaders and heads of state attending the memorial in Johannesburg. He also shook hands with Brazil's President Dilma Rousseff, who has clashed with Obama over alleged National Security Agency spying.

Castro smiled as Obama moved to shake his hand on the way to the podium before making a rousing speech in memory of the former president, one of the world's great peacemakers, who died on Thursday aged 95.​

The last time a Cuban president shook the hand of an American president was in 2000 when Bill Clinton shook hands with Fidel Castro at a lunch for world leaders taking part in a United Nations summit.

Relations between Cuba and the United States have been frozen since soon after Cuba's 1959 revolution led by Fidel Castro, who handed over to his brother Raul in 2008 because of ill-health.

The US and Cuba have recently taken small steps toward rapprochement, raising hopes the two nations could be on the verge of a breakthrough in relations.

But sceptics caution that the two countries have shown signs of a thaw in the past, only to fall back into old recriminations.

Crowd
Torrential rain failed to dampen the spirits of tens of thousands of singing and dancing mourners at Soccer City, who gathered to say farewell to Mandela alongside 90-odd world dignitaries.

The crowd emitted a huge roar as Obama took his seat, in marked contrast to the boos that greeted President Jacob Zuma, whose weaknesses have been cast into sharp relief by Mandela's death.

Speaking yards away from communist leader Castro and Chinese Deputy President Li Yuanchao, Obama chided those who embraced Mandela's struggle against oppression yet suppressed opposition and critics in their own countries.

"There are too many of us who happily embrace Madiba's legacy of racial reconciliation, but passionately resist even modest reforms that would challenge chronic poverty and growing inequality," he said.

"There are too many leaders who claim solidarity with Madiba's struggle for freedom but do not tolerate dissent from their own people," he said.

African blessing
Coinciding with Human Rights Day, the memorial in the bowl-shaped soccer stadium – scene of the 2010 World Cup final – is the centrepiece of a week of mourning for Mandela, revered across the world as a symbol of reconciliation and forgiveness.

"He was more than one of the greatest leaders of our time. He was one of our greatest teachers," United Nations secretary general Ban Ki-moon told the crowd.

"His boabab tree has left deep roots that reach across the planet."

Since Mandela's death, Johannesburg has been blanketed in unseasonal cloud and rain – a sign, according to Zulu culture, of an esteemed elder passing on and being welcomed into the afterlife by his ancestors.

World Cup
The atmosphere inside the stadium before the ceremony was one of joy and celebration, more akin to the opening game of the World Cup three years ago that pitted jubilant hosts South Africa against Mexico.

The packed carriages of commuter trains heading to the ground swayed side-to-side with the rhythm.

"I am sure Mandela was proud of the South Africa he helped create. It's not perfect but no-one is perfect, and we have made great strides."

The ANC has, until now, always rejected going to the International Monetary Fund, which underscores how bad our economic situation is
Read more
Friday