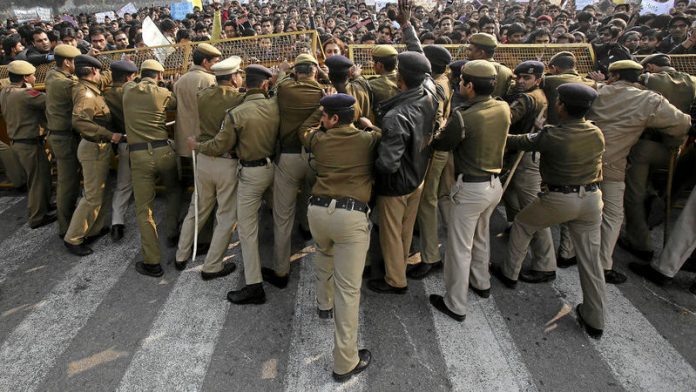 It took the police 14 days to register the rape allegation and 30 more days to make an arrest, by which time the victim had killed herself. The awful case of a 17-year-old kidnapped from her village in India and raped by two men in a field during Diwali's November celebrations emerged only after last year's horrific gang rape of another student in Delhi on December 16 2012 sparked international outrage.

The 23-year-old student was travelling home from the cinema with a friend when she was viciously attacked by six men on a bus. The woman died from her injuries 13 days later while undergoing emergency treatment in Singapore, in a case that sparked national and international protest.

A year on, it seems fair to ask what difference horrific cases such as these have made to the treatment of women in India.

The older sister of the girl from the small village in the Punjab who was raped in a field has said that, after the teenager tried to report the incident, police officials refused to register the case and then pressured her to make peace with the alleged rapists.

"On some occasions, the policemen would take her to the police station in late evening hours. They also tried to force her to withdraw her complaint."

The attackers threatened their victim and her family.

On December 26, the young woman swallowed poison just as protests were gaining momentum in Delhi. One news presenter said: "Even as Delhi streets are bubbling over with protests, it took the suicide of a 17-year-old rape victim for the police to finally act on her complaint. What good is that now?"

Others are asking the same question. The Delhi bus case appears to have encouraged more women to come forward if they have been raped, and for the media to report these allegation, but in many other ways little appears to have changed.

Soon after the Delhi rape, the government surprised everyone by quickly setting up a commission to update the law before accepting most of its recommendations (except, crucially, to criminalise marital rape).

But passing progressive legislation is very different to enforcing it, especially in a country where police corruption is widespread and legal bans on dowry payments and sex-selection abortionsare routinely flouted.

The latest annual figures available show that, of the 706 rape cases filed in New Delhi in 2012, only one, the most famous, ended in conviction.

Police in Delhi recorded 501 allegations of harassment and 64 of rape between December 16 2012 and January 4 2013 and yet just four inquiries were launched.

In the nine months to October this year, almost twice as many rape victims (1 330) have come forward, and four times as many allegations of molestation have been made.

One area that has changed in the past year is the national media.

"The media has raised awareness by default that India has a lot of gender problems. People are finally having conversations that were otherwise swept underneath the carpet. It is still not doing enough to educate the masses about violence against women, but the media conversation is finally moving in the right direction," says Krishna Khunti, a charity worker who lives in Mumbai.

Just last month, allegations of sexual assault at the respected investigative magazine Tehelka made news as its editor-in-chief Tarun Tejpal was arrested and questioned. Even its managing editor, Shoma Chaudhury, had to resign over accusations that she played down the controversy.

Although heightened media attention can spur politicians and the police into action, activists say it has also had the effect of challenging the shaming of women who have been sexually assaulted.

Some victims have even revealed their identities on television in a bid to raise awareness of the increasing numbers of sexual assaults.

The problems of sexual violence in India underlines the deep-rooted misogyny of a society in which men are valued more highly than women.

Back in 1991, the economist Amartya Sen estimated that Asia as a whole was "missing" around 100-million women. This discrepancy has only got worse in the intervening years. According to India's 2011 census, there are 37-million fewer women than men (about 587-million versus about 624-million). In countries where both sexes receive similar care, there are typically more women; the European Union has an average of 95 men for every 100 women, for example.

This gender gap is due to a toxic combination of feticide, infanticide, excessive neglect of girls, murder and destitution.

In northern and western states, especially in urban middle-class areas, it is not unusual for fetuses to be aborted before birth, simply because families don't want girls.

A girl under the age of five has 75% more chance of dying through neglect than a boy – the highest differential in the world.

Sehjo Singh, director of programmes at ActionAid India, says: "We have seen over the past decade that sex-selection services, which were once limited to urban areas, are now moving into rural areas. These services, such as ultrasonography machines, are also getting cheaper, which makes them more available to rural families. ActionAid is extremely worried about these developments and what it means for the huge numbers of girls who are killed in India before they are even born."

As the gap between the number of men and women keeps widening, men in some northern areas are finding it harder to find wives.

Nongovernmental organisations  report "a boom in sex trafficking" as unmarried men turn to prostitution, kidnapping or even buying young girls as "brides".

Signs of progress are limited. This week's elections in Delhi saw politicians compete on safety policies for women for the first time.

"The very fact that parties are debating women and their rights is a victory for the women's safety movement. This has never happened before," Sudha Sundararaman, general secretary of the All India Democratic Women's Association told the Wall Street Journal.

A survey in the DNA newspaper last week found that only 15% of women in the commercial capital Mumbai felt safe while travelling on public transport.

After the death of the 17-year-old rape victim, Punjab police belatedly sacked two officers for misconduct and charged another for abetting her suicide. The state judge said the judicial system was becoming so ineffectual and slow that violence against women was rising because criminals felt they would go unpunished.

The victim's family said the teen's final words were: "There is nobody willing to listen to us, mother."

Even a year after these horrific incidents, too many Indian women still feel that way. – © Guardian News & Media 2013