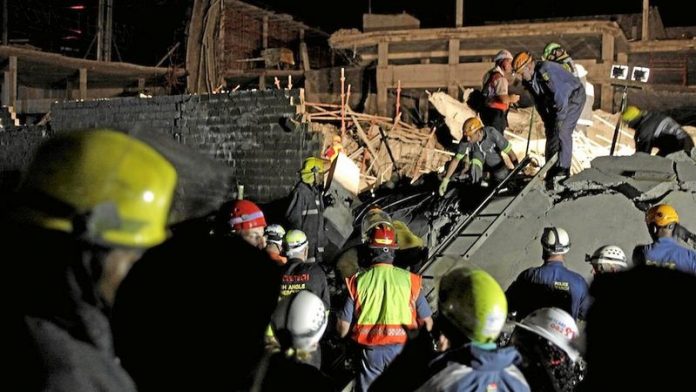 An internal audit report has raised major questions about a state-owned housing agency's payment of hundreds of millions of rands to a company allegedly linked to Jay Singh, the politically connected businessperson at the centre of the Tongaat mall collapse.

The report reveals that the company in question, Woodglaze Trading, received more than R336-million from the Social Housing Regulatory Agency for the Moko rental housing project in Phoenix in Durban.

It appears that the regulatory agency's board rejected the findings of its own audit department that Woodglaze was not accredited to operate in the social housing field and that procedures were not followed in funding it.

A due diligence report also found that many of the houses that were built with the agency's money suffered from structural defects.

A source within the agency told amaBhu-ngane that its chief executive, Brian Moholo, was suspended this week. Moholo could not be contacted for confirmation, and the agency's chairperson, Zora Ibrahim, refused to comment, saying: "I am not at liberty to discuss staff matters in the media."

Asked last week why the board had given money to a Woodglaze subsidiary despite the adverse findings of the agency's own auditors, Moholo would only say that the "matter is being investigated by the council and, in my view, it would not be prudent to respond before that process is completed".

The main function of the agency, which falls under the human settlements department, is to regulate and invest in affordable rental homes.

Woodglaze's sole director is Singh's ex-wife, Shireen Annamalay. Neither Singh nor Annamalay responded to amaBhungane's calls or faxed questions. However, a source within the agency alleged that she continues to represent his business interests.

Media reports have alleged that Singh has connections within the eThekwini municipality and local ANC structures.

The company is also the respondent in a court case brought by the Phoenix Tenants and Residents Association, which represents families who fear eviction from their houses after Woodglaze allegedly sold the land they stand on.

The saga has its origins in a tender awarded by the eThekwini municipality in 2008 to develop 2 281 housing units in Phoenix. The council provided the land, but did not fund the development. Woodglaze launched a section 21 company, Moko Rental Housing, to comply with social housing specifications and source the required R235-million from the regulatory agency.

Singh founded Moko in 2008, and resigned a year later. The remaining directors include Annamalay, their son Ravi Jagadasan and his business partner Pradeep Inderjeeth.

According to invoices submitted by Moko to the regulatory agency, Moholo and corporate services manager Eugene Perumal signed off on the payments. Perumal is a former Gauteng housing department chief director who was fired in 2006 after he allegedly illegally awarded three tenders worth R76-million.

Once the houses were built, in late 2012, Moko began negotiating to sell at least 13 of the complexes to an income rental housing company initiated by the eThekwini municipality, First Metro Housing, which approached the Social Housing Regulatory Agency to fund the purchase.

This had two sequels: the agency's board called for a due diligence report, which, in turn, sparked the investigation by the internal audit department, and the Phoenix Residents' Association took court action.

Illegal sale
Residents claimed that the sale was illegal, as an agreement between them and the municipality stipulates that the units are intended for purchase by the tenants and that Moko is not allowed to sell the land.

The due diligence report, carried out by SL Management Consultants and submitted to the board in February last year, recommended that the agency steer clear of the sale.

It said that funding Moko would deviate from the agency's policies and procedures, which include the requirement that the project should be sited in a "restructured" zone approved by the human settlements department.

The subsequent internal audit report noted that there were no minutes from the agency investment committee and council approving the disbursement of a provincial restructuring capital grant to Moko.

It also found that the land had been transferred to Moko at well below market rates, that municipal approvals were outstanding, and that critical supporting documents were incomplete or missing – notably technical certifications, building approvals and safety compliance approvals.

The source said the fact that both Woodglaze, as the developer, and Moko, as manager of the units, had the same owners was a conflict of interests. "This meant that, although the Social Housing Regulatory Agency paid the money to Moko, which is a nonprofit organisation, the money went to the same company."

Signed and approved
Despite the damning findings, the board voted to approve the sale. An additional R101-million was paid to Woodglaze to facilitate it.

It appears that the sale received backing from further up the political chain. AmaBhungane is in possession of a letter written by the head of the KwaZulu-Natal human settlements department, Mduduzi Zungu, specifically instructing the housing agency to give R101-million in provincial funds to First Metro.

The letter, dated February this year, states that the purchase of the social housing units from Woodglaze had been signed and approved by the provincial minister of human settlements, Ravi Pillay.

The source alleged the First Metro deal, an accredited institution, was pushed through to legitimise the relationship between the Social Housing Regulatory Agency and Woodglaze.

"The Social Housing Regulatory Agency has been paying money to a nonaccredited company for years and now all these investigations are taking place and they want to cover their tracks," the source said.

Meanwhile, Govender told amaBhungane that, while the government is funding Singh, some of the people living in the units in Phoenix fear that their houses could collapse at any time.

"You should see the conditions people live in here; it's really bad. The houses are falling apart because substandard materials were used. Remember that these complexes were built on landfill sites," he said.

Tongaat Mall
Two people were killed and 29 injured when a section of the Tongaat mall collapsed on November 19. Jagadasan is a director of the property developer that developed the mall, Rectangle Property Investments, and the contractor that built it, Gralio Precast.

The disaster turned the spotlight on Singh, who in 1997 was sentenced to 12 months in jail or a R6 000 fine for bribing a municipal housing official to approve shoddy work.

In 2003, Singh's Remant Alton Land Transport consortium landed a R70-million contract to run the eThekwini bus service. After allegedly running it into the ground he sold it back to the municipality for R405-million.

Last month, the National Home Builders Registration Council announced that it is investigating all housing projects under construction by Woodglaze and Gralio Precast.

The Manase forensic audit report on fraud and mismanagement in the eThekwini municipality, released in July this year, found shoddy workmanship in two low-cost housing contracts worth R86-million awarded to Gralio and Woodglaze.

Woodglaze was also in the media spotlight last year when one of its founding directors, Nomalady Ngwadla, claimed that she had been used as a front after being removed as a director without her knowledge.

According to media reports, the dispute was settled privately.