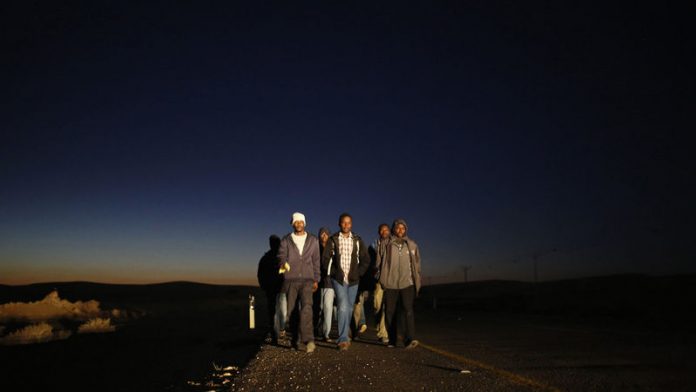 Angesom Solomon had to dodge bullets and tear his way through barbed-wire fencing to get into Israel across its border with Egypt after a two-month trek from his native Eritrea.

Six years on, he is married, a father and holds a coveted menial job in Tel Aviv. But a sense of security still eludes him, as one of 60 000 African migrants living in Israel who face indefinite jail time under a law Parliament passed this month.

Solomon (28) got a rare work permit that allows him to earn 6 000 shekels ($1 500) a month as a school custodian. It is due to expire next month and may not be renewed – a situation he fears would expose him to police round-ups as an illegal worker.

"I wanted to change my life [but] in Israel I am also afraid," said Solomon, who absconded from army conscription in Eritrea in 2007 to make the two-month trip via war-ravaged Sudan and then Egypt.

In Egypt's Sinai desert, he hid for two days while Egyptian troops fired at other African migrants, then successfully dashed into Israel.

At the time, he was briefly detained by the Israelis and then released into Tel Aviv, the coastal metropolis in whose lower-income south many Africans have carved out a tenement network including clinics, cafés and churches.

Israel's right-wing government has cracked down on the migrant influx, however, seeing a threat to public order. It fortified the Egyptian border fence and Prime Minister Benjamin Netanyahu pledged to deport migrants in Israel.

On December 10, Parliament approved a measure to incarcerate migrants indefinitely in new desert facilities under construction, unless they voluntarily leave Israel.

The measure describes the migrants – deemed by the government as job-seekers though migrants say they want asylum or safe haven – as doing "harm to Israel's social fabric and safety of its citizens".

Human rights groups and left-wing politicians denounce the amendment to an anti-infiltration law as undemocratic. They have petitioned Israel's Supreme Court to outlaw it. In September the court struck down a similar law that enabled the jailing of migrants for three years.

Israel grants automatic citizenship to Jews, while denying refugee or residency status to many others. Some social activists complain this is a result of discrimination while others cite a shortage of legislation governing immigration.

Hotline for Migrant Workers, an organisation that advocates for the Africans, accuses Israel of pressuring hundreds in its jails to accept pay-outs and leave. More than a dozen left earlier this year for Eritrea to win release from prison.

Israel baulks at repatriating Sudanese and Eritrean migrants given the dangers they might face in their native lands, and has said it was seeking other African destinations for them.

Despite the government's unwelcoming attitude, the left-leaning Tel Aviv municipality offers many of the migrants aid, such as welfare and education for their children.

Tel Aviv Mayor Ron Huldai scoffed at Israeli policy toward the migrants, saying on Israel's Channel 2 television in November, "can 50 000 people be a demographic threat? That's a mockery".

"The truth is they will remain here. They are human beings and I must take care of them," Huldai said.

A teacher where Solomon works arranged for him to be included in first-grade Hebrew classes. Swallowing his pride, Solomon attends, hoping language skills will open up new opportunities with which to support his 10-month-old child and his wife, a fellow African migrant who lacks a work permit.

"What's the difference how old I am? I just want to learn," he said. "You just have to live your life for today. Who knows what tomorrow will bring?" – Reuters